Cooking My Way Through the Torah 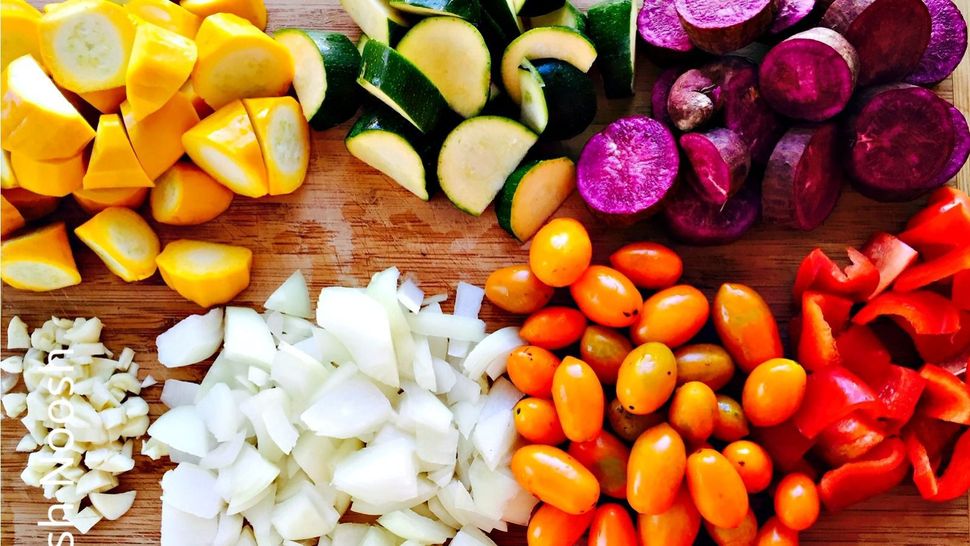 The chopped ingredients for “Joseph’s Technicolor Stew,” a dish inspired by the Torah portion Vayeshev.

As a foodie, I eat seasonally. But this year, my menus are planned week by week, and around more than just what’s available at the market.

I’m eating along with the cycle of the Torah readings.

Before now, I hadn’t delved deeply into understanding food and agriculture through a Jewish lens — aside from the occasional personal study and some learning at Hazon conferences. I’d certainly never studied the weekly Torah portion for an entire year straight.

Previously, I had way more questions than answers about what Torah teaches about food, hunger, agriculture. The only “answers” that I had were ones about which I’d already made up my mind: For example, I believed GMOs, industrial meat and junk food shouldn’t be kosher.

But I had no idea what Judaism actually teaches about these issues. I wanted to know what else the weekly Torah portion could teach me about contemporary food issues that I care about, like biodiversity, farm worker rights and childhood hunger. And as a chef, I wanted to take on the challenge of creating a recipe to align with the themes of each week’s parsha. I would blog about the whole experience, too.

It was time to delve deeply into texts. And step into the kitchen.

Consider, for example, the Torah portion of Chayei Sarah (Genesis 23 to 25), which concerns itself with the life, death and burial of the matriarch Sarah, and her son Isaac’s subsequent marriage. What do the themes of life and death seen in Chayei Sarah have to do with food?

I created a recipe for that parsha filled with foods representing both life and death. The main ingredients are beets and shallots, which grow deeply in the Earth, and mushrooms, which grow in dark, damp places. The finely chopped nuts are dust-like and symbolize what we each become when we return to the Earth. Beet greens, which grow above ground, represent life, growth, and renewal.

Here’s another question I’ve contemplated this year: how do I address “the other” in our society? To me, “the other” is the undocumented farm worker who plants and harvests our food. He or she is poorly paid, lives in the shadows of our society with few legal protections and performs strenuous work for our nation’s multi-billion dollar agricultural industry.

Vayera, another Torah portion from Genesis, examines our connection to “the other.” The recipe I created in its honor comprises two roasted pepper dips that one can eat with breads, as a reminder of the breads that Sarah and Abraham offered the three strangers (Genesis 18).

But later in the parsha, Abraham and Sarah expel Hagar (Abraham’s concubine), who departs with Ishmael, the son she bore with Abraham. Isaac and Ishmael are separated. Soon after, God commands Abraham to offer up Isaac as a sacrifice on Mount Moriah, but at the last minute a ram is sacrificed in Isaac’s place.

These roasted pepper dips are made with the same ingredients in different colors to represent the two brothers — Isaac and Ishmael — and are sprinkled with sesame seeds, symbolizing their shared father. The dips are surrounded by greens that represent the bush under which Hagar left Ishmael, and the thicket where the ram was caught and used on the altar instead of Isaac.

My year-long project is helping me learn to find God and connections to the Torah in the most mundane acts, whether plucking tomatoes from my garden, creating a dish or talking to a farmer at the market about his struggles during California’s epic drought. I’ve come to realize that every time we eat, we have the opportunity to bring the light of Torah to the darkest corners of our society: whether it’s our agricultural fields, hungry people’s bellies or slaughterhouses. My yearlong project has inspired me to act.

Cooking My Way Through the Torah