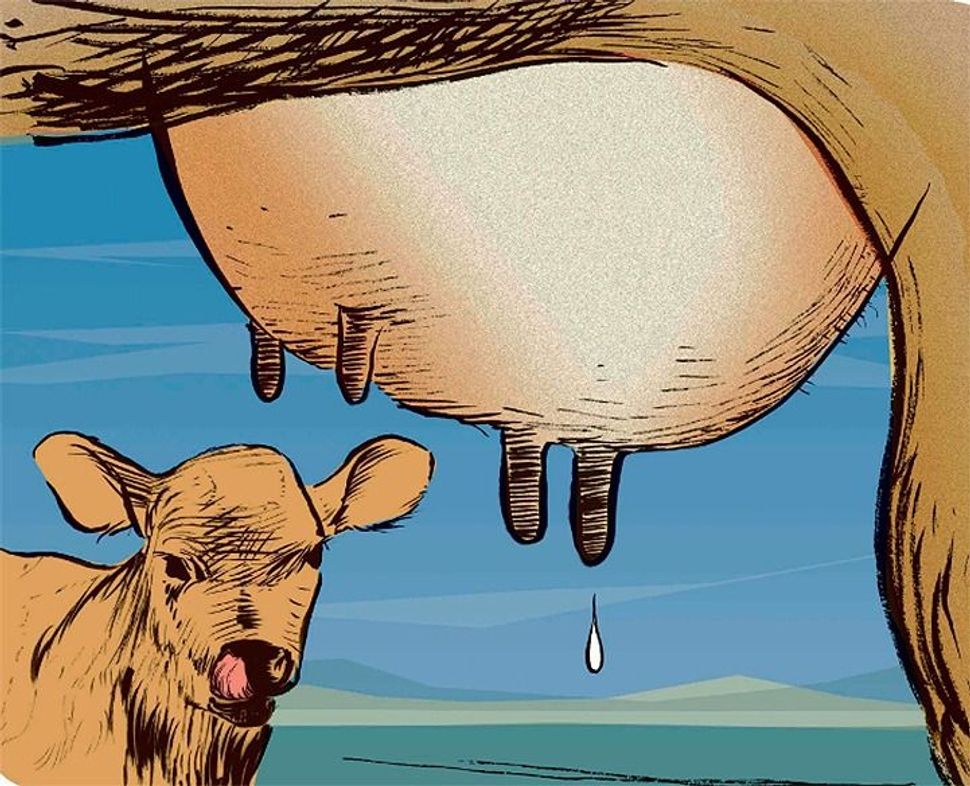 This is the fourth in a series of pseudonymous essays by The Treyfster. The pieces explore the forbidden milk and meat foods from the point of view of a person who used to keep traditionally kosher.

I once spent an hour or so meditating on the biblical verse from Exodus 23:19 “You shall not boil a young goat in its mother’s milk” or: “Do not seethe a kid in its mother’s milk.” Properly meditating as I was in a very sincere, religious part of my Jewish life and wanted to get to the bottom of this rather opaque, symbolic sentence.

I should have known better; there’s something essentially slippery and bottomless about all ancient and biblical writings and particularly this one. This sentence, and its interpretations, probably causes half the trouble for frum religious Jews today in navigating the world (and certainly a lot of the expense). Imagine Jewish Orthodox frumkeit without two sets of crockery and cutlery, without worrying about mixing milk and meat.

What does it mean? It’s almost absurdly specific: Don’t cook a baby goat in the milk that literally came from its mother. You’d have to try really hard these days to achieve that. You’d have to first get your own goat, then you’d have to raise your own kid goats. On that level, it’s as redundant as the stern warnings against worshiping the Asherah (mother goddess) or passing your children through the fire of Moloch.

Of course, this Torah passage has been interpreted more broadly than that. Astonishingly so. Has any tiny injunction ever borne such a great tree of extensions and prohibitions? Not only a child, but also any meat. Not only the milk from its own mother, but all / any milk product from any animal. Cooking a chicken (which doesn’t even lactate) in cows’ milk (which couldn’t give birth to anything resembling a chicken) is forbidden, under the grand extension of kid seething.

My first foray into basar ve’chalav , the Jewish kosher dietary laws of mixing milk and meat, was similarly tame. I sprinkled Parmesan cheese onto a duck risotto. I ate the risotto in a paper bowl, with a plastic spoon and then threw the remnants in the outside bin. It was pretty good: rich and flavorsome and tangy. They flavors do add something to and complement each other quite nicely. Though I’ve never been particularly excited by the classic cheeseburger, pretty much any dish is made better with a spoonful of good butter, and creamy buttered vegetables with a steak are a delight.

Still, though, this curious verse seems (when you meditate on it for an hour) to be telling us less about what foods we should eat than it does about motherhood and the compassion demanded between mammals.

When I visited India a few years ago, my guide told me the “real reason” (a folk reason) for the veneration of the cow. “My parents told me the cow gives milk, so she is like your mother. Treat the cow as you would treat your mother,” he said.

Milk was a late addition to the human food diet. We probably started consuming dairy after the last Ice Age, only about 11,000 years ago. There was something troubling about it for us, evidently. Milk is what you get from your mother. This animal is giving you something like what your mother gives you. It’s as if you are the milk provider’s child, as if it is your parent, as if its kid is your sibling. So perhaps treat that milk giving cow like you’d treat your mother. Or perhaps just try not to desecrate that whole relationship by cooking the child’s meat in the food that its mother made for it.

So although I’m not giving up my butter chicken masala, I certainly won’t be going out of my way to seethe an actual kid or its meat in its actual mother’s milk.

In this way, I feel I am still respecting the Jewish dietary laws of mixing milk and meat.