High Holiday Happenings and All the Weekly Dish

Image by Courtesy of Harry & Ida’s Meat and Supply Co. 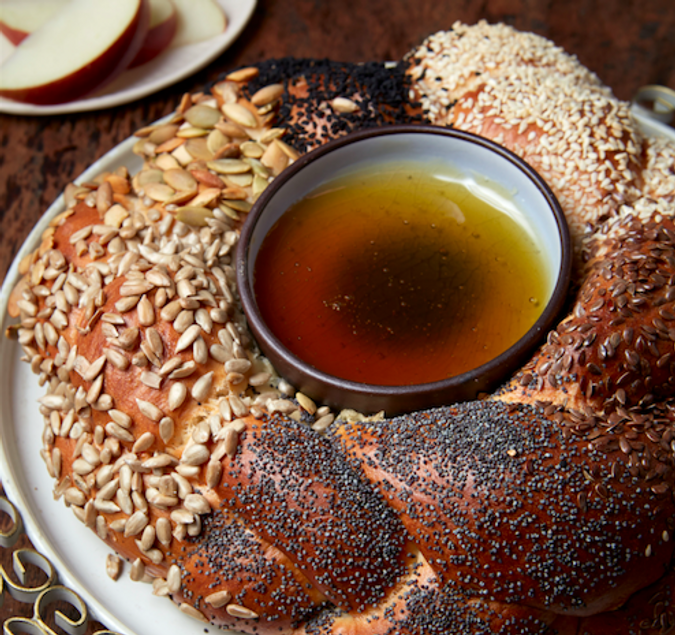 Holidays come early to Breads Bakery, which is offering its festive challah (above) and other Rosh Hashanah items starting Friday.

You don’t have to wait until Rosh Hashanah to sink your teeth into High Holidays goodies at Israeli-owned in Manhattan.

For the new year, the popular bakery’s also offering Middle Eastern sides like hummus, matbucha (tomato sauce), tabbouleh with pomegranate and Moroccan carrot salad. Plus, a number of classic items — including babka and rugelach — will be available nationwide through FoodyDirect.

Rosh Hashanah Dinner for 10 — to Go

At Fischer Bros & Leslie on Manhattan’s Upper West Side, this year’s edition of Rosh Hashanah dinner — a meal for 10 – will include haimish-sounding chicken soup with matzo balls, gefilte fish, turkey, veal or brisket, tzimmes, Israeli salad and dessert. And that’s just a partial list. The whole shebang starts at $350; order by September 2.

Founded by Holocaust survivor Leslie Niederman, and now owned by his son-in-law, this kosher butcher and prepared-foods shop has been plying its trade since 1949.

Sephardic in the Heartland

Image by Courtesy of Harry & Ida's Meat and Supply Co.

That’s the word from foodie site The Daily Meal, which declares that the “best pastrami sandwich in the universe” comes from East Village nouveau-deli hotspot Harry & Ida’s Meat & Supply — and that neighbor Katz’s “is worried.”

Harry & Ida’s pastrami “is celestial,” moans The Daily Meal. “Thick, chopped fatty deckle (not barbecue) is brined to make the perfect sandwich. Pickle spears, mustard and dill are rolled together on a light yet rye bread-like roll to be consumed while walking or, better yet, leaning over the one small counter in the shop.” Perhaps there’s a taste test in our future. Stay tuned.

“New York bagel places are giving us way too much cream cheese, and it makes no sense,” writes Gilad Edelman. “Employees at a few Manhattan shops told me they add a quarter-pound, which is insane. A representative of Ess-a-Bagel, the East Side institution, said staff there are told to give about 3 ounces — only slightly less insane.”

One maven recommends “a modest half-ounce of cream cheese for a bagel with lox, and perhaps up to three-quarters of an ounce” without lox. “That many places put six times that amount on one bagel is more than a culinary faux pas; it’s an economic mystery, Edelman carps.

Tzimmes in the Park

Labor Day will be busy for Masbia, the New York City soup kitchen network and food pantry. The organization plans to station head chef Ruben Diaz at the Union Square Greenmarket for an all-day tzimmes-cooking marathon. In connection with the event, Masbia has created a booklet of tzimmes recipes from 30 NYC food luminaries, which will be available for free. Masbia says that it’s bracing to give out 40,000 pounds of food between the Thursday before Rosh Hashanah and the Thursday of Sukkot. Donations are being accepted here.

Our Powers of Premonition

So Sadelle’s has hung a shingle at 463 W. Broadway, and even leaked details of its insane, afternoon-tea-inspired smoked-fish tower. (A little goyish perhaps? Nevermind.)

But the Forward called New York’s nouveau-bagel moment long before mainstream media got there.

Back in January, our former food editor, Devra Ferst, reported on the bagel “renaissance…courtesy of a handful of dedicated food artisans,” including the crew of Sadelle’s, which hadn’t even been named.

You can read more Ferst at TastingTable, where she’s now an editor.

High Holiday Happenings and All the Weekly Dish