Making Wine at the End of the World 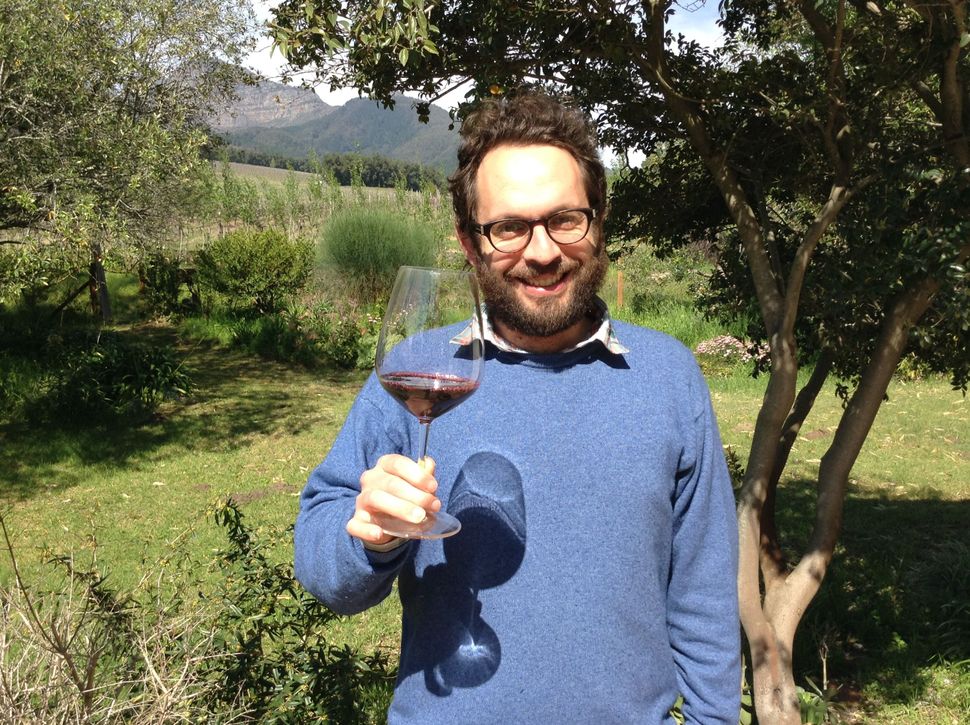 Simon Back, who is among the fourth generation to helm Backsberg Wines & Estates, stands on his deck in Paarl, South Africa, raising a glass of Merlot with his merlot vineyards behind him.

When there is very little between you and the Antarctic, making wine is a challenge. When there are relatively few Jews, making kosher wine is a bit more of a challenge. When those Jews come from a mishmash of backgrounds including Portuguese, Dutch, English and Lithuanian, the wines must be able to appeal to a wide range of palates and plates.

“The owners are doing this out of a sense of service to the Jewish community, a sense of duty,” said Jean van Rooyen, 46, the winemaker for Kleine Draken, South Africa’s only all-kosher winery. Mendal Kaplan, who owned a steel company, bought the vineyards that were to become Kleine Draken in 1983 as a service to the Jewish community. His brother, Robert, and another director at the company, Nathan Friedman, took on the job of overseeing the winery. The aim remains to produce kosher wine at a reasonable price. At the time, all kosher wine was. At the time, all kosher wine was imported — and it was expensive. 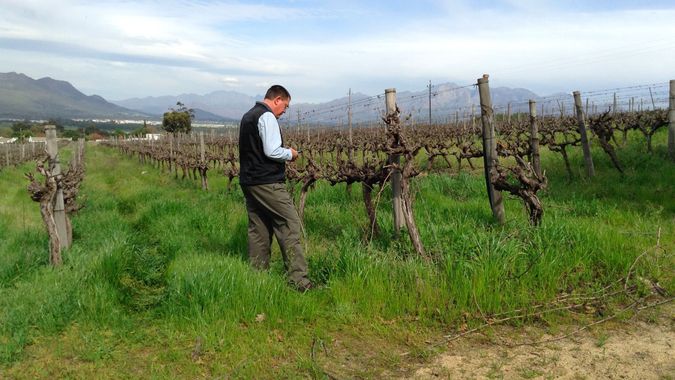 There are just 70,000 Jews living in South Africa, down from a high of 120,000 in the 1970s. Of those who remain, most are descendants of the Lithuanians who fled pogroms around the turn of the 20th century. They are also mostly Orthodox, but not everyone drinks wine, so the result is a very small domestic market.

“Yes, it is not a good business model,” laughed Simon Back of Backsberg Wines & Estates, another South African winery that produces several kosher wines. A member of the fourth generation to own and work the estate, Back, 31, studied finance and economics and is more of a marketer than a winemaker. As a result, Backsberg exports to the United States and Europe, so it is possible to buy its wines — Chardonnay, Pinotage, Merlot, Kiddush and a sparkler they just started making in 2011 — in the New York metropolitan area. 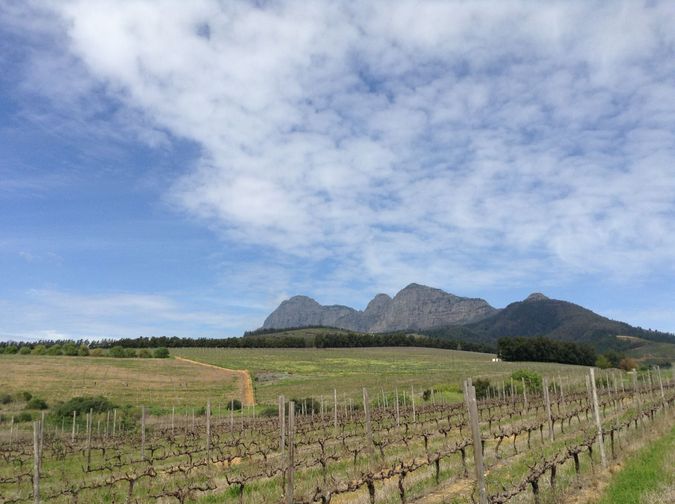 The merlot vineyards of Backsberg Estates.

“Making kosher wine is an involved process,” Back said. “Starting with the harvesting of the grapes, anyone (Jews and non-Jews alike) is allowed to pick the grapes. Once the grapes come into the cellar, their skins broken and the juice exposed, however, only observant Jews are allowed to handle the production of the wine.”

Mannie Eini, an Israeli who immigrated to South Africa nearly 30 years ago, serves as the mashgiach for Backsberg. A Sabbath-observant Jew who was trained by a rabbi when he first arrived, Eini is the only one who handles the grapes in the cellar until their juices are flash pasteurized, which renders them mevushal (cooked). Then anyone can help with the fermentation process and turn what is about 800 gallons of juice into wine.

Both producers’ wines carry the Orthodox Union Certificate and the Cape Beth Din Kosher Certificate; and they each face the vagaries of Mother Nature — too much rain, not enough rain; too much heat, not enough heat. “In terms of animals,” Van Rooyen said, “birds are probably our biggest concern.” Birds are a major problem for wineries the world over. They love grapes and can consume most of a vintner’s crop if left unprotected.

At least they don’t have to worry about the penguins, Back said, laughing. His vineyards are less than 60 miles from a flock of them at Boulder’s Beach near The Cape of Good Hope.

“Making wine is a passion for us,” said Back, a self-described secular Jew, whose family business will turn 100 next year. “We make wines to provide pleasure and enjoyment and … with a high level of drinkability.”

He recommends pairing Backsberg kosher pinotage with his grandmother’s brisket with carrot tzimmes. (The recipe is here.)

Van Rooyen, who has 20 harvests under his belt, aims to make his wines fruity and easy to drink — and to provide good value. He is not keen on wine-food pairing. “ I would like to think that I want people to drink whatever wine they like,” he said.

The odds of a third winery joining the kosher market niche are slim. But Kleine Draken’s determination and Backsberg’s passion for wine does mean the Jews of South Africa will have kosher wines — and not just for Shabbat — for generations to come.

A former Reuters journalist and a qualified sommelier, Leslie Gevirtz has been reporting and writing about wine for the past decade. In addition to Reuters, her stories have appeared in Meininger’s Wine Business International, Le PAN and wine-searcher.com.

Making Wine at the End of the World