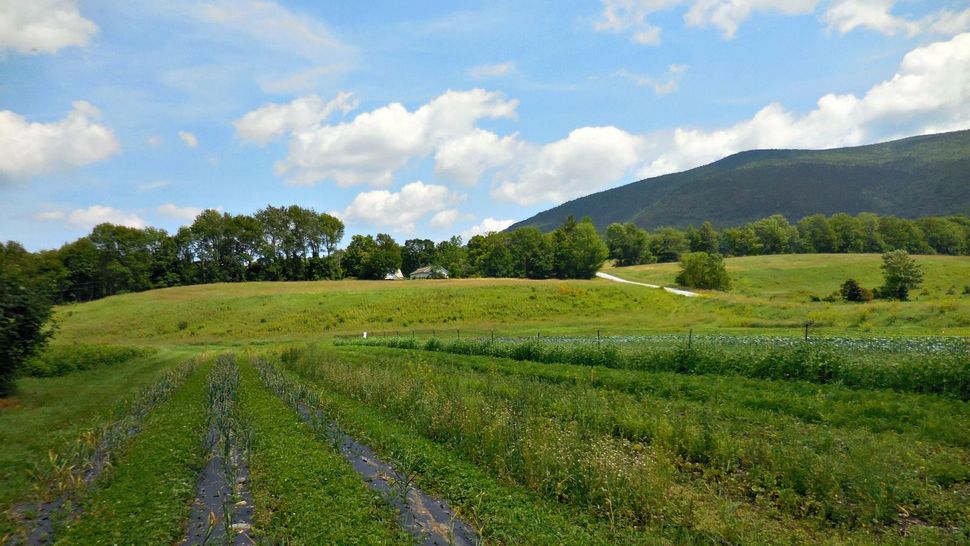 A surprising religious journey awaited Shira Wolf in the rolling fields of this sustainable farm in Danby, Connecticut.

I’m a nice Jewish girl. I’ve lived in New York City, gone to synagogue, and attended modern Orthodox Jewish day schools my whole life. Which is why it struck many of my friends and fellow community members as absurd – hell, it strikes me as absurd – that instead of opting to spend the summer after my high school graduation as a babysitter or counselor at a Jewish camp, I decided to stuff a season’s worth of possessions into a 65-liter backpack and work fifty hours a week on a sustainable farm in Danby, Vermont, for a family I’d never met in my life.

I wasn’t exactly trying to rebel – if someone had asked me the day I boarded my train why I wanted to learn to farm, I probably would have said something about getting myself back to the garden, or the importance of organic food – but I certainly didn’t anticipate that moving chickens and mowing strawberries would bring my agnostic self closer to God and Judaism. I could not have been more wrong.

For a family farm in one of the most rural parts of the United States, I found myself part of a surprisingly diverse crew of farmhands. My roommate was a proud Southerner and devout Christian who seemed crestfallen to learn that I was not saved. My second roommate, who left on a road trip to the Rockies a week after I came to the farm, was a New England-raised political activist and a staunch atheist. Up the road from us lived a Spanish-Mexican woman and her Cajun husband. Our manager, born and raised in Nepal, had traveled all over the world and subscribed to numerous fringe conspiracy theories.

Five days a week, we’d all wake up at 6:30 a.m. and work hard until five o’clock. Discussions about God were inevitable, and being the only Jew anybody in Vermont had ever met, I found myself having to answer more questions about Jewish practice and beliefs than there were weeds among the garlic rows, chicks in the barn, kernels on the corn cobs. I was forced to question the motives behind my practices before an audience that really wanted to see me eat meat (“If you don’t mind slaughtering it with us, why won’t you eat it with us?”), explain Jewish attitudes toward the coming of the messiah to an Evangelical Christian family, and ultimately, to affirm my belief in God.

More practically, I found that farm work helped me better understand the role that God plays in daily life. I watched our carrots grow from tiny green shoots the size of parsley to giant, bright orange vegetables, for sale at two dollars a bunch. I looked after our chickens as they changed from fuzzy yellow chicks who cuddled under heat lamps to five-pound roosters who strutted around their free-range cages like kings. God’s hand seemed undeniably apparent when I was able to observe the miraculous journey of food from seed (or hatchling) to store.

On the other side, though, the fragility of the process made me appreciate it even more, as it was often disrupted: for a few days in mid-July, deer visited the farm after dark and ravaged our carrot rows. One very cold and rainy June night, a few chickens froze to death. We had no way of knowing what blessing or curse would hit the farm next, we could only put up the electric fence, feed the chickens, and pray. When I looked at my dinner plate of farm-fresh food after a long day at work, I found that I finally understood the importance of saying blessings over food. I thanked God that the beetles didn’t kill this squash plant, or just marveled at the size of the onions in my fried egg, when just a week earlier we hadn’t been sure if the onion crop was going to survive. I’d read it all in high school science books, but after observing firsthand to the fragile process of shepherding food from the earth to my plate, it was impossible for me to eat my meals without accepting that a higher power was at work.

Working on the farm also allowed me to better understand why Jews do some of the things we do. Shabbat was always a very difficult day for me as a city kid. I never felt that it was a special day – it was just twenty-five hours of wearing a skirt and not being able to do anything I wanted to do.

On the farm, I knew Shabbat would be different (I didn’t even bring any skirts), and sure enough, I was unable to observe it to the same extent that I had growing up. However, on a Friday evening at the summer’s end, I felt something indescribably powerful while preparing to head home with my roommate after working a fourteen-hour day, leaning against the bed of our truck while he wrote a quick note to our manager, looking over the rows of slowly-growing vegetables, past the grassy field where the chickens pecked at their grain, up at the infinite blanket of stars – watching all of Creation doing what it was meant to do – while I, for one, could finally rest.

Shira Wolf is a first-year environmental science major at the University of Vermont. In her spare time, she enjoys writing, playing and listening to music, and spending time in the great outdoors.