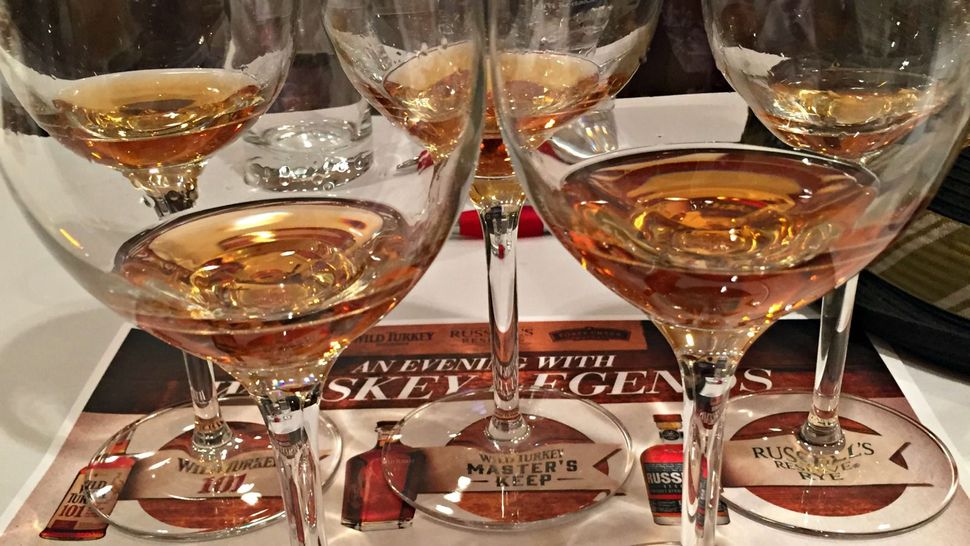 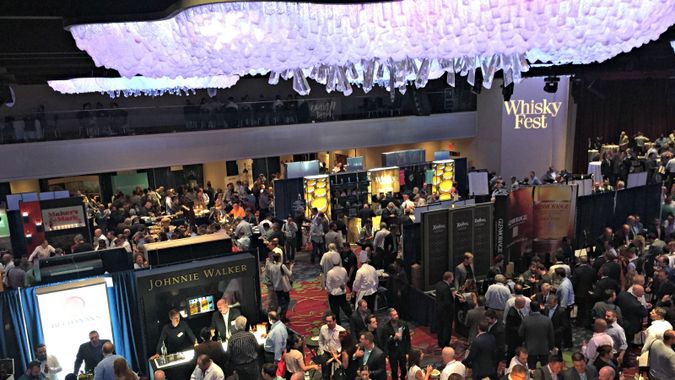 To be fair — as the reconstruction of George Washington’s distillery has amply shown — plenty of middle-aged white founding fathers were sipping on the golden nectar as the republic was being built.

So don’t blame the nectar.

Still WhiskyFest 2015 in New York was a salutary reminder that the corporate world has its sights firmly set on the 1% — and those American dreamers who aspire to join them. This is good business sense but it leads, among other things, to an ever-stronger curtain between first-class and the other classes. For example, judging by the swollen line of 35–60 year olds who had dropped up to $330 for the VIP ticket, this year’s WhiskyFest was for Very Important People only. Also noticeable was that it was a Garrison Keillor crowd, that is to say very few of these important people displayed what, at college, we used to call “diversity” — let alone what we continue to call “femininity.” 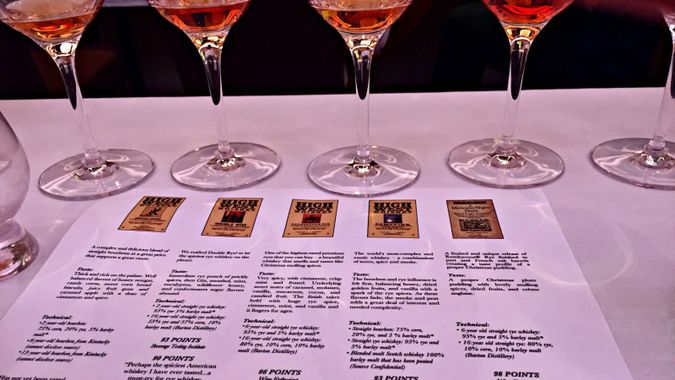 Not to digress entirely from the whisky — and we shouldn’t because there was some spectacularly good nectar to sample. The was an exquisite spirit — what caramel ambrosia might taste like in the Scottish section of Olympia. I overheard a fellow attendee describing it as “life-changing” and, although I wasn’t sure how he or I would change our lives having tasted scotch that is worth every penny of its $600 a bottle price-tag, I knew what he meant. 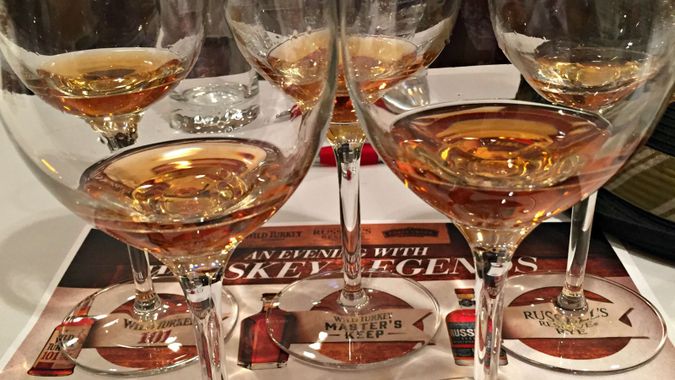 Wild Turkey tasting samples for the “Legends of Whiskey” seminar.

The Hibiki 21 was another treat of the VIP hour. Multiple award-winning, it was sweet and grapey with a hint of smoke. And, as well as giving us a sneak preview of what might become their 2016 Private Edition (an absolute delight, with notes of orange spice and salt toffee, with a sweet spot low on the palate), the standing room only seminar with Glenmorangie’s deeply quirky, charismatic and gifted ‎Head of Distilling & Whisky Creation, Bill Lumsden, was entertaining, intellectually satisfying and eye-opening.

But even the whiskies themselves were tellingly divided into the haves and the have-nots. In this case the haves were mostly old-name scotch single malts, and what they “had” was crowds eager to sample rare and expensive expressions. The have-nots were the young American whiskies left bereft of interest until VIP hour was over and attendees had tried the brands they recognized, had loaded up on the buffet and were ready for another round, this time of exploration.

I tried the Four Grain whiskey (with an “e”!) at the Koval table, empty except where the stragglers from Bruichladdich a little further along and the Macallan table opposite were backing up to it. There had been so few visitors that the exhibitor even seemed a little embarrassed that I’d chosen to visit his table. I wrote about their first visit to WhiskyFest in 2011 when the expressions were still a little shrill and reedy and I was happy to taste the warmer fuller flavor at age 4.

Also highly worth of mention was a Ladyburn 41. The Ladyburn distillery produced some of the most delicious whisky of the Lowlands in the decade it was open (1966-1975), but single malt bottles are rare. So, though it’s not really worth $2,000 a bottle, its complex honeyed sandalwood profile was — if not life-changing, then without doubt life-enhancing. 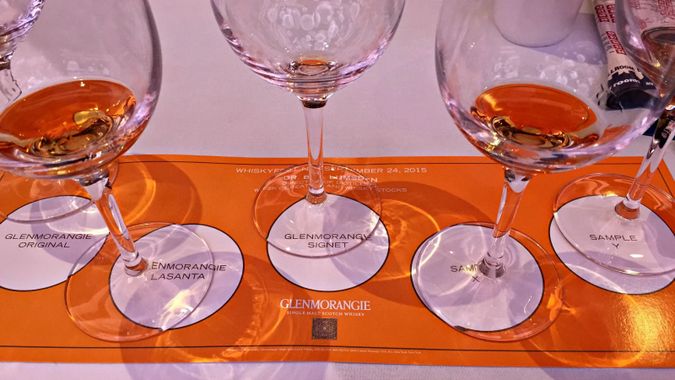 There were notable exceptions to the de facto elitism of the scotches. (I say de facto because these salesmen and company spokesmen were happy to sell the tastes and the ideas of their drinks to anyone who asked.) For example, the biggest line of the night was a slow-moving mass of people maybe eight wide and 40 yards long for a taste of Old Rip Van Winkle’s Pappy 23 year old. Another label whose scarceness makes it $2,000 a bottle, Pappy 23 is an extremely rare bourbon which I didn’t have the opportunity to taste. Dear Reader, I apologize, I had to make some choices on your behalf!

There was also a big crowd for Jimmy Russell, the genius who has been making whisky at Wild Turkey since 1954 and who has presided over their production for decades. His no-nonsense commitment to excellent organic ingredients, a particular, simple process and excellence of flavor has led to a clean, sweet, dependable bourbon and left his son, Eddie, only more experimental ways of expanding. The original expressions Wild Turkey 101 (sharply eye watering with vanilla and caramel undertones) and Russell’s Reserve Rye (spicy with an anise overtone) were both lovely and sweet. However, the bourbon matured slowly over 17 years in the “newly acquired” brick warehouses, Masters Keep, was intense and, to be frank, sort of horrible.

Exclusion is the key to elitism, whether you are curating an excellent media outlet, a whisky expression or a trade show. Exclusion, though, is also key to maintaining the increasingly suspect ideology of Lake Wobegon, whose children are all above average. But there are two crucial differences between whiskies and children. The first is that, unlike children who are judged on a relatively narrow set of scores, there are whole categories of criteria relevant to judging products produced from a mature process and intended for a mature market.

The second is that it’s acceptable to judge, rank and exclude commodities because, well, they are just things. When a country that can’t tell its corporations from its citizens starts excluding whole swathes of children except insofar as they make the privileged children look gifted, that’s a problem. Few people privileged enough to have a VIP WhiskyFest ticket would take it as a marker of superiority over non-attendees or general admittees, more of a question of priorities.

WhiskyFest reflected the tendencies of broader society toward elitist exclusion; it didn’t exacerbate them. But the nature of elitism is to valorize the elite. Whisky, the people’s drink, is happily flirting with being labeled an elite commodity. And, while hipsters might welcome the neo-retro rye whiskies for their cocktails, there are barrels of new tequilas, new rums and vodkas clamoring at the gates.

Dan Friedman is the managing editor at the Forward.