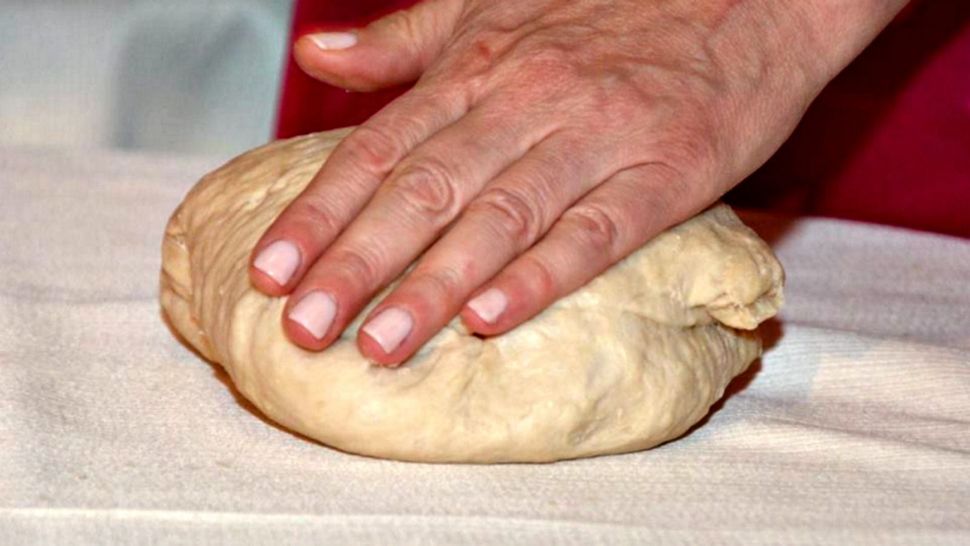 The Rockleigh Country Club looked like it had been transformed into a giant, glitzy bakery.

Tables in the posh banquet hall were decked out with mixing bowls, spatulas and zipper bags in which all the ingredients for a water challah had been carefully measured out for each cook — all 1,400 of them. 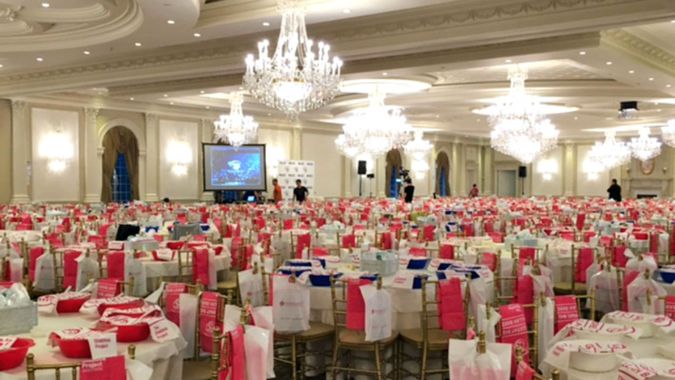 It was the Northern New Jersey Great Big Challah Bake.

Scanning the room, I was awed by the throngs of women who had descended on the facility, some by the busload. The women arrived in all styles of dress, representing a vast cross section of the Jewish spectrum, and they ranged in age from elementary school students to senior citizens.

Despite our differences, we had all come together for the same unifying goal: to bake challah.

Challah, of course, is the braided bread traditionally served at the Sabbath table. It contains a holiness that differentiates it from any other variety of bread. This Jewish soul food, according to tradition, is a medium for special blessings. Baking challah is a unique mitzvah given to women, which provides an opportunity for the blessing of “hafrashat challah” (separating the challah).

The moments during the kneading and recitation of the blessing are considered propitious times for prayer. In fact, some believe that it is a segulah, or good omen, for a crew of 40 women to bake challah for someone who is ill. This extra spiritual component may be the impetus for some who have taken up the task of baking it, despite the fact that challah can be readily picked up at the local stores.

I was never much of a challah baker. Making it is a task that demands reservoirs of patience, as well as physical strength. Though I tried my hand at it a few times, I was rarely content with the outcome. The perfect texture and shape continued to elude me. And the required mixing, kneading and rising made the process an arduous one. It was a lot easier just to purchase loaves at nearby bakeries so that my husband and children could debate the various merits of the chocolate-chip-and-cinnamon challah versus the whole wheat or egg one.

But when my friend Debbie Rosalimsky, an organizer of the event (along with WIZO-NJ and a crew of volunteers from around New Jersey), told me about the Challah Bake, I was intrigued.

The extravaganza was born two years ago as part of The Shabbos Project, which was the brainchild of South Africa’s Chief Rabbi, Warren Goldstein. His aim was to encourage Jews from all walks of life to observe a single Sabbath together. The initiative quickly evolved from a local grassroots movement into an international phenomenon with events for roughly one million Jews around the world — from Costa Rica, Zurich and Brazil to Manhattan — who were reminded of their shared roots.

A group of over achievers at a Brooklyn Challah Bake set the Guinness World Record and earned newspaper headlines for baking the longest challah loaf, a 20-foot-long, six strand egg challah. And photos of smiling friends and family who were participating in challah bakes in Miami, Chicago, Los Angeles and Tel Aviv appeared on my Facebook feed.

A woman named Jody, who attended a Challah bake in Toronto, wrote on Facebook that “it tasted exactly how my bubby used to make her challah. I was never able to get the recipe from her before she passed away. But tonight I got it. From now on, my Shabbat dinners will be complete.”

And a participant in Chicago wrote to organizers, “I want to thank you so much for helping us to reconnect with our roots. The disconnect will end here. I only hope that I can learn to be a good Jewish mother and grandmother. I thought I would send you a picture of my first Challah!”

My friend Debbie, a weekly challah baker who lives in Teaneck, told me that the spiritual aspect of challah baking makes the process far more meaningful than any other culinary experience. “Making challah gives me the opportunity to bring holiness into my home. When I knead the dough, I daven for people who may have health, personal or financial concerns, or issues with their children,” she said. “Also, there’s nothing like the aroma of fresh challah in the oven. My family looks forward to eating homemade challah every week.”

She told me that she only began baking challah a few years ago, when she attended a Challah Bake in New York and opted to bring the mitzvah into her life. As one of the organizers of the event, she hoped the challah bake in New Jersey would do the same for others.

I was skeptical that it would do much for me. But it sounded like a fun night out. As I ambled into the room, I spied old friends: my dorm counselor from college, pals from my days as a single and newlywed, and neighbors from my previous home. The tradition of challah was bringing everyone together.

An old friend, Rabbi Claire Ginsburg Goldstein of Bergenfield, garbed in one of the neon pink aprons that had been distributed to participants, was beaming from ear to ear. “This is amazing!” she exclaimed as she enveloped me in a hug. “It’s like a Jewishy reunion!” She had brought her husband, who was slightly embarrassed about being the only man there, and her two 20-something daughters, Shira and Sarah. Sitting at their table was a woman who described herself as a Reform Jew, who had never baked challah before, and a woman from Kiev who drove up from Roselle because there was no Challah Bake near her home. They all made fast friends.

The tragic situation in Israel added a deeper poignancy to our activity. Everyone stood for the Star Spangled Banner and Hatikvah. We recited Psalm 128 together and we prayed for peace.

After an explanation of the significance of challah, there was a challah-making demonstration.

And finally, we all got down to the business of cooking up the dough. 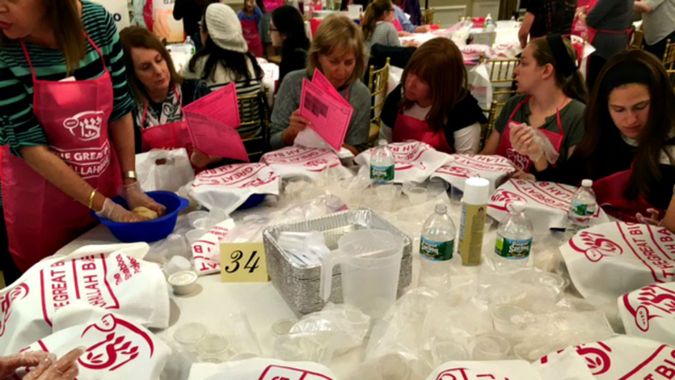 We poured our yeast and sugar into the mixing bowl and watched the mixture bubble up after we added warm water. The woman next to me, an expert challah baker, informed me that each ingredient has symbolism: Flour is the staple of life, she said. Just as making the flour is a long process, we need to overcome the struggles of life. Yeast, she said, makes the challah rise, so we should be able to build up the people around us. Sugar provides sweetness just as the sweetness should be abundant in our relationships. Salt is the smallest ingredient and therefore our criticism should be measured carefully. Oil was used to anoint prophets who gave us direction in life, and so we should have the proper guidance to understand our life’s purpose. Water symbolizes Torah, so our homes should be filled with wisdom.

And then, 2,800 hands dug into bowls and kneaded dough. It was quite the workout.

We chatted and laughed at our tables as we folded, turned and punched into our bowls. After a while, the dough became smooth. It was time to cover it and let it rise.

Suddenly, Israeli music blared over the loud speakers and two simcha dance teachers urged everyone to their feet. 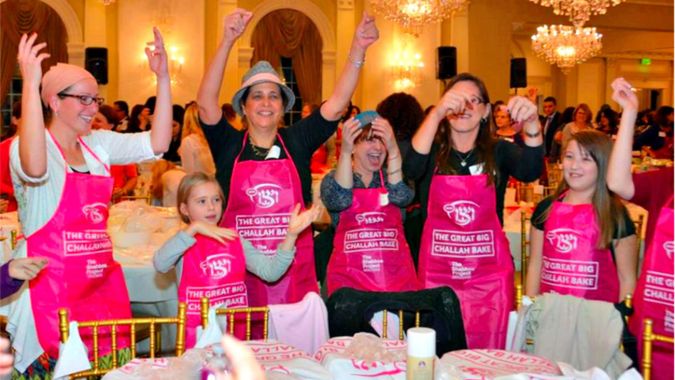 Dancing as the dough rises.

Rachel Garb of Teaneck didn’t have to think twice. She grabbed her daughters — Siggy and Kayla — and they linked arms with the other women in a chain that gracefully weaved around the tables of the large room, in sync with the music. “That was a highlight of the night,” she said, shocked that her teenaged daughter was enthusiastic about the dancing. “People were singing — a lot of them were really into it. There was a beautiful sense of camaraderie. We stayed until the very end.”

As for me, I took home the dough and after it rose, divided into balls to form a three-stranded braid that looked pretty good. As a heavenly fragrance filled the house, my children strolled into the kitchen, curious.

“Mom, are you baking challah?” My 11-year-old son asked, the excitement palpable in his voice.

Later, as we sat around the Friday night dinner table, we blessed the challah and tasted the fruit of my labors.

At that moment, I imagined the thousands of other women around the world who had also baked challah that week and whose families were also partaking of the delicious homemade challah, some for the very first time in their lives. I wondered whether it would have a domino affect and hoped it would bring more warmth and tradition into their homes.

“This is pretty good,” said my son, as he quickly grabbed another piece for his plate. “You should make this again.”