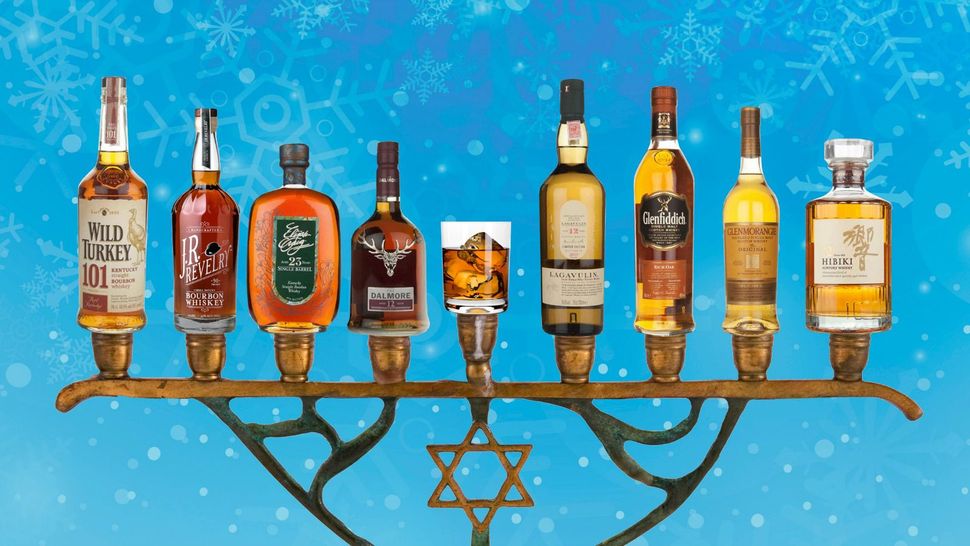 Enough with the oil. Cut the grease of the festival of “lets-celebrate-religious zealotry-by-inducing-heart-disease.” Its time to talk about eight nights of truly miraculous golden liquids — ones that are indeed flammable, but ones that would only confirm your insanity were you to put a match to them. Give the kids their toys and retire to a comfortable chair to sit with friends and family and sip one of these nectars, which will, miraculously, transform neurotic in-laws into charming raconteurs and bigoted relatives into kindly old uncles.

On the first night, it’s important to think of the East, where the story of the Maccabees took place. But the Middle East is too depressing at the moment, plus the whisky is not yet excellent, so don’t stop there. Rather head all the way to Japan and pick up a (about $70 for a regular-size bottle although it’s often sold in a smaller format). It’s delicious with a soft, fruity roundness because some of the whisky has been matured in casks used to make Umeshu, a plum liqueur.

On the second night come back to America. Have a wee dram or two of Wild Turkey 101 (about $40 and 101 refers to the proof!) and you will be improvising second verses to “Oh say can you see/ By the Hanukkiah’s early light” in no time at all. This is the quintessential Kentucky vanilla, the toffee tipple from the heartland of American bourbon. I’m a recent convert and this old school, all-organic, no-GMO recipe is a lovely smooth snort, ideal for a Monday night.

By the third night it’s time to retreat to the Highlands. For this holiday I’m being a little conservative (I promise to cut loose next year with some CRAZY recommendations once Bernie Sanders is president and King of America), so this is another safe bet that your wallet will appreciate. The Glenfiddich 14, Rich Oak (at about $40), will remind you of your fling last night with Wild Turkey, but will also take you back to the dried fruit and nutmeg of the holiday. If you had sour cream on your latkes tonight, this is the ideal follow up.

Fourth night, has to be some sort of climax to celebrate the halfway point not only of the festival but also of the week. And, given that we’re celebrating religious freedom in the land of the free, it would be apt to choose an American whiskey that pays special homage to a Hebrew prophet. Perhaps better known for his appearance at Passover, it’s Daniel Craig’s cousin, the Prophet Elijah Craig’s whiskey. Stores sell it as Elijah Craig 23 Year Old Single Barrel, from the Shapiras at Heaven Hill (for about $200). As I understand it, there are different barrels available, but the spicy one that I tasted was cinnamony and sweet. It’s a very dark and nuanced bourbon: proof of principle that American whiskey can be as complex a drink as Scotch.

At this point, depending on how the holiday is going, you may be drinking alone or you may have drawn a crowd. So I’ll tell you about the shammas, the candle in the middle that lights the other candles but doesn’t count towards the daily candles. In this case it’s the Macallan Lalique 62 Year Old Highland Single Malt Scotch. To be honest I’ve no idea what this tastes like. I have never had this happen to me, but if you can get someone to buy you a $25,000 bottle of scotch, your Hanukkah is made.

For the fifth night, I found a Peruvian whiskey. Well, not really. I found a whiskey that a Peruvian made very tasty. J.R. Revelry (at about $35) comes from Indiana’s MGP distillery that, as Seagram’s LDI, made some of the finest American whiskies of the last century. But Rick Tapia has released it while the spirit is very young and consumer palates are divided. I drank it on Halloween and it was delicious. I’ve chosen this for Thursday night because it’s the last true school night of Hanukkah (i.e. with work both before and after), which makes it an evening that needs blasting through. So this Revelry has a slightly burnt wood flavor that develops through into a nice leathery fruit ambience on the palate. Don’t wait to sit down, or to light the candles, there’s no blessing necessary. Arrive, pour, drink.

For shabbes (that’s the sixth night this year) I’m torn. I really want Glenmorangie’s private edition for 2016 to have already come out. I sampled what they wouldn’t confirm was a preliminary bottling of it at WhiskyFest and it was outstanding. But the Glenmorangie 10 Year Old original will do quite nicely as a reasonably priced (about $40) stopgap. Probably you’ll have guests around so you’ll need a couple of bottles of this creamy, light single malt scotch with lemon and apple notes just to keep people occupied while your husband finishes the cleaning up.

For the penultimate (seventh) night, just to follow Havdalah — or to precede it, if you have a long night planned — I chose the Dalmore 12 year old (about $50). I hate the stag on the bottle, it’s redolent of a cheesy 1970s machismo, but you can’t argue with the slightly nutty coffee overtones of this thick rich scotch. Buying the Dalmore is like having to endure the style statement of leopard print lycra so that you get to snuggle into the impossibly soft brown faux leather armchair while a beloved relative makes sugar toast. You shouldn’t have to, but it’s worth it.

We’re all over 21 so we aren’t getting exciting presents but please sound the fanfare for a lovely final night whisky anyway: a Lagavulin 12 (about $100), doesn’t really matter which year — whatever you can get hold of. As drunk, famously, by Nick Offerman (Offerman was supping the Lagavulin 16 which is, actually and paradoxically, slightly less yummy but fine if the 12 is sold out). If you like peaty, this is peaty but with rounded and warm citrus notes. This is the holiday of fire, and here’s the smoke, though not in an obnoxious way.

OK, I’m getting yelled at by my editor, who isn’t particularly into peaty whisky, and points out that we could do better for a climax to the holiday. So the best whisky I tasted this year — “life-changing,” I think I kind of called it (I quoted someone else talking about something else in the context of this whisky) — was a Glenfarclas Family Cask from 1972. Their single malts from that era are notoriously wonderful. Neighbors were swooning over a 1974 one too. It’s difficult to recommend a specific one because they all vary a little in flavor, price and availability, but if you aren’t a fan of peaty whisky, spin the wheel and get a Glenfarclas for somewhere in the region of $500. You’ll only regret it if you share it with the wrong people.

And on that note, Happy Hanukkah, I’m off to the liquor store.

Dan Friedman is the whisky correspondent (and managing editor) at the Forward. He is not a rabbi, there may indeed be a blessing necessary for the fifth night.