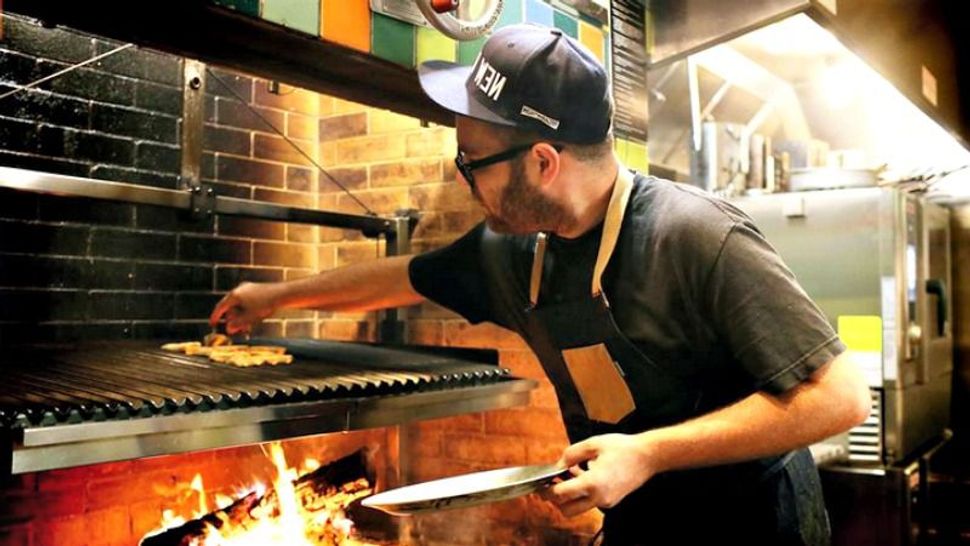 Chef Ilan Hall at the grill of what was formerly The Gorbals and is now Esh.

If you never got the chance to try Chef Ilan Hall’s brilliant mashups at , you may have missed your chance. The Brooklyn restaurant ceased to exist this month.

The good news is that Hall’s not going anywhere. The Gorbals has been rechristened Esh — that’s Hebrew for “fire” — and its border-hopping menu narrowed to Israeli-Middle Eastern barbecue.

“I’ve always wanted to instill more Middle Eastern and Israeli flavors into my food,” Hall told the Forward. “When we opened The Gorbals L.A. in 2009, it was divided between Israel and Scotland. But the Israeli things were always closer to my heart.”

After he moved to Brooklyn to open an East Coast Gorbals in 2014, the longing lingered. “We adapted the menu to New York, added more vegetables, and installed a beautiful Grillworks wood-fired oven. But we weren’t using it enough. It was calling to me.”

Esh came of Hall’s desire to make “pure food,” he said. “It’s easy to go off the deep end and make strange things. I’ve subscribed to that for much of my career. But the fact is that people are going out more, they’re more aware of how their food’s prepared, and they want a clear idea of what that food its. I prefer eating that way in my life anyway.”

On the plate, that translates as gently personal spins on age-old classics. For a kufta kebob, Hall uses turkey instead of beef or lamb for meatballs; they get spiced, steamed, then grilled. Served with tahini and pine nuts, “it’s not traditional,” he said, “but the flavor is.”

Though New York is definitely having an Israeli-food moment — with chefs such as Einat Admony leading the charge — Hall said he didn’t do a lot of intel before opening Esh. “I’m taking the nods from what I like best,” he said. “I’ve been traveling to Israel since I was a child, and I still go pretty often. I have a pretty good grasp of how these things taste and what I like about them.

His love for the region’s cooking comes through in a lamb shoulder that’s cold-smoked for two hours, slow-cooked overnight in a low-pressure steam oven, then served on grilled pita with pickled veg, Israeli salad, and zug made with jalapeños, cilantro and parsley. “It’s reminiscent of shwarma, but spiced differently,” he said.

And The Gorbals? “It may come back at some point,” said Hall, son of a Scottish-Jewish father and Israeli mother. “Let’s say maybe.”