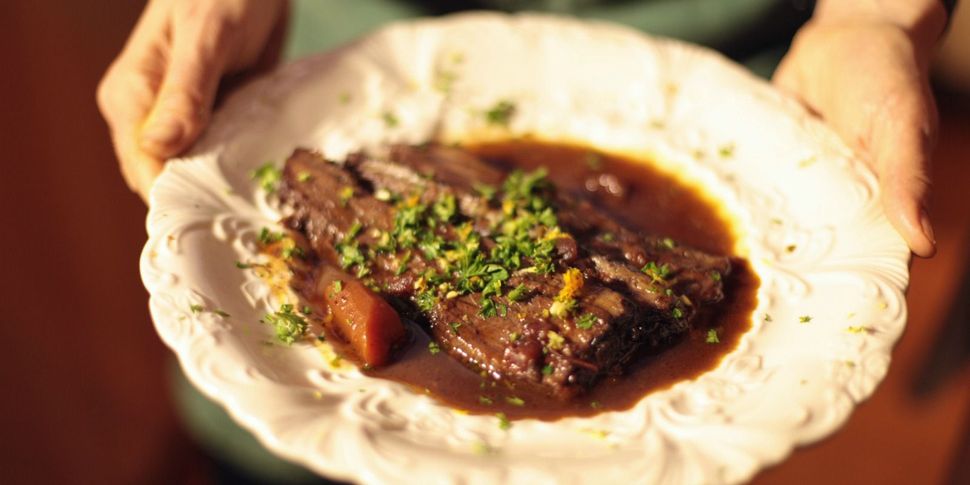 This is the brisket featured in our video, ‘How to Make the Best Boozy Brisket.’ (You’ll find the recipe there too.)

When I neglected to make a brisket for Rosh Hashanah, my son Teddy wouldn’t let me forget it. This was a major Jewish holiday, and to him, that meant brisket.

I promised I’d make one soon, and finally did, a few weeks later, using most of it for the divine mini-brisket hors d’oeuvres that Stephanie Pierson wrote about in Brisket’s Mini Modern Side. The rest was sliced and served to Teddy with a side of mashed potatoes.

We don’t eat the standard meat-and-potatoes meals very often these days, but there’s something about an important holiday that calls for a classic dish.

For Hanukkah, I thought I’d dust off the video I made a while back, when I demonstrated how to whip up a delicious and easy wine-braised brisket.

And when Pierson was working on the mini-brisket story, she sent me a link to a fun video about her book, “The Brisket Book: A Love Story With Recipes,” made by documentary filmmaker Roger Sherman, whose made the documentary, In Search of Israeli Cuisine,. The brisket video features food luminaries including Joan Nathan and Nach Waxman, among many others, making their famous briskets and dispensing meaty pieces of cooking wisdom.

Teddy, watch and learn. Next year, maybe you can make the brisket.