No Bull! Jon Stewart Gets Runaway Bovine Spared From Slaughterhouse 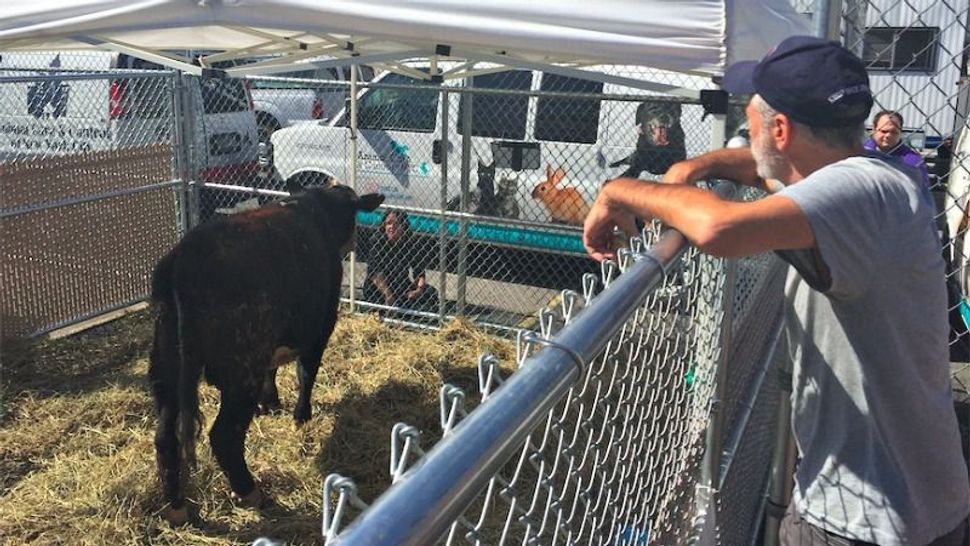 Image by Courtesy of Farm Sanctuary

Comedian Jon Stewart (right) in quiet conversation with Frank the bull after a dramatic rescue April 1.

April Fools Day was eventful for comedian and former Daily Show host Jon Stewart this year — and not because of a prank.

It was entirely serious when a bull en route to a Brooklyn slaughterhouse escaped in Jamaica, Queens, Friday and ran through the CUNY York campus where he was shot by police with a stun gun before being taken to . There, Jon and Tracey Stewart got involved on behalf of an organization called Farm Sanctuary.

Tracey Stewart is on the board of directors of Farm Sanctuary. According to her bio, “She lives in New Jersey with her husband, Jon Stewart; two kids; four dogs; four pigs; one hamster; three rabbits; two guinea pigs; one parrot; and two fish — all rescues except for the kids.”

The Stewarts quickly arranged for the bull, a Black Baldy Angus/Hereford cross known as Frank, to be transferred to Cornell University Equine and Farm Animal Hospital, where he was being checked out before the journey to his new “forever home” at Farm Sanctuary’s Watkins Glen, New York, location.

“We are so grateful to have in Tracey and Jon Stewart partners in our mission putting compassion first for farm animals,” said Farm Sanctuary’s Facebook page. “They stepped forward [and] transported for us a runaway bull from Animal Care Centers of NYC (ACC), and helped us raise awareness in a big way for the plight of millions of other cattle for whom Frank serves as an ambassador.”

Tracey Stewart is currently working to develop the New Jersey location for Farm Sanctuary. There are also locations in Orland, California, and Los Angeles.

No Bull! Jon Stewart Gets Runaway Bovine Spared From Slaughterhouse