Teen Brothers On a Roll With Kosher Startup 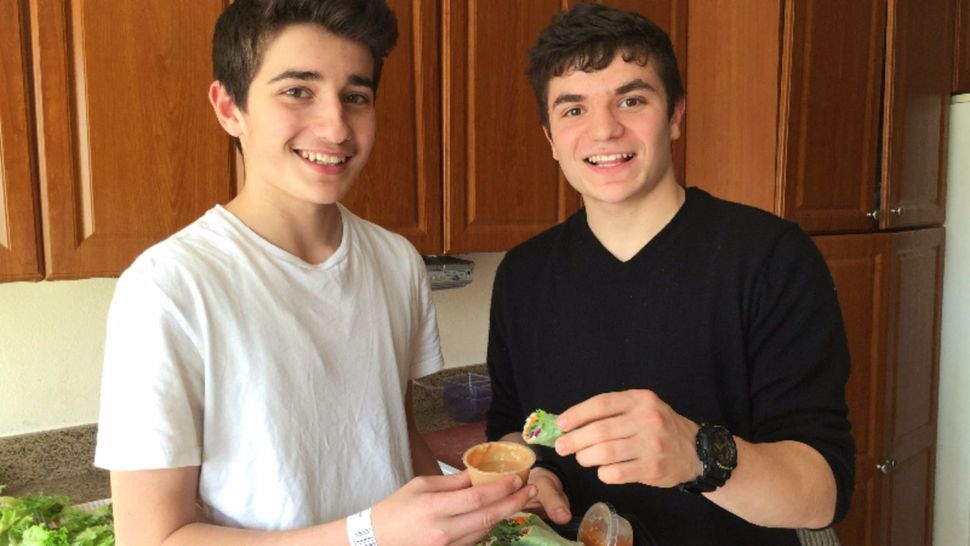 As the interview drew to a close, the founder of the Bay Area’s latest kosher food startup checked notes on his cellphone to make sure he’d covered everything he wanted to discuss. At one point, he paused to take a call. A delivery of rice paper was late, stalling his operation.

For a business owner, Gabriel Shpitalnik’s behavior isn’t out of the ordinary — until you learn that one of the things keeping him so busy these days is his Advanced Placement classes. Meanwhile, his parents make the deliveries because he doesn’t yet have his driver’s license, just a learner’s permit.

The founder of this kosher food business is only 16. A high school junior at San Francisco’s Lisa Kampner Hebrew Academy, he has lofty goals to get his product, Angel Rolls, into Whole Foods and Mollie Stone’s Markets. Eventually, the budding entrepreneur wants to open a Bay Area chain of quick and healthy kosher restaurants.

Kosher wasn’t always on his plate. The son of two Russian immigrants, Shpitalnik grew up in Pacifica. His parents knew very little about Judaism when they arrived, and the decision to send their children to Hebrew Academy was not taken lightly. But as Gabriel and brother Raphael, 14, started learning about Judaism and bringing it into their home, their parents slowly became interested in it, too. Not coincidentally, the names of the three Shpitalnik brothers — the youngest is Michael, nearly 6 — are those of angels who are God’s messengers; hence the name of the business.

While at first celebrating Shabbat dinner at home meant saying the blessings, eating dinner and going out to a movie afterward, the family slowly started attending services at Chabad’s Richmond Torah Center, sleeping over in a spare bedroom. As the Shpitalniks’ observance level grew, they started keeping kosher and moved to San Francisco to be within walking distance of the Chabad house. Then they were faced with the conundrum of most newly observant Jews: The foods they had previously loved and eaten without a second thought were now forbidden.

“My brother [Raphael] and I like to cook, so we had to do something about it,” said Shpitalnik. Furthermore, both brothers are athletic, which spurred their interest in nutrition. They had a special love for sushi, so they learned how to make it themselves.

“That’s what I became known for,” he said. Word traveled to Alex Shandrovsky, a Hebrew Academy graduate and founder of the kosher L’Chaim Sushi (now L’Chaim Foods).

“He offered me a summer internship to work with him, which gave me some really good insight and taught me about the business and the food world. After about six months, I realized I love business and I love food and I want to start some kind of food business,” Shpitalnik said.

About a year later, his father came to him with a request: Richmond Chabad Rabbi Ahron Hecht needed a kosher meal for his downtown lunch-and-learn. At the time, he thought of starting a business, but he wasn’t sure what his product would be.

The idea of fresh spring rolls came to Shpitalnik on Shabbat when he was walking home from synagogue — he calls it divine providence — but rather than just begin rolling, he signed up to take a class in entrepreneurship.

“Getting into a class at City College of San Francisco as a sophomore in high school was a really complicated process,” Shpitalnik said. But not one to be deterred, he rode it out and was accepted. “It was one of the most amazing classroom experiences I’ve ever had,” he said.

Rolled in thin sheets of rice paper, Angel Rolls are similar to Vietnamese summer rolls. The Shpitalniks produce several varieties. A protein-heavy version contains edamame and tofu. Some have sliced bell pepper and avocado. Some have mango and fresh herbs like basil or mint. All have thinly sliced raw vegetables like red cabbage, grated carrot and lettuce. 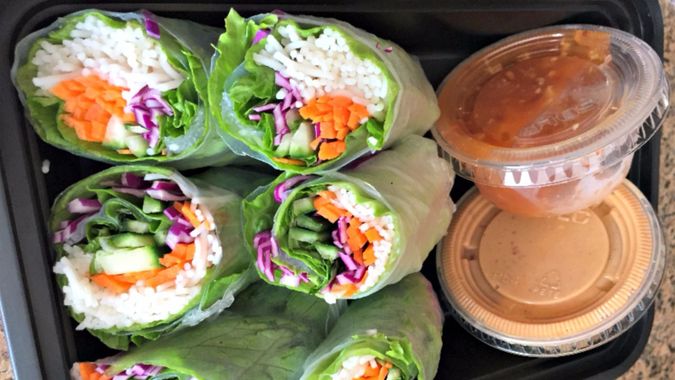 “All of our rolls are vegan, organic and non-GMO,” he said. The dipping sauces, which come in peanut, chili and ginger-lemongrass varieties, are not fully organic because kosher versions of organic ingredients used in the sauces are not easily found. Shpitalnik hopes to change that. “Our goal is to be 100 percent organic by 2017,” he said.

Because of kosher laws, the lettuce has to be meticulously checked for bugs, and the resident rabbi who serves as the company’s mashgiach (kosher overseer) uses a light box to make sure there are none. The company uses the kitchen at the Richmond Torah Center.

Shpitalnik has also hired a part-time chef who is responsible for the dipping sauce recipes. The chef helps out during school hours, so that by the time the brothers arrive after school, the noodles for the filling are cooked and the veggies prepped, waiting for the brothers to assemble them into rolls. They do this twice a week.

Angel Rolls gives 10 percent of all sales to the Richmond Torah Center’s Bikur Cholim campaign, which helps the elderly and less fortunate, “because we want all of our customers to fulfill the commandment of giving to charity whether they are conscious about it or not,” said Shpitalnik.

When he founded the business his sophomore year, he didn’t quite know what he was getting into junior year, when his workload and extracurricular activities would snowball.

The healthy aspect of Angel Rolls is deliberate, said Shpitalnik, who showed off a recent Snapchat in which he took a bite of a whole head of red cabbage, eating it like an apple.

“We don’t want people settling for chips that are on sale at Trader Joe’s just because they’re kosher or always eating challah,” he said. “It’s not healthy. We want teens to be aware about healthy lifestyles and that kosher food can be good for you.”

While Angel Rolls were at first pretty much limited to those lunch-and-learns, they have since branched out. The company has received catering orders from San Francisco’s Jewish Community High School and the National Conference of Synagogue Youth, where Shpitalnik serves on the regional board. Delivery is available anywhere within San Francisco, and orders can be placed on the website, AngelRolls.com.

During the interview, 14-year-old co-founder Raphael Shpitalnik was content to allow his older brother do all the talking, but when asked, he said: “He’s definitely more invested in this than I am, but I enjoy doing it with him. For me, it’s more of a hobby.”

Gabriel Shpitalnik emphasized he couldn’t have arrived where he is now without the support of his community, particularly NCSY, which allowed him “to find my voice and take action in the things I care about,” and Hebrew Academy.

“If I didn’t go there, this idea of a Jewish boy in high school deciding to open a kosher startup never would have come to me,” he said. “We’re taught there that if we put our minds to it, we can do whatever our hearts and minds desire. We owe so much to that school.”

Alix Wall is a personal chef in the East Bay and beyond. Her website is http://www.theorganicepicure.com. This article first appeared on J Weekly.

Teen Brothers On a Roll With Kosher Startup