Whisky Jewbilee, All Grown Up 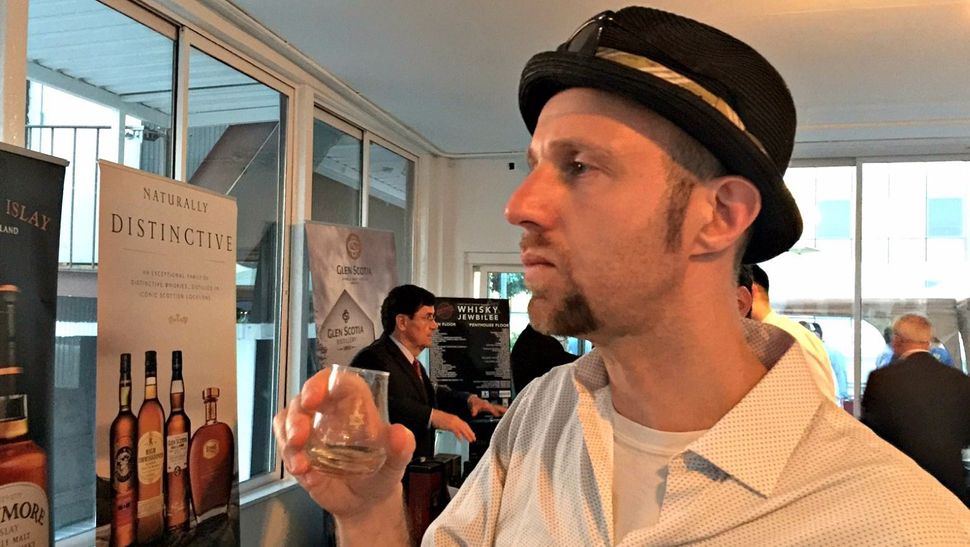 Other people’s kids: You see them born, you see them grow, you write reviews of them. That’s how I feel about the fifth-annual Whisky Jewbilee that took place on June 15.

I was there at its birth — the only national correspondent in attendance at the first Whisky Jewbilee in 2012 as it opened in the shul hall of the West Side Institutional Synagogue.

The event had come about because the massive, and highly attended, WhiskyFest decided to move from a Tuesday night to the longer Friday night and Saturday span of time. I’d talked to soon-to-be Jewbilee founder Joshua Hatton at the 2011 WhiskyFest as we sipped Scotch at the Marriot Marquis in New York, and so I was unsurprised when Hatton, along with colleagues Jason Johnstone-Yellin and Seth Klaskin, decided to provide an event available for the chosen people who would be excluded by the shabbes timing.

Originally in the same week as WhiskyFest in October, the Jewbilee moved to summer, as well as to Midtown. This avoided the back-to-Tuesday-night WhiskyFest and made it accessible to guests from the entire Tristate Area and beyond. Now in its third year at its far-West rooftop venue, Studio450, the Whisky Jewbilee is coming into its own and even has twin baby siblings — the one-year-old Chicago and Seattle Whisky Jewbilees.

Older whiskies aren’t necessarily better, but aging is a crucial process in the development of their character. And the same is true of whisky events.

New York’s Whisky Jewbilee is now quite grown up with a distinctive flavor: Studio450’s white walls, copious windows and glorious views of the Empire State Building and New Jersey; a slight early summer sweatiness; a men:women ratio higher even than WhiskyFest’s 70:30; two floors of tastings as well as some more booths outside. It’s small enough to be intimate and a little crowded; it’s large enough to have a few nooks affording surprises (of which more in a minute) and attendees can depend on dependable fixtures of excellent Scottish, Irish and American whiskies, delicious kosher food mostly from Grow & Behold as well as, if it’s your particular fondness, a terrace full of cigars.

And so to the whisky. 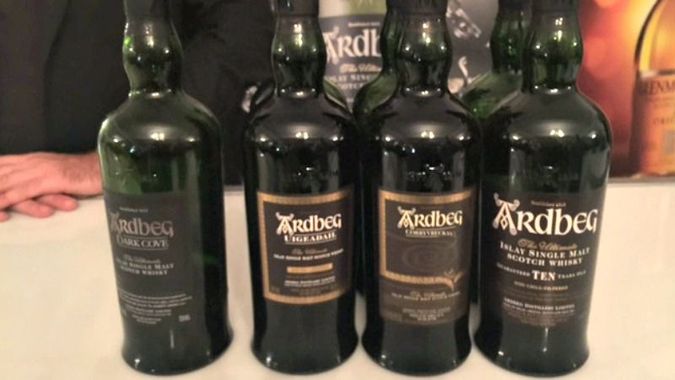 Ardbeg brought a selection of whiskies and the delicious spicy Correyvreckan (second from right)was the best of them all. Image by Liza Schoenfein

Ardbeg brought a whole selection to stand next to their Glenmorangie brothers. Dark Cove (matured in Oloroso sherry casks gets a little too dark treacly) and Uigeadail (pronounced Oo-ga-dal, also matured in sherry casks, but Jimenez sherry so it’s more vanilla) are tasty and more complex than Ardbeg’s 10-year-old, but they all lack the delicious spicy bite of the Correyvreckan that’s the best of them all. 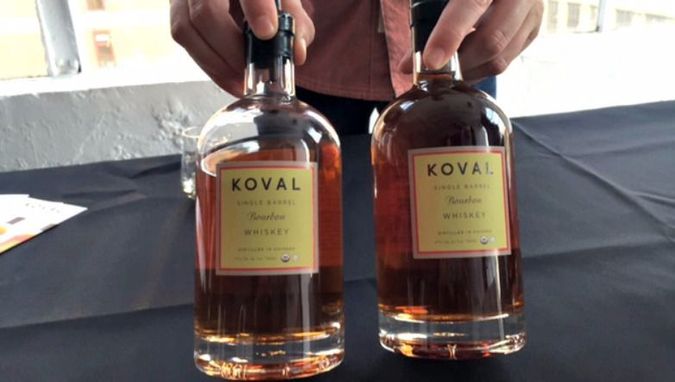 A range of offerings from Chicago’s Koval, established in 2008, is maturing nicely. Image by Liza Schoenfein

The range from Koval, the Chicago distillery established in 2008, is now maturing nicely. Their rye is no longer so raw, their oat has an intriguingly different, even floral, twist to it. We tried a Tomintoul 25 that was surprisingly rough and sharp, a Glengoyne 21 that was surprisingly sweet and smooth and a Japanese Nikka Coffey Malt that was unsurprisingly coffee-like. The Jewbilee festival bottling was a 9-year-old Wild Turkey 9-year-old which, priced at $101 in homage to the Wild Turkey brand, is pricey, but stands as a souvenir as well as an interestingly deep, kettle-corn version of the iconic bourbon. 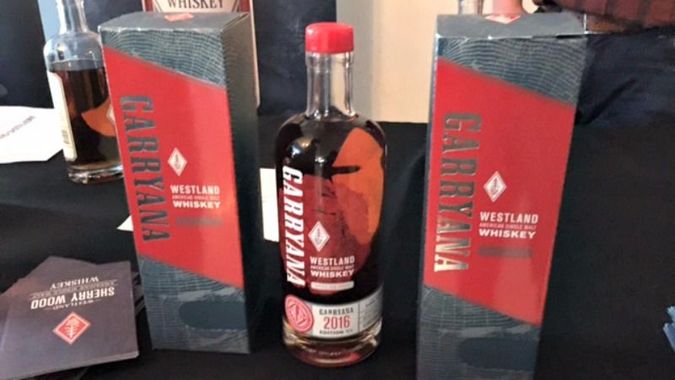 Garryana from Westland Whiskey is a spicy, rich single malt from the Seattle distillery. Image by Liza Schoenfein

The two surprises were, however, the Garryana from Westland, which is such a limited edition (and is not yet released) that I don’t even see it on their site. It’s a spicy, rich single malt from the Seattle distillery whose single malt so pleasantly waylaid me at Whisky Jewbilee last year. Named for the Oregon white oak that they use for the barrels, it has less of a coffee flavor than their plain single malt but has a similarly savory profile that is a welcome difference from the variations of pineapples and vanillas that many new and world whiskies seem to aim at. 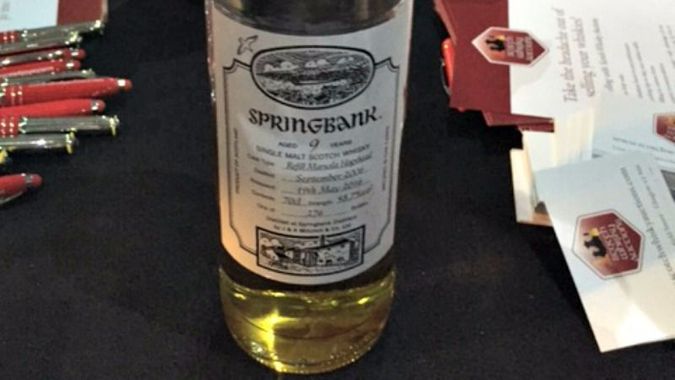 A Springbank festival bottling of a 9-year-old expression had a depth of flavor, with a non-trivial sweetness. Image by Dan Friedman

Perhaps I was craving strong, decisive flavors after the cholent because the other remarkable whisky I tried was outside at the Scotch Whisky Auctions tent. Chris, their Swedish Scottish attendant, suggested I try a Springbank. Now they produce a number of excellent and drinkable but mostly unremarkable whiskies, so I was loath to waste my time on it, but he prevailed and I tasted a Springbank unlike I have every tasted before. A festival bottling of a 9-year-old expression from a marsala hogshead had again a depth of flavor, with a non-trivial sweetness that was neither treacly like the Ardbegs nor vanilla like so many current whiskies. The hogshead is a small cask and marsala is a dark whisky so the spirit, put down in September 2006, had ample time and plenty of surface area to take on the flavor. But the Springbank spirit did something substantial, fruity and spicy with it that was well worth investigating. The bottle says it’s one of only 276, but I’d recommend finding one of the other 275!

There were no Israeli whiskies there this year, but I’m going to investigate those next and maybe they’ll be in New York, Chicago or Seattle for next year.

Dan Friedman is the managing editor and whiskey correspondent of the Forward.

Whisky Jewbilee, All Grown Up