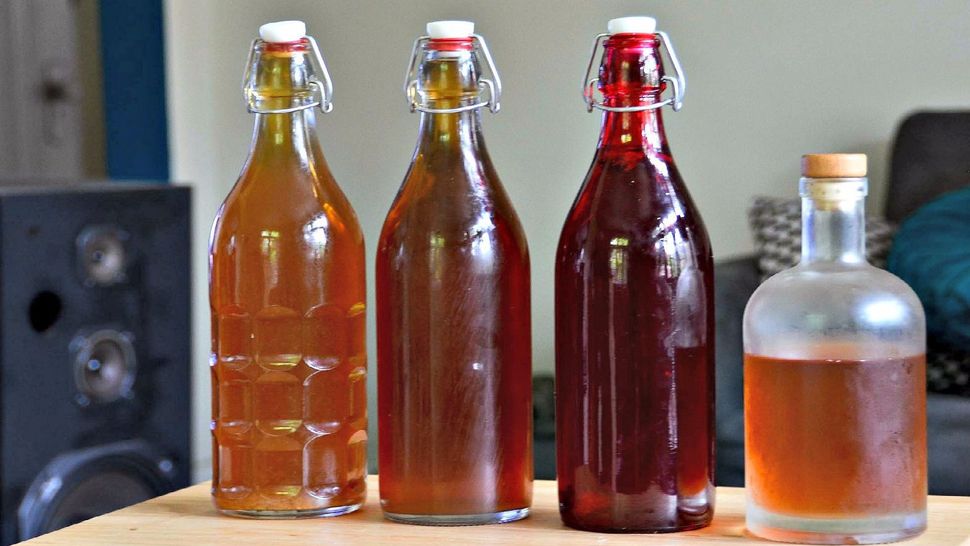 Becky O’Brien’s delicious homemade kombucha helped her connect to the everyday miracles around us.

It was faith that made me do it. Despite all my doubts and disbelief, I figured that if other people can make a little seed turn into food, then so can I! And lo and behold, I did it.

Well, not me exactly…

In one of my favorite Calvin & Hobbes strips, Calvin is lording over a couple of flowers with a menacing look on his face, declaring, “So you want some water, huh? Well, I’ve got a big can of it here. It’s up to me to decide if you get water or not! I control your fate! Your very lives are in my hands! Without me you’re as good as dead! Without me, you don’t…” Calvin’s rant is cut off by a downpour. The final frame shows almighty Calvin, his all-powerful watering can, and the flowers all getting equally drenched by Mother Nature.

Like Calvin, I’m used to being in control. Also like Calvin, I mistakenly believe that what happens in my life is because I’m making it happen. When I ventured into gardening several years ago, I was all too aware that all sorts of miracles and partners beyond my control would be necessary to succeed. I knew it wasn’t “me” that was going to turn those little flecks of seed into a vegetable. Microbes, worms, sunlight, ladybugs and the unfathomable miracle of the seed itself are just some of the factors I simply hoped would play along.

But play along they did! That first year, when my first seeds sprouted out of the little plot in my yard, I actually shouted in shock and joy, “They did it, they did it!” And they continued to “do it” — growing from seedlings into beets, sugar snap peas and other delights.

I witnessed another miraculous transformation this week when I tasted the fruits of a different sort of garden…a bacterial one. I’ve been wanting to try my hand at kombucha-making for more than two years, but I felt intimidated and lacked faith.

Once again, I knew it wasn’t something that I alone could make happen. It would take a slimy culture of infinitesimally small bacteria and yeast, or “SCOBY,” (the starter for kombucha) and the magic of fermentation to transform plain old tea into the elixir I was looking for. I could hope to create the right conditions, but then I would just have to sit back and pray.

It wasn’t until a neighbor recently offered me a SCOBY that I decided to take the leap of faith. Would it really work for me? If thousands of other people can do it, certainly I can too…right?

Well, shockingly, I — I mean “we”— can! Me, in cooperative partnership with billions of little creatures. After 10 days of fermenting, upon taking that first sip, I felt the same joy and shock as I did when my first seeds sprouted: “They did it! They did it!”

Once again, faith turned into belief.

Now, several years later, I continue to garden. I continue to feel what the great theologian Rabbi Abraham Joshua Heschel called “radical amazement,” looking at the world “in a way that takes nothing for granted.”

There’s still an element of faith in my gardening and much joy, but less shock. Through experience, I’ve developed confidence in my role as a good partner to the elements and creatures that make food-growing and fermenting possible. When those seeds come up, and the tea turns into kombucha, I do indeed feel deep gratitude and radical amazement, but I need less blind faith because now I believe.

With both gardening and kombucha-making under my belt, I hope to have an easier time diving into situations that require faith. Like the rain-soaked Calvin, from a perspective of humility my experience of radical amazement is that much richer.

Becky O’Brien is a gardener, amateur kombucha brewer and the Boulder Director for Hazon. Send your favorite kombucha flavors and tips to her at Becky@Hazon.org.