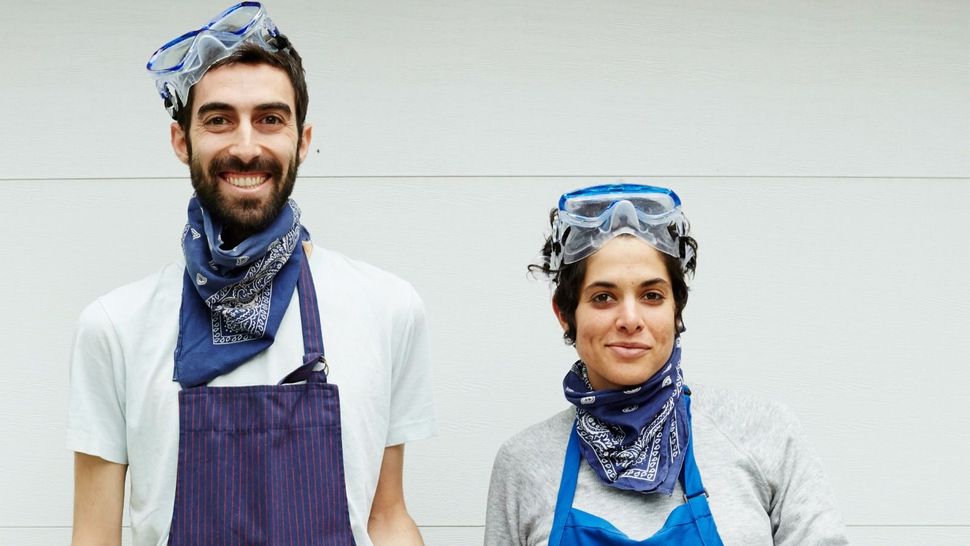 While we weren’t intentionally looking for one, a theme quickly emerged at our recent taste test of “The Gefilte Manifesto,” and that theme was: “I don’t usually like” blank, “but I like this.” It started in the very first moments of our gathering, when our friend Fred took his first sip of the Celery Collins cocktail and loved it — despite a decades-long distaste for gin — and ended with all of us practically swooning over the orange-spiced rye honey cake, despite most of us describing our sentiments about honey cake as “meh” at best.

For those who haven’t heard about them yet, Jeffrey Yoskowitz and Liz Alpern have an artisanal gefilte fish company in Brooklyn called “The Gefilteria.” While neither are chefs by training, both spent their post-college lives immersed in food: Yoskowitz became an expert pickler while doing the Adamah fellowship, and Alpern worked as assistant to eminent Jewish cookbook author Joan Nathan. Together, the two sought to inject new life into the typical Ashkenazi Jewish foods that might, at first glance, seem a bit stodgy.

I think it’s safe to say that their plan is working.

They are incredibly articulate — they speak and teach workshops on pickling and other topics around the country — not to mention photogenic. (Their author photo shows them looking particularly bad-ass, with their goggles and bandanas — the protective gear they use when making large batches of horseradish.) There’s something about two Brooklyn hipsters (sorry, guys) getting so excited about this food that’s absolutely infectious.

When Yoskowitz describes the first time he watched a 50-gallon drum of cucumbers turn into perfectly sour pickles, he simply says “my mind was blown,” and we can’t help but want to run out and pickle too. I also have to hand it to them for offering numerous suggestions for what to do with leftover pickle brine. For example: Use it in a martini or salad dressing.

Unfortunately, I didn’t have the several days needed to test pickle recipes. I look forward to trying them another time. But with the help of some of my guests, we did get to test many others. And as has happened numerous times with these tests, this was a very hard collection from which to choose, as so many dishes seemed worth trying. 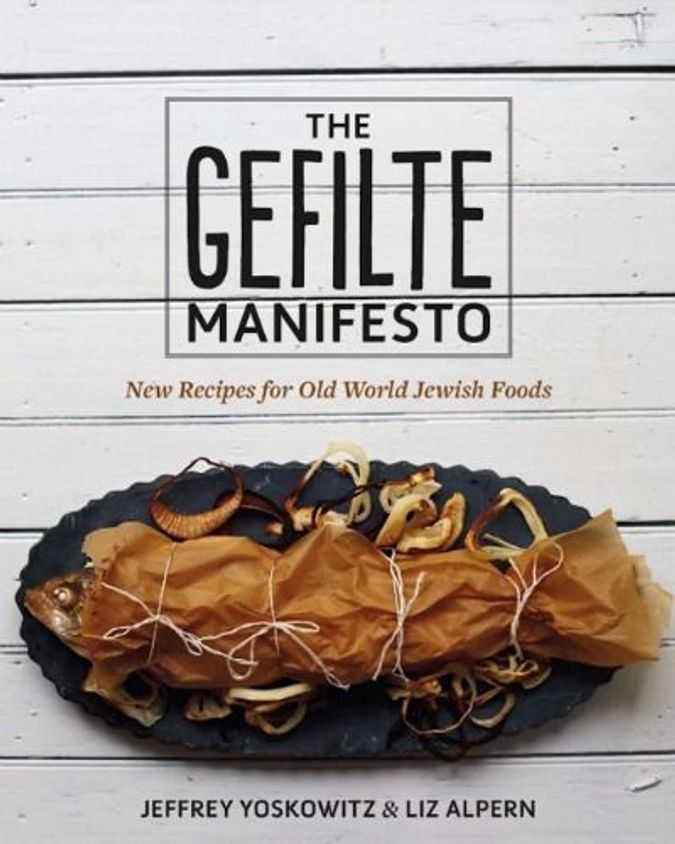 I’d like to give a special shout-out to the authors for including a cocktail section, which pretty much guarantees our taste tests a fun start. While our friend Fred wanted to rename the celery Collins an “altecuker,” the mix of cucumber, lime juice, seltzer and celery seed steeped in simple syrup was a great start, with “refreshing” being the most frequently used descriptor. Not only did it “look really pretty, but it also has an amazing aroma,” said our friend Chaim.

With the cocktail being the harbinger of things to come, we next sampled the spiced blueberry soup. While some guests thought it a bit odd to start with a fruit soup, I chose it because my grandma used to make it in summertime. In this recipe, a spice sachet is made with cloves, coriander, cinnamon and peppercorns, simmered with the fruit, honey and lemon, and later thickened with a few egg yolks and served with a dollop of sour cream and/or yogurt and lemon zest. There were mixed reactions to it, with both Chaim and I feeling that the aroma of the spices was stronger than the actual taste of it; we would have liked a bit more of the spice on our palates.

Already feeling guilty for not trying any of the pickles, I knew for the next course we had to try one of the four gefilte recipes, because when gefilte is in the book’s title, how could you not? I like gefilte fish just fine in a once-a-year-is-enough kind of way, but when I saw the smoked whitefish gefilte terrine with carrot-citrus horseradish relish, I knew that was the one to be tried.

Extra credit should be given, because this recipe is not only easy to make, but it yields a lot. It combines sautéed onions and scallions with flounder and smoked whitefish, eggs and a bit of matzo meal. The mixture is processed and then put into loaf pans and baked. The scallions give the finished dish lovely bright flecks of green. While not very traditional, this dish got raves, with even our fish-hating friend Nancy liking the one bite she tried. Our friend Emily said she is normally a gefilte-hater, but liked this — you see the theme carrying through. And then there were the rest of us, who all just pronounced it delicious, which suggests that one doesn’t have to wait until Passover to make it.

The relish recipe fooled me into thinking it would be significantly different from run-of-the-mill horseradish, but it wasn’t — even though it is bright orange and had citrusy notes as well.

For the main course (and because I had offers of help) we tried four dishes, three of which we absolutely loved. The only one we didn’t was a braised sauerkraut and potato gratin. Both my friend Daniella (who made it) and I were excited by a vegetarian main dish that would use sauerkraut, but in braising it first and adding potatoes and cheese, we felt the sauerkraut flavor got lost. We would try making it again with much more kraut; fewer potatoes.

The meat-eaters among us felt that the crispy chicken with tzimmes turned tzimmes — once again, a dish that not all of us loved — into something lovable. Because the recipe called for plenty of fresh ginger, red pepper flakes and lemon — and the savory chicken fat mixed together with the carrots and prunes and honey, it didn’t devolve into the overly cloying dish of my youth. It was both spicy and sweet, with Emily declaring it “some seriously good Shabbos chicken,” while the bite of prune gave me a fleeting thought of chicken Marbella. While some at the table said, “I love what the chicken flavor did to the zsimmes,” others said “I love what the tzimmes flavors did to the chicken.” It was a favorite all-around. We could all see making this for Rosh Hashanah.

Our friend Chaim took on the cauliflower and mushroom kugel, which, with its soufflé consistency and fried shallots on top, was another slam-dunk. Our resident vegetarian, Daniella, pronounced it satisfying enough to be a vegetarian main, and we all loved it for its overall umami-ness. Also, for a not-very-difficult recipe, it yielded impressively elegant results. Do not skip the optional fried shallots; the kugel is very smooth in texture, and having a crunchy element made it that much better.

Because we needed a fresh, crunchy vegetable, we chose the Autumn Kale Salad. It was an easy choice. Alpern begins the headnote for this recipe saying, “While kale was not, by any accounts, as widely eaten by Ashkenazi Jews as it is now by residents of Brooklyn…” We’ve all heard way too many times that Oakland is the Bay Area’s answer to Brooklyn, therefore we automatically felt a kinship with our kale-eating Brooklyn brethren.

What makes this kale salad unique is its roasted-garlic dressing (the recipe made quite a lot of it) With its rings of delicata squash, plus hazelnuts and raisins, we found nothing to fault here.

I’ve already spoiled the ending, by saying up top that we swooned over the rye and orange flavors in the honey cake. Honey cake can often be dry and one-note, and this one was anything but, with the rye flour giving the cake an unexpected funk (in a good way, of course). I will add that the authors put a cup of sugar in the recipe, and then write in the headnote that the sugar can be omitted entirely if one prefers less sweetness (and less sugar). Not having made it before, I decided to split the difference, and used half a cup of sugar, which we all felt struck the perfect balance.

If there’s anything to fault about this cookbook, I found the index more confusing than most, with some recipes having so many page numbers that it was hard to determine which had the actual recipe rather than just a mention of it. But that’s a minor gripe.

With this dinner taking place on the sixth of Elul — a month in which we are to spiritually prepare ourselves for the upcoming High Holy Days, Nancy said, “No one said anything about culinary preparation for the holidays, but that’s what this dinner felt like.”

Indeed, that’s exactly how it felt — like the dry run for a deliciously revitalized Rosh Hashanah meal.