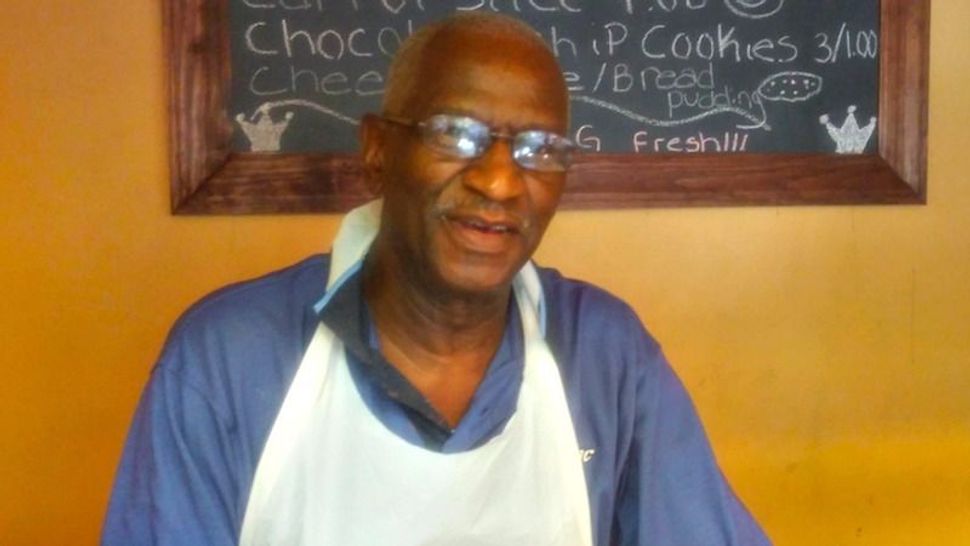 Alvin Lee Smalls, 75, has been selling rugelach in Harlem ever since he found and improved upon a recipe in a newspaper in 1964. Image by Ben Sales

But look around the small one-room shop, and you won’t see the usual Jewish kitsch or stylized Hebrew writing adorning the walls. Two certifications from the City of New York, and a picture of the Obamas, hang where the kosher certificate might be. On the opposite wall, instead of recommendations from local rabbis, frames enclose a letter from Rep. Charlie Rangel, the longtime local congressman retiring next year, and pictures of other dignitaries here in Harlem.

And instead of advertising an Ashkenazi name, the front window of Lee Lee’s Baked Goods on 118th St. in Manhattan displays a picture of Alvin Lee Smalls, the store’s African-American proprietor. Below Smalls’ photo is his slogan — “Rugelach by a brother.”

Smalls, 75, has turned his unlikely business into a Harlem institution. For half a century, he’s had two missions: to introduce rugelach to his Harlem neighbors, and to keep the craft of artisanal, handmade rugelach-baking alive. 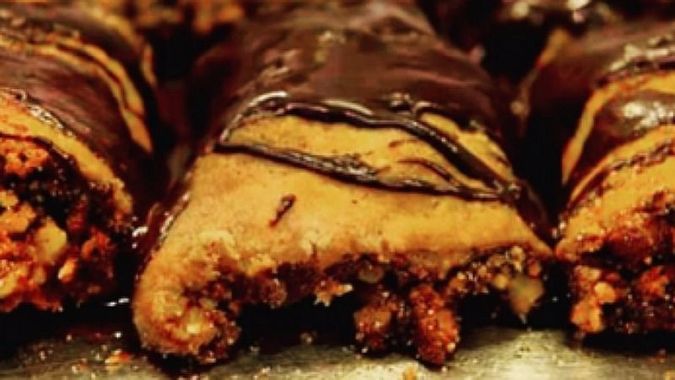 Smalls’ ‘rugelach by a brother’ come in apricot, raspberry and chocolate, pictured here. Image by Instagram

“It’s something I learned to bake, and people love it,” he said. “So they make me want to keep baking it.”

Smalls was working as a chef in a hospital in 1964 when he found a recipe for rugelach in the newspaper. He isn’t Jewish and hadn’t grown up with the pastry as a child in South Carolina, but decided to try it out. When he didn’t like the finished product, he started experimenting, altering the recipe for a few months. His new and improved formula yielded a crispier, sturdier, tastier version of the Jewish staple sometimes described as a mini Yiddishe croissant.

His secret is butter. In the long-standing debate between dairy and pareve — non-dairy — rugelach, Smalls comes down firmly, and moistly, on the side of dairy. Smalls shuns the standard vegetable oil for a rich, dairy dough. To keep the rugelach moist, he wraps the crust around raisins covered in honey.

Smalls’ apricot and raspberry rugelach come covered in cinnamon with walnuts inside, while the chocolate variety is imbued with almonds. A dozen of the small, dense rectangles costs $15, though newcomers to the bakery get their first taste for free. The store also sells pies, muffins and bread pudding and even rugelach ice cream.

Harlemites are so familiar with Smalls’ rugelach that when he had to shut the store down in 2010 because of a budget shortfall, local blogs sent enough customers over to allow him to reopen.

But Smalls jokes that just because the store’s African-American neighbors like his pastries doesn’t mean they know how to pronounce them.

“They call it all kinds of different names,” he said. “Jewish people, when they say it, have a little click in the back [of the throat].”

Smalls still makes his rugelach with his own hands, something he says is a dying art. This week, as he stepped out of the kitchen in a white plastic apron to meet me, he turned around every couple of minutes to shout instructions to his fellow bakers.

He laments that most of the rugelach bakeries he enjoyed in the 1960s and ’70s aren’t around anymore. But with Harlem’s Jewish population booming, he hopes to stay in business for a while longer.

“Most of them either retired or passed away,” he said of his rivals. “Today’s rugelach are now made in the factory, not like the old-time rugelach.”