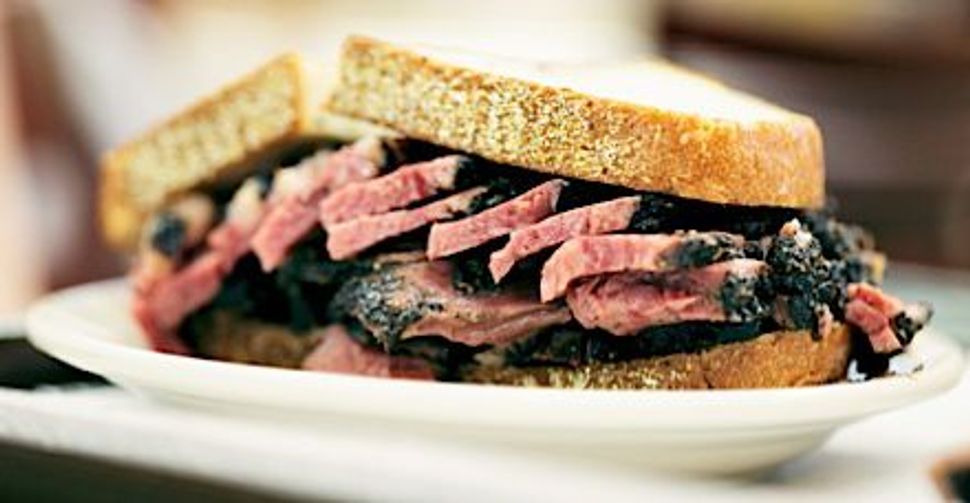 When Hillel used two pieces of matzo at Passover to form one of the first sandwiches in recorded history, he likely didn’t see it as the predecessor to the towering Jewish sandwiches of today.

Jewish sandwiches got their start in America around the turn of the 20th century. In 1887, Sussman Volk, who had immigrated to New York from Lithuania, reportedly received a recipe for pastrami in exchange for storing a suitcase for a friend. Around the same time, Katz’s Delicatessen opened in New York, serving its pastrami sandwich, which would become one of the essential sandwiches in America.

In the last 125 years, Jewish sandwiches have evolved. Drawing on tradition and inspiration from cultures around the world, the makers of modern-day Jewish sammies are digging deep for flavor.

But, what are the best Jewish sandwiches in America? We asked a panel of food critics and sandwich experts from across the country for their recommendations. Unsurprisingly, a large majority favor some variation on the classic, comforting deli sandwich. But take note: While many of the sandwiches come from kosher-style eateries, most are not kosher.

Here are their delicious picks, from East to West, with a few of our own mixed in.

Sour, salty and smoky flavors converge gracefully in the Brooklyn Transplant at Shelsky’s Smoked Fish in Brooklyn, which stacks kippered salmon with cream cheese, house-made apple horseradish and pickled herring salad between a choice of rye or pumpernickel bread. Cookbook author and food writer Joan Nathan raves about the sandwich, saying it has a “truly memorable” flavor combination. She opts for the chewy and light rye bread. 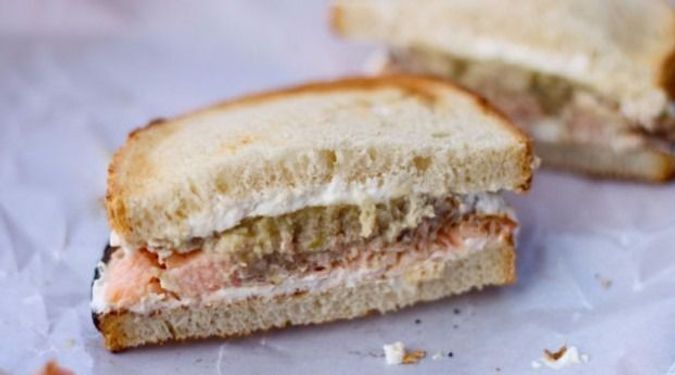 Smoked meat, a dry cured Canadian sibling of pastrami, is the raison d’être of 2-year-old Mile End Delicatessen in Brooklyn. Slathered with mustard and placed between slices of house-made dark rye, the smoked meat sandwich (and the restaurant) is a favorite of Jon Chonko, author of the book and blog “Scanwiches.” Cloves, fennel, peppercorns and coriander seeds lend their flavors to the meat, but what makes Mile End’s smoked meat over the top is that it’s smoked on wood — oak, to be exact. According to owner Noah Bernamoff, Montreal regulations forbid this practice, so not even the legendary Schwartz’s has that luxury. 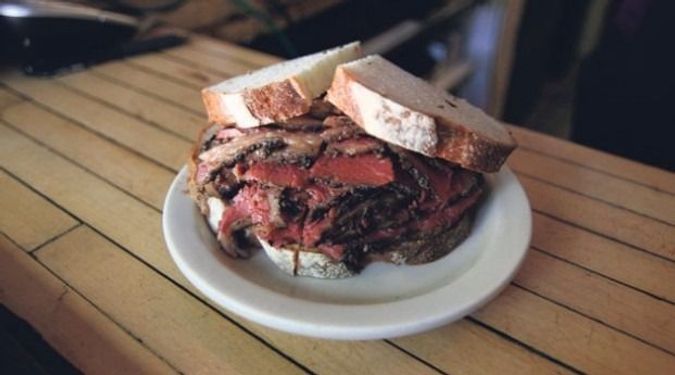 Katz’s pastrami has withstood the tests of time and tourists. Though Katz’s might not have made the very first pastrami sandwich in America, theirs remains a classic and definitely one of the best. The Manhattan staple’s pastrami on rye is a favorite of author and former Gourmet editor Ruth Reichl. “I’m a sucker for the pastrami sandwich at Katz’s,” she says. “I always give the counter guys a tip and ask for the least lean beef, and then I take it to my table and sit savoring the peppery garlic flavor of the tender meat, and the way it melts into the bread.” But Reichl explains that there’s more to Katz’s pastrami than taste and texture: “With each bite, I’m tasting history, and I love that, love being in that great raucous room and remembering that New Yorkers have been doing the same thing, in this same place, for more than a 100 years.” 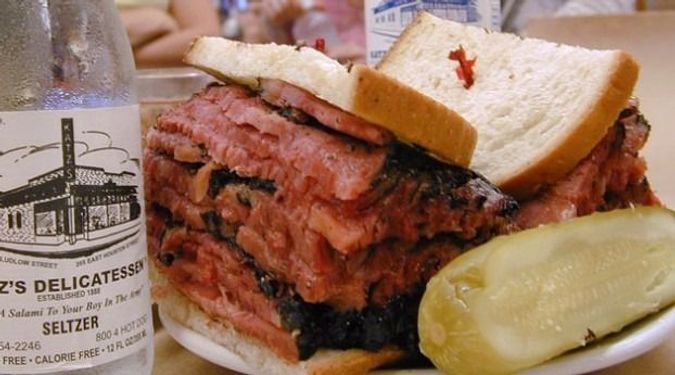 At Taim Falafel and Smoothie Bar in New York, the sabich is a favorite of Israeli food specialist Naama Shefi. According to Shefi, the combination of fried eggplant, hard-boiled egg, hummus and amba — an Iraqi condiment made from mangoes — was first invented by Iraqi Jews as a Shabbat breakfast sandwich (“sabich” means “morning”). Today it is one of the most popular street foods in Israel, and while sabich hasn’t achieved as large a following in America, Taim’s take is truly deliciously authentic. 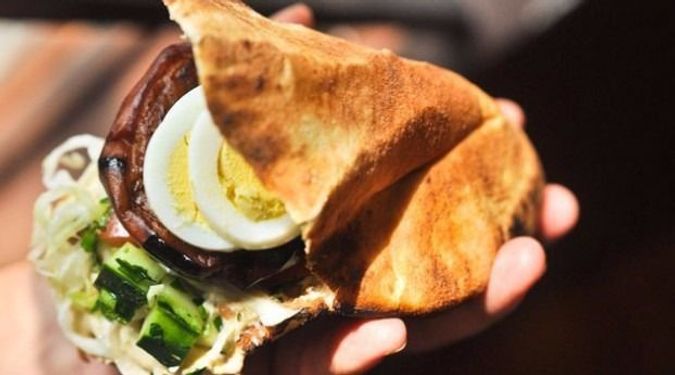 Sabich, an Israeli sandwich of hard-boiled egg, salads and grilled eggplant in a pita.

For the best bagel and nova, you’ll need to head to — brace yourself, New Yorkers — Philly! Former Forward food editor Devra Ferst swears by the thinly sliced rich nova and “epic-in-size” sandwiches stuffed with cream cheese, tomato and onions at the Famous 4th Street Deli. Dine amongst black-and-white autographed photos of patrons in a nostalgia-land that has been a Philadelphia institution since 1923. And if you’re up to the challenge, save room for the chocolate chip cookies for dessert. (But even if you don’t save room, they’re worth the bellyache, she promises.) 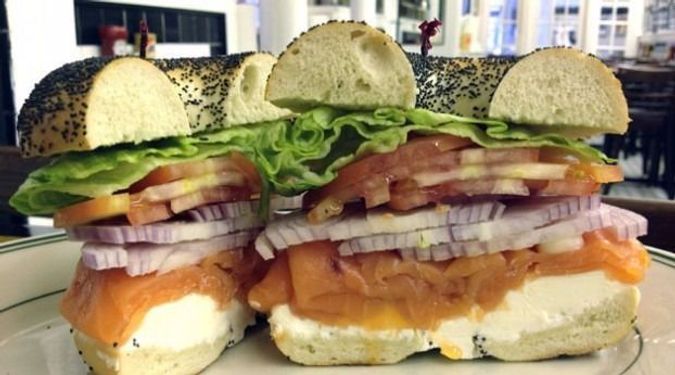 Chicago’s The Bagel Restaurant & Deli has one of the best corned beef sandwiches in town, says Eater Chicago editor Ari Bendersky. That’s no easy feat in a city famous for its beef. The venerable sandwich is stuffed with the highest quality beef from Chicago’s Vienna beef and is served on caraway-seed-heavy rye. Do yourself a favor and request that your corned beef be hand-sliced, and then pace yourself — this is one big sammie. 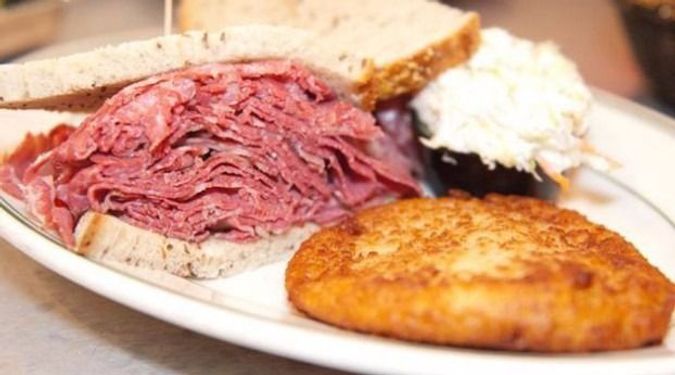 The Bagel Restaurant & Deli, Chicago (Courtesy of the Bagel)

Thin and crispy potato pancakes replace rye bread in the Latke Reuben at Zaidy’s Deli in Cherry Creek, Colo. Stuffed inside is the diner’s choice of corned beef or pastrami. Top it off with Zaidy’s house-made Russian dressing and Swiss cheese and you have yourself a delicious, albeit sloppy, fork-and-knife sandwich. You might say it’s the Jewish equivalent of the KFC Double Down (though it predated the Double Down by about 10 years). Yes, it’s kitschy, but as Denver Post restaurant critic William Porter said, “It’s worthy on the pure flavor merits.” 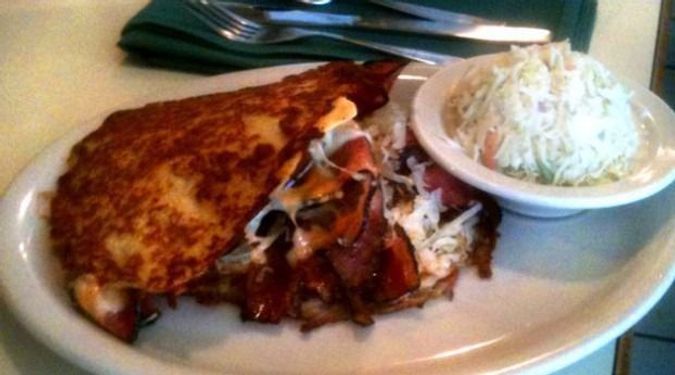 At Deli Board in San Francisco, a trifecta of meats make up the Gold-n-Berg-n-stein, named for — what else? — three of the most iconic Jewish last names. Corned beef, pastrami and kosher salami are served with Muenster cheese, house-made coleslaw and Thousand Island dressing on a French roll, which keeps all the components neatly together, according to owner Adam Mesnick. Patricia Unterman, food writer for the San Francisco Examiner, says this sandwich sets the bar high: “Soft, salty, buttery, piquant and creamy, this sandwich transcends its components to become a higher food, some kind of manna.” 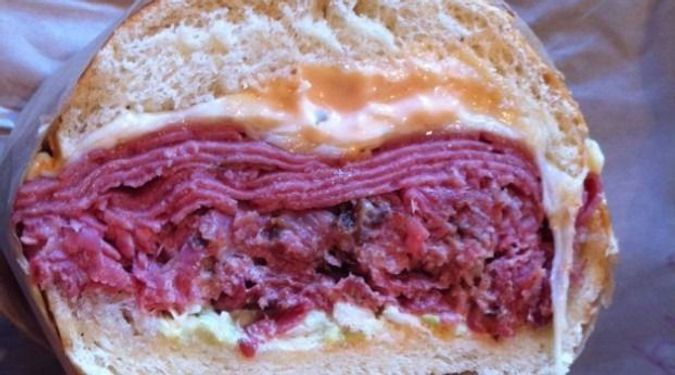 Langer’s Delicatessen-Restaurant in Los Angeles offers a pastrami that is steamed until it reaches a perfect state of tenderness and is then hand-cut — a rarity at delis today — ensuring scrumptious cut-against-the-grain slices. A timeless classic, it’s the “desert island” sandwich of “Save the Deli” book and blog author David Sax. “It’s not so much one thing as the combination of perfect elements: warm, crusty double-baked rye bread, cut thick [with] hand-sliced, tender steamed pastrami, piled evenly across the bread.” 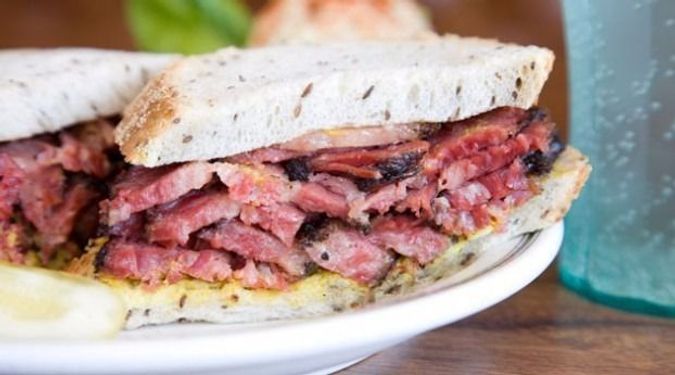 Molly Yeh is the author of “Molly on the Range: Recipes and Stories From an Unlikely Life on a Farm.”