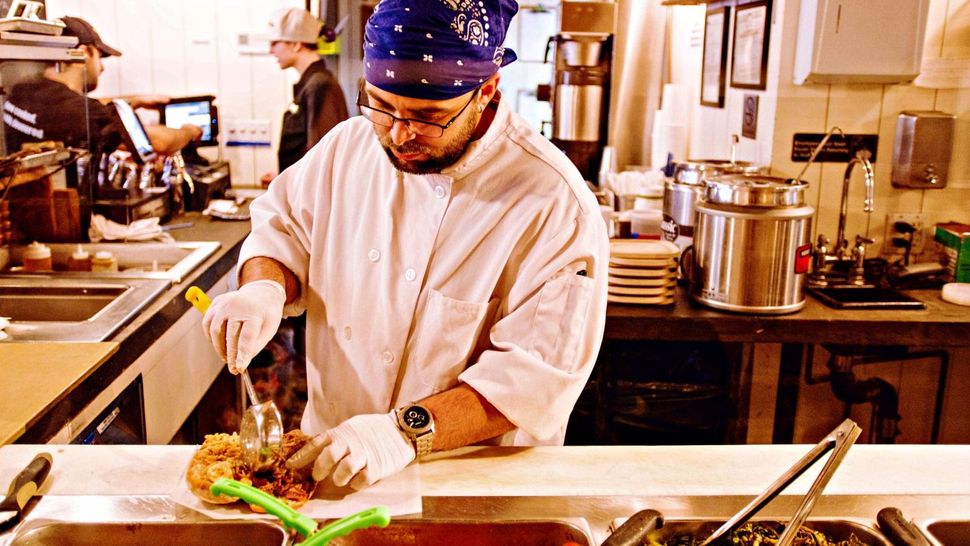 Andy Jacobi’s sandwiches practically have a halo. At Untamed Sandwiches, the bite-size shop he runs with Chef Ricky King, the former marketing exec stuffs his oversized creations with ethically sourced meat and vegetables that are local, organic and pesticide-free.

Brisket’s been a huge hit for the duo. As they cut the ribbon on a second location, in Dumbo, Brooklyn, the Forward caught up with Jacobi, who calls himself the restaurant’s “head sandwich artist” – and found out that haimish food memories helped shape his very hip new hangout.

Does your Jewish background flavor Untamed’s menu or philosophy?

Jews have been doing amazing things with brisket since time began, and braising is a really traditional way Jews prepare brisket. I remember as a kid watching my grandma making brisket for Rosh Hashanah dinner. She would cook a whole kosher brisket in an enormous stockpot for the entire day, braising the meat in a mix of beef stock, red wine and black peppercorns. To this day, when I hear the word brisket, the smell of walking into my grandmother’s kitchen is what I think of. But my favorite part of her brisket tradition was the next day, taking the leftover brisket that had sat in the fridge overnight, soaking up those juices and regaining a little bit of bite, and turning it into a sandwich!

What’s the process behind your own brisket at Untamed?

It’s a five-day process! First, we cure the brisket in salt and black pepper for 24 hours, allowing the meat to season all the way through. Then we sear the briskets for just a couple minutes on each side, creating that amazing maillard effect that caramelizes the edges of the meat and locks in the juices. Then we braise the briskets in port wine and our double brown chicken stock for 14 hours. Finally, we leave it to refrigerate and soak back in all those juices for two days before bringing it back up to temp to make into sandwiches.

Just like grandma’s brisket from the night before, brisket tastes better when it has had time to soak back in the juices and regain some texture for a couple of days.

You’ve talked about ‘intensive sandwich research’ behind Untamed. What was that like?

We were extremely meticulous in our research. It was really, really hard work! In all seriousness, the best meetings I have these days are over a sandwich and a beer. Sandwiches just make people happy. They are almost as good of a social lubricant as beer. And we happen to be very, very good at making sandwiches that make people happy. So the moral of the story is that everyone should really be having all of their business meetings at Untamed Sandwiches.