Pigging Out With Chef Leah Cohen 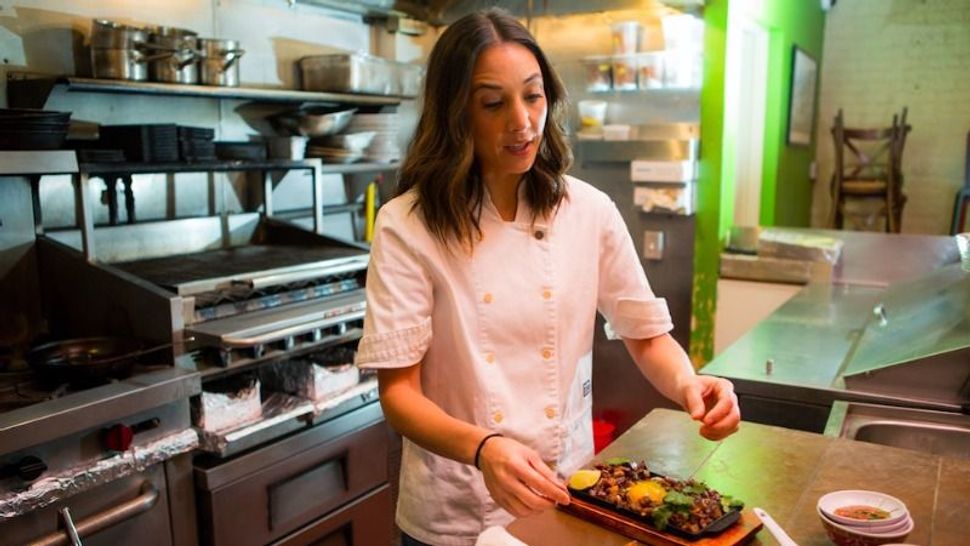 Chef Leah Cohen sounds so restless that it’s almost hard to believe she’s settled down to run a restaurant.

After years of toiling in A-list Manhattan kitchens like Eleven Madison Park and Centro Vinoteca — and taking a star turn on Bravo’s Top Chef — Cohen crisscrossed Asia for a year exploring food of her Asian heritage. The daughter of a Jewish father and Filipino mother, Cohen opened Southeast Asian hotspot Pig & Khao in 2013.

As she contemplates her next move — maybe a noodle bar, she says, or a Philly branch of Pig & Khao — Cohen had a quick chat with the Forward from her Lower East Side eatery.

Did you grow up around Jewish food?

My grandmother on my father’s side was a home economics teacher. We lived with her until I was about 5, when my parents bought their own house. We always celebrated Jewish holidays at her house. I was her little helper — her prep cook, you might say. We made matzo balls, brisket, haroset for Passover. Passover at her house was my first memory of preparing food.

For a lot of Jews, pork is so taboo that it becomes sexy. Is that how it ended up at the center of your menu?

Pork was a non-issue for us. We literally ate everything. And I still became obsessed with it.

What would you suggest for a home cook who wants to try replicating one of Pig & Khao’s dishes at home?

The most approachable dish on our menu for any home cook is adobo, which is probably the most famous dish from the Philippines. You can do a basic chicken adobo, which has only five only five ingredients: soy sauce, vinegar, garlic, black pepper and bay leaf. You can use whatever protein you want and serve it with the rice. The sauce is key, balancing those flavors. It’s a one-pot dish, very approachable, and not an intimidating flavor. I learned to make it when I was 12.

Pigging Out With Chef Leah Cohen