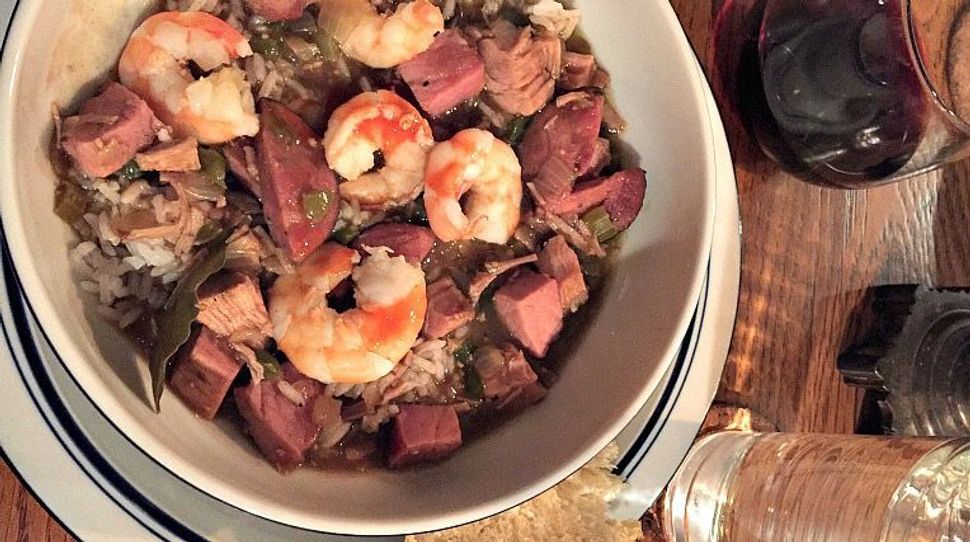 The author’s gumbo, served with a side of challah and kiddush wine. Image by Sofia Marie Unterman

I make the treyf groceries first. (In New Orleans, you “make” groceries; you don’t buy them.) Traffic inches along North Broad Street, everyone eager to start the weekend. The sun is a ripe satsuma hanging above the Mississippi, and the Superdome reflects the purple sky. I have several stops to make before I even start cooking, so I’ll be cheating Shabbat in more ways than one. But in a city where crawfish boils melt past midnight and I can’t remember the last time a meeting started on time, it’s more of a necessary adaptation than a broken rule.

It’s not lost on me that I throw, arguably, the least kosher Shabbat either side of the Mason-Dixon Line, but I’ve always thought of my Jewish identity as a means of adapting in non-Jewish spaces. To me, mine is not a less Jewish Shabbat because there is shellfish and bread-breaking long after sundown, but a just-as-meaningful one; it’s a time to take a break from an insane workweek, relax with loved ones over a well-earned meal, give thanks for those elements, and keep my favorite family tradition alive.

I grew up Reform in Kansas. We didn’t often go to Friday night services, and there weren’t many other Jews to invite over, but every Shabbat my mom made a challah or picked one up from the nearby bakery and cooked a delicious dinner. My dad had Friday evening meetings, so dinner was pushed back late. When my mom’s back was turned, while she pulled potatoes from the oven or checked a slab of salmon on the grill, my sister and I sneaked bites of challah until half the loaf was gone. Eventually we all sat down, recited the prayers and lit the candles. The leisurely, almost Southern pace only enhanced the Shabbat — it gave us more time to deflate, to relax and reflect.

It’s not lost on me that I throw, arguably, the least kosher Shabbat either side of the Mason-Dixon Line, but I’ve always thought of my Jewish identity as a means of adapting in non-Jewish spaces.

When my sister and I got to middle school, she began skipping the dinners for basketball games and parties, scarfing down a few bites of challah before leaving. Out of a combination of social ineptitude and aversion to change, I was reluctant to miss the dinners. When I moved to New Orleans for college, I developed a love of cooking, and when I came home for breaks, I tried out some of my newfound recipes on Shabbat — red beans and rice with Andouille, trout almondine and my very favorite, gumbo.

After college, I moved to New York for graduate school. I recruited my roommates into throwing dinner parties. We cooked up a storm in our miniscule kitchen, even though we set off the fire alarm every time we used the broiler, and used found chairs and tables to seat everyone. But it wasn’t until this summer, when I moved back to New Orleans, that I revived the Shabbat dinner tradition.

I work long weeks as a teacher, so the cooking starts late, the shopping done Friday on the way home. I make my first stop at Cochon Butcher, in the Warehouse District, to pick up an enormous link of Andouille sausage. Then I head up Tchoupitoulas Street to Rouses Louisiana Market for a pound and a half of head-on, fresh Gulf shrimp, trinity (green bell peppers, yellow onions and celery for the roux), a big bag of local Supreme rice, a couple heads of garlic and a handful of fresh okra.

I buy the challah last, to avoid eating it out of the bag, baguette style, as I shop for the other groceries. At Stein’s Deli in the Lower Garden District I pick up a giant loaf, glazed with egg whites and studded with raisins. (Because they sell the best challah in Orleans Parish, I call in my order during morning recess.) Car full of the heavenly smells of smoked sausage and freshly baked bread, I rush home as the sun begins to set. The outside tables along Magazine Street are crammed with revelers sipping cocktails and eating oysters by the half shell. On my block the pepper-sweet spices of a crawfish boil perfume the air.

The menu for Gumbo Shabbat varies, but the mainstays are my take on Paul Prudhomme’s Andouille-and-seafood gumbo, challah and salad. I switch up the salad depending on what is in season: Louisiana strawberries and pecans in the summer, satsumas and goat cheese in the winter, roasted sweet potatoes and beets in the fall. I make my dressing, a combination of olive oil, balsamic vinegar, lemon juice and a big spoonful of Creole mustard. The dessert is the only part of the menu I make ahead: a plate of home-baked macaroons and hamantaschen, my mom’s sweet potato pie, or my very favorite, challah-and-chocolate babka bread pudding with whipped cream and whiskey sauce. And of course, no Shabbat dinner is complete without wine — I pop a bottle and say a quick ha gafen before I even start chopping up the trinity.

The roux is a rich red brown, the shrimp peeled and gleaming in a colander in the sink, and the blues ripples on the radio. But it really begins to feel like Shabbat when my friends arrive, bearing wine and gnosh — hummus and pita chips, brie to smear on the challah, half-full bottles of Winn Dixie whiskey. Someone helps me set the table, another dresses the salad, and we all move to the living room to eat and drink until the gumbo is done. When we can’t resist the smell any longer, we sit down at the table for prayers, candle lighting, a toast and a few hours of stuffing ourselves with a steady succession of gumbo, salad, challah and then dessert.

What started as a way for me to try out some recipes has morphed into my favorite part of the week, when I get to take a step back from the craziness of work and take a reprieve before the bacchanal of a New Orleans weekend. It’s a city-wide tradition to celebrate with family and a big pot of gumbo on Friday night, and Shabbat fits seamlessly into this.

I’ve made my own family here, a collection of Jews and non-Jews who share my appreciation for the tradition. Sometimes as we chat over our seafood and sausage, one of them asks me what Shabbat means, or another question about Judaism, and those of us who know give our answers. For me, Judaism is not just about adapting to non-Jewish spaces but embracing the contradictions I come up against in those spaces.

My cooking definitely reflects this. In addition to my gumbo Shabbat dinners, I make sweet potato latkes for Mardi Gras brunch and Hanukkah, mop up a skillet of greens with cornbread with an occasional Shabbat roast chicken, and mix up Southern and Israeli flavors (za’atar grilled shrimp, feta and kalamata olives over Israeli couscous).

My very favorite treyf Shabbat concoction I reserve for Saturday morning. If dinner is a true success, you will wake up to stragglers on the sofas (or, if you’re lucky, one a little closer to you) — stragglers who deserve fresh-squeezed satsuma juice, coffee and my signature Shabbat breakfast: challah French toast with a side of bacon.

Sophia Marie Unterman is a writer and teacher living in New Orleans. She earned her M.F.A. at Columbia University and her bachelor’s degree at Tulane University.