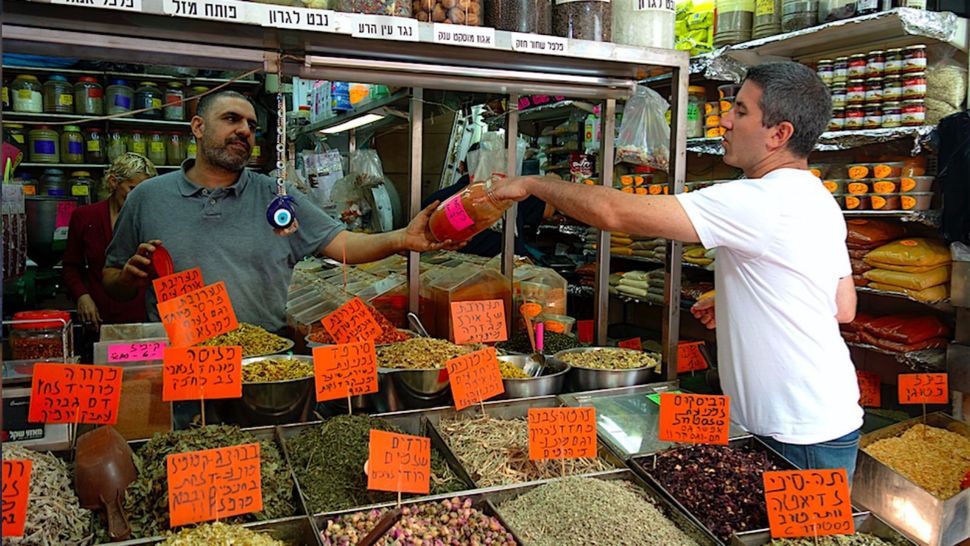 Is there such a thing as Israeli food?

The good news is that filmmaker Roger Sherman went looking and came up with a mouthwatering documentary, “In Search of Israeli Cuisine,” which opens in Manhattan at the Angelika Film Center and Lincoln Plaza Cinemas on March 24.

Perhaps less good news is that there doesn’t seem to be a definitive answer to the question of whether a genuine Israeli cuisine actually exists. It really depends on whom you ask. The film’s genesis was Sherman’s first visit to the Holy Land, where he discovered, as he put it, “a food culture that no one in the world knows about.”

Working behind the camera, Sherman tapped American-Israeli chef-restaurateur Michael Solomonov to be his on-screen guide.

Solomonov, who has several wildly successful Philadelphia restaurants including Zahav (Hebrew for gold) and Dizengoff, is the perfect choice. He knows the land, he knows the kitchen and he clearly takes great joy in showing off both. 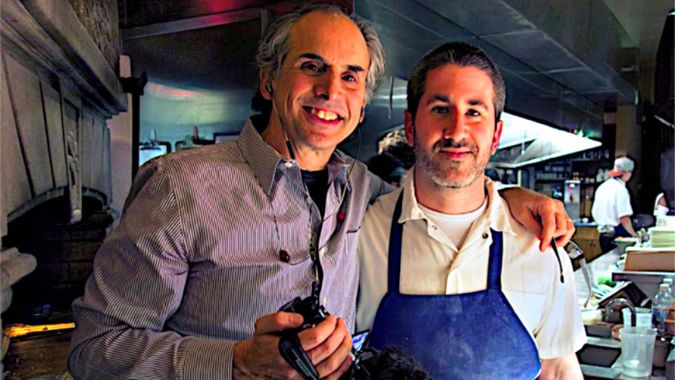 They literally traveled the length and breadth of the country, visiting a dozen restaurants, a vineyard, a farm and even an artisanal cheesemaker on their quest. Solomonov speaks to and samples the creations of star chefs in Israel’s culinary firmament — among them Meir Adoni, Ezra Kedem and Husam Abbas — and talks with Muslim and Christian Arabs, Druze and both secular and religious Jews. Sherman shot at over 100 locations: near borders with Syria, Lebanon and Egypt, in the Negev and near the Mediterranean and Sea of Galilee.

At each stop he and Solomonov sampled — and apparently loved — the local specialty, whether it was a shish kabob, a fresh salad or fish. Sherman did his homework and the appropriate diversity of his source material mirrored the diversity of the food.

If there is a consensus, it’s that Israeli food is an amalgam of the 100-plus cultures that make up the state: Ashkenazi, Sephardic and Arab, of course, but also others including Persian, Italian, French and Russian. Clearly, it is far more than Grandma’s falafel and brisket — ironic, since several of the chef’s interviewed cite their grandmothers as inspirations.

Chef and cookbook author Ruthie Rousso — her specialty is the Turkish food she learned to cook from (wait for it) her grandmother — suggest that Israel is too young a nation to have created a cuisine. But she considers that a plus. “Being such a young country, we are not tied to traditions. Chefs are freer to riff and experiment.”

While Israel is a small country — about the size of New Jersey — it is topographically diverse, so chefs have access to a variety of produce that grows in different climates. In terms of farming, it is extremely high-tech. (In fact, Israeli drip-watering methodology has been exported around the world.) For example, Solomonov visits a tomato farm in the Negev, where plants grow to 36 feet and actually produce fruit for two years (rather than one, as is typical of tomato plants). As a result, even near the desert, chefs have access to fresh fruits and vegetables.

So no matter where they are located, chefs rely heavily on local ingredients, whether produce or lamb.

One restaurateur goes fishing in the morning and serves her catch the same evening. Another gets everything he needs within 20 minutes of his restaurants. Rama ben Zvi used to go into the hills around her restaurant, Rama’s Kitchen, in Nataf, just outside Jerusalem, to gather acorns, mustard leaves and radishes — even cypress cones and needles, used to distill the dishes. (The restaurant burned to the ground late last year, a victim of the wild fires that hit the country.)

Not surprisingly, there are political overtones even to the country’s food. Some suggest that food is a vehicle for bringing people together. “Food is not political,” said Ezra Kedem. “It’s what’s grown on this land by the people living on it. If they are called Palestinian or Israeli, I don’t care. I think the tomato doesn’t care.”

On the other hand, Palestinian chef Abbas contends that Israelis have appropriated Arab dishes such as hummus and claimed them as their own.

What I was unaware of is that how much Ashkenazi food — my mother’s — had fallen out of favor during Israel’s early years. The young Sabras thought it anachronistic, a visage of the old, less confident Jews from Europe. That has changed, and contemporary chefs are increasingly incorporating elements of those recipes into their own.

Sherman and Solomonov cover all the bases. The tone is positive: Israel’s upscale and varied food scene — no matter what you call it — is a foodie’s delight. The cinematography is crisp, clean and brings the many dishes tantalizingly to life, so it’s a good idea to have a full meal before you sit down to watch.