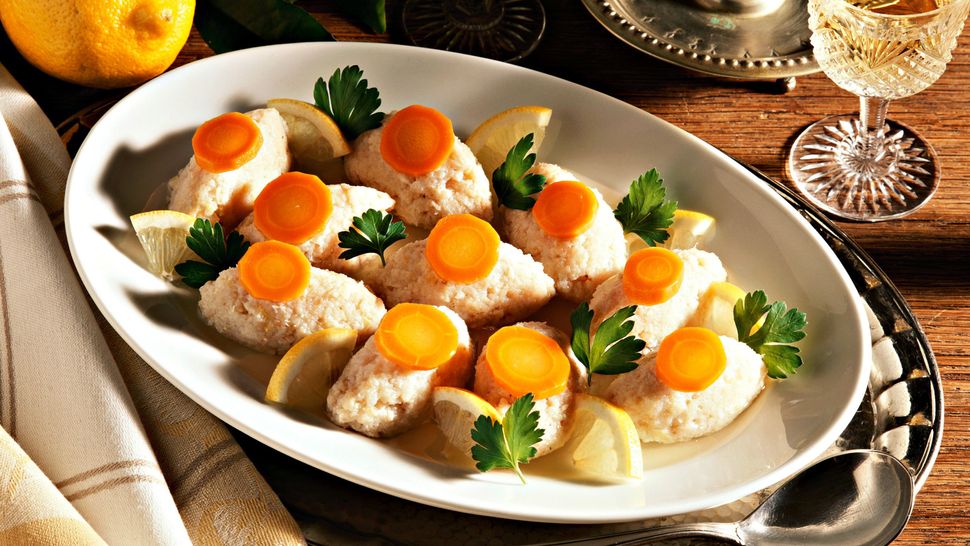 Gefilte may be the most ubiquitous fish dish in the Jewish culinary lexicon, whether we’re talking about the mass-produced, jarred versions available at supermarkets or the ready-made kind from kosher-style delis and dairy appetizer stores. But it is also the most celebratory fish dish, closely related to the haute-cuisine triumph quenelles de brochet.

Essentially a kind of fish dumpling, it consists of fillets that are ground — or more desirably, chopped, and thus left with bite and texture — and poached in a flavorful broth.

One trick in preparing gefilte fish is to strike the right balance with the different types of freshwater fish. The most successful and traditional inclusions will be pike and whitefish, and maybe meaty red carp, if one can be sure the carp has not ingested mud. Freshwater fish are essential for true gefilte, never mind such fashionable interlopers as the overly soft, sweet salmon, fibrous cod, and others. But the eastern European Jews who created the dish had easy access to freshwater fish, while many species have become scarce in North America, and therein lies one challenge.

The raw, ground or chopped fish is mixed with eggs, plenty of ground onion, a small amount of matzo meal as a binder, and generous amounts of salt and pepper. To test the seasoning, [cooks] sometimes taste the raw mix, but they do so at great risk: Freshwater fish can carry a dangerous parasite, and during the High Holy Days when much fish is being “gefilted,” the Centers for Disease Control reports many calls about parasite cases. Far better to make a small test ball, poach it, and then taste.

The poaching takes place in a broth flavored with the heads, bones and skin of the fish, along with many more sliced onions, a sliver of parsnip or the Italian parsley root known as petrouchka, a piece of celery root, disks of carrots and a handful of lightly crushed black peppercorns. After a long, very slow simmer, the fish balls are laid out in deep glass or ceramic trays or platters, with the strained broth and reserved carrot slices poured over. Left to set into an aspic as it chills in the refrigerator, the dish tastes best after eight hours and should always be served well chilled, never mind those few renegades who like their gefilte fish hot (and smelly, and cloyingly intense).

You might think all of these steps would assure gefilte perfection, but there’s one more: horseradish — a garnet beet version if tastes run to the sweet, or the sparer, sharper white kind that attains utmost pungency when grated at home. And don’t forget the matzo, the go-with of choice of serious mavens.

Things used to be even more complicated. The term gefilte (Yiddish) or gefülte (German) actually means stuffed, harkening back to the dish’s original preparation. In the olden days, prior to being poached, balls of the raw fish mix were wrapped in bands of black-gray fish skin. In a few kosher restaurants in the Marais, Paris’s Jewish quarter, the stuffing process was even more ambitious: Whole fish skins were filled with the fish farce, wrapped in cheesecloth, and poached, emerging as “whole” pike or whitefish from which portions were sliced crosswise. These were beautifully garnished with a shimmering aspic and rosettes of carrot. (Leave it to the French.)

Mimi Sheraton is an award-winning cookbook author and former restaurant critic for the New York Times.

Excerpt from “1,000 Foods to Eat Before You Die: A Food Lover’s Life List,” © 2014 by Mimi Sheraton. Used by permission of Workman Publishing Co., Inc., New York. All Rights Reserved.