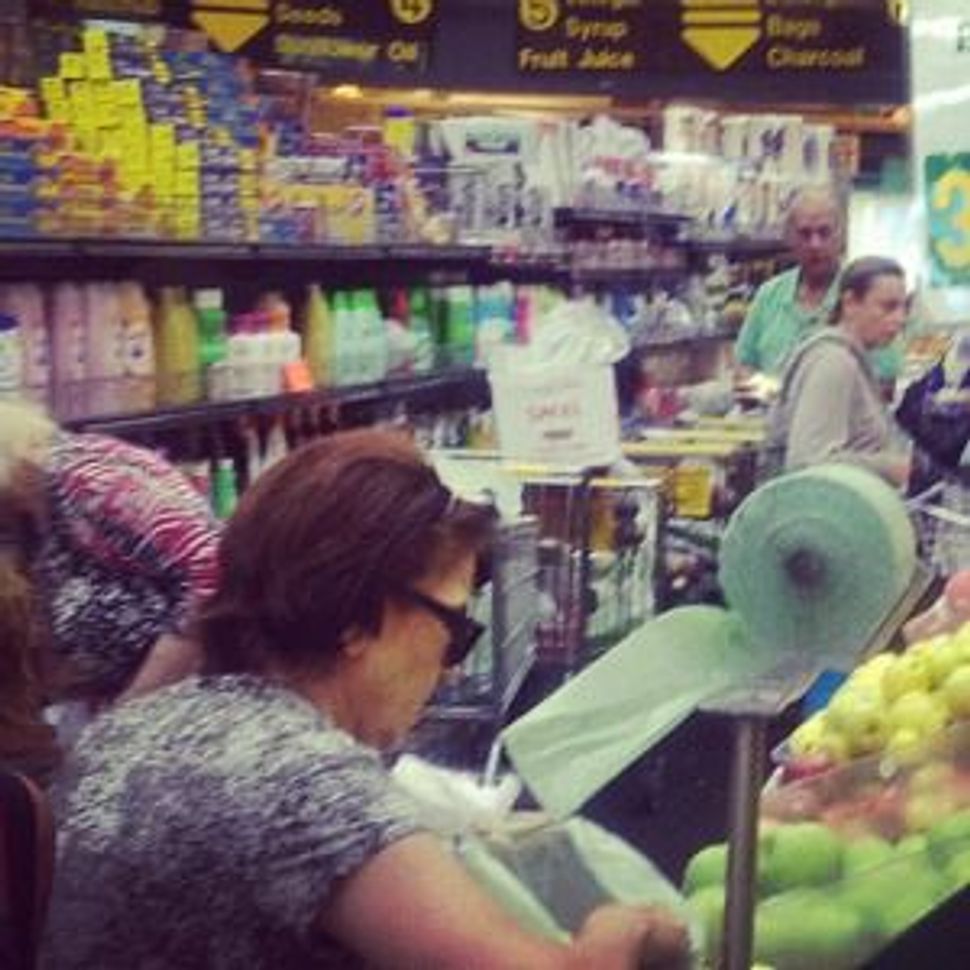 A line of shopping carts before erev Rosh Hashanah at Elat Market in L.A. Image by Rachel Rosmarin

Every year just before Rosh Hashanah, my mother and I engage in a ritual attempt to approximate my grandmother’s gefilte fish recipe. The recipe itself is an approximation. She cobbled it together from other Holocaust survivors, and perhaps gleaned a few tips from women in a displaced persons’ camp, perhaps remembering bits from what her own mother made do with in her Polish shtetl kitchen. It goes something like this: one-third buffalo carp, one-third pike, one-third whitefish. Naturally, I can’t divulge the whole thing.

When my grandmother retired to Los Angeles from New York in the 1970s, she navigated a whole new Jewish culinary landscape. For her fish, she settled upon Elat Market in the Pico-Robertson neighborhood, a store known for its quality, pricing and occasional violence. My mother and I went shopping with her from time to time, and I witnessed a side of my grandmother’s personality I’d never before seen.

We waited in line outside the store for up to half an hour before it opened, sometimes longer if the demand was so strong that the market needed to institute crowd control measures. When we finally made it inside, my grandmother gathered up all 4 feet 10 inches of herself and marched towards the fish counter, deftly and determinedly swerving around the wayward shopping carts for which this market is notorious (seriously — check out the Yelp reviews).

The fish counter swarmed with diminutive elderly women calling out to the Spanish-speaking fishmongers in complete chaos, in a half-dozen languages, each brutally jockeying for attention. “I said no heads,” one might insist in Farsi. “Three pounds, not one third of a pound,” another would complain in Hebrew. Russian wasn’t uncommon. Once, I’m almost certain we heard two women arguing in Ladino. Back in the 1980s, my grandmother wasn’t the only one with a Yiddish accent. She elbowed her way to the front of the mob in a way that I’ve come to believe only a survivor can.

Sometimes my mother pitched in and communicated our order in Spanish to the man behind the counter, which helped cut down on the frequent mistakes. We’d grasp our precious cargo tightly — one bag of ground fish, another of heads and bones for yoach — flee the market, and head towards Fairfax Avenue for the bakery and butcher shop.

After my grandmother was gone, my mother took the lead. At 5 foot 2 inches, she was a giant amidst this population. By 2006, the shopper demographic had shifted almost entirely to Persian, but the market was no less crowded and the shoppers no less mouthy. It’s like that year-round. Once, a friend told me, she had gone shopping at Elat for a specific type of couscous but couldn’t find it. She asked an aggravated Elat employee for help. The response: “Are you blind?”

Despite the hostility at the market — or perhaps in spite of it — we come back each year. But not all shoppers feel the same affinity, it seems, or maybe it’s just that the multinational generation of Gefilte-fish makers has begun to dwindle. At 9 a.m. on the Friday before Rosh Hashanah this year, my mother and I walked into the market without waiting in line and sidled right up to the empty fish counter to place our order.

When it’s my turn to shop for carp, pike and whitefish in years to come, it very well may be a lonely endeavor. I might be both grateful and nostalgic for the lack of bodily bruising, but you’ll never find me reaching for a jar of gefilte fish.