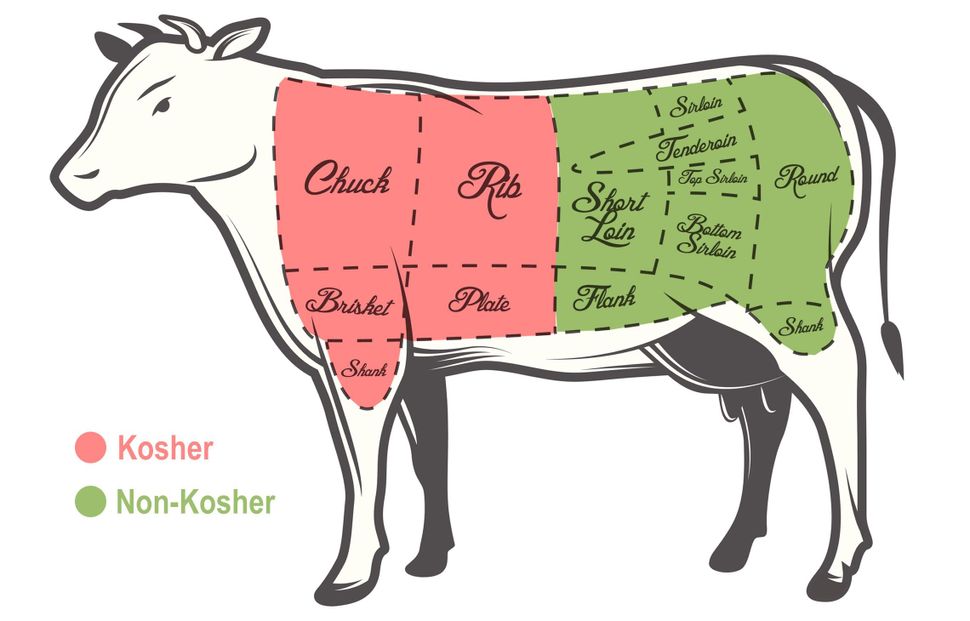 Kosher has become hip in recent years, for a variety of reasons. But for those who didn’t grow up in a kosher home and may be new to the laws of kashruth, the rules can be confusing — especially when it comes to purchasing beef. Whether we’re grilling in the summer or making a heartwarming pot roast for the holidays, it’s helpful to know some of the basics. Here are ten tips for understanding kosher beef:

1. Which animals are used for kosher meat? 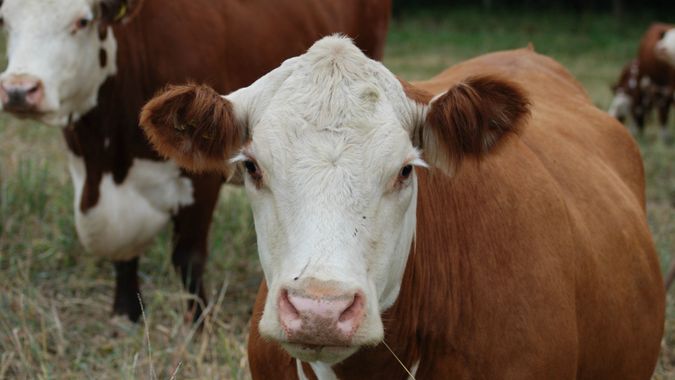 A herd of cows. Image by Anders Gustavson/Flickr

Any large animal that both chews its cud and has split (cloven) feet is permitted under the laws of kashruth. Beef and lamb are the most common kosher meats (goat, sheep and deer are also suitable).

2. Why is kosher beef so expensive? 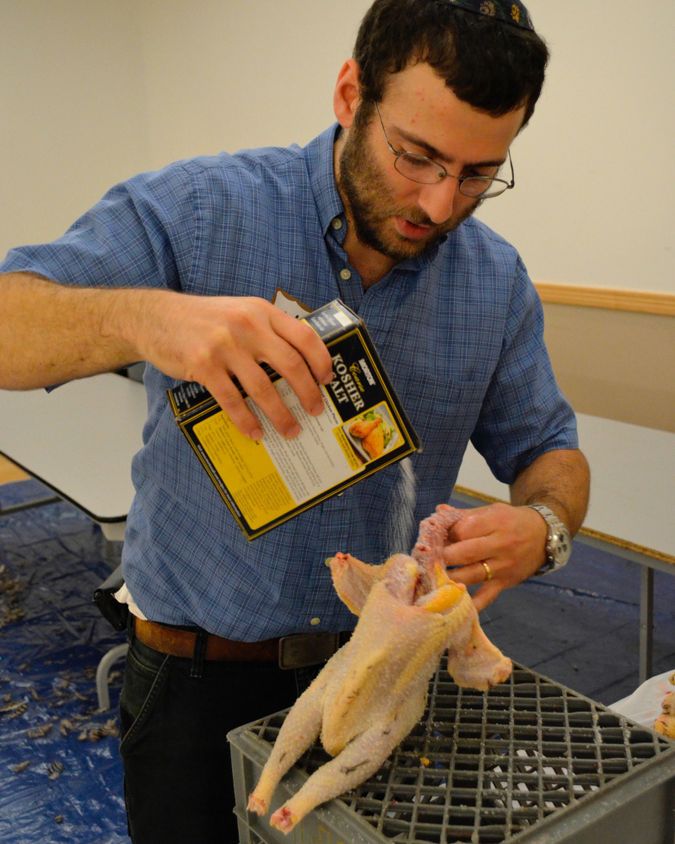 After draining the chicken of blood, Grow and Behold founder and owner Naftali Hanau removes the rest of the blood by coating it in kosher salt. Image by News21-National/Flickr

The process of koshering beef is labor-intensive and time consuming. First, the slaughter must be done in a humane manner (shechita) by someone (called a shochet) who is trained to butcher the animal in accordance with the laws of kashruth. In addition, after slaughter, the animal is checked to be sure it was healthy: If there is any apparent disease, broken bones or scars/adhesions, the meat is considered unfit. The net yield of healthy, properly slaughtered meat is anywhere from 20%–40% compared to treyf (non-kosher) meat. Finally, kosher meat must be soaked and salted to rid the animal of blood prohibited by the Torah. Because of all of these steps, kosher meat prices are pricey.

3. Where does each cut come from?

There are five “primal” kosher cuts that are carved from the front half (forequarters) of the cattle: chuck, rib, brisket, plate and shank. These large pieces are then butchered into smaller, subprimal cuts such as short rib, club steak and silvertip roast.

4. What are the expensive cuts?

5. What are the cheaper cuts?

6. Which cuts are best for what? 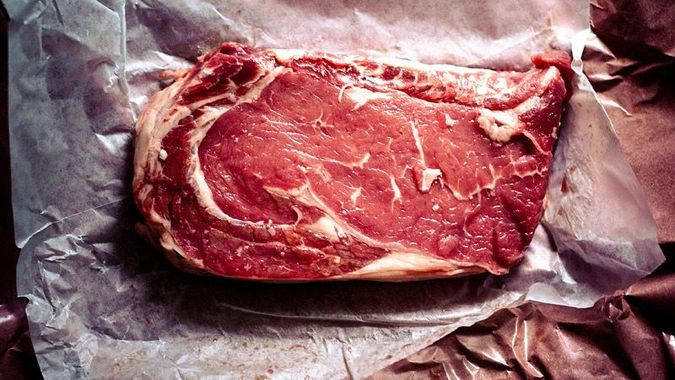 Rib is tender and benefits most from dry-heat cooking such as grilling, broiling and roasting. One exception is deckle (from the top of the rib), which is best as pot roast, stew or cholent.

Chuck is flavorful but can be tough. In order to make it juicy and tender most portions should be braised, stewed or otherwise cooked with liquid (or liquid-loaded vegetables) slowly and at low heat. Chuck is often cut up for stew meat and ground for burgers. On the other hand, some chuck cuts are butchered in a way that makes them fine for grilling/broiling (chuck minute steak, sometimes called filet split) or roasting (silvertip).

Plate is a fatty cut from the belly, just below the rib, and includes skirt steak, hanger steak and short rib. It’s good for braising, although the steaks also benefit when marinated and quickly grilled.

Shank, from the leg, is tough, dry and sinewy, so is best when braised or used for soup and stock.

No, it’s a way of cooking beef, usually by marinating the meat, then grilling it, then slicing it across the grain. Most kosher London broil is cut from the chuck; it can be a flatiron steak, minute London broil or simply sold as “London Broil,” depending on the butcher.

8. Can you substitute a cheap cut for an expensive one?

That depends. Certain cuts, such as first-cut brisket, will contract like rubber over the high dry heat of a grill. It won’t ever replace a tender rib steak. However, chuck is very flavorful, so a quickly broiled chuck steak, while a bit chewy, can be extremely satisfying, as can a chuck roast, and they are less costly than rib portions. Marinated London broil is another way to cook a less expensive “steak;” skirt steak and hanger steak are generally less expensive than rib steak. Deckle and kalichel are delicious, less costly alternatives to brisket for pot roast. Silvertip is less expensive than rib, but makes a delicious oven roast.

9. Should you salt kosher meat?

Assuming you have no health issues, the answer is yes, but use less than for non-kosher meat. Salt brings out flavor. Kosher meat has been soaked and salted, but also rinsed, and the salt does not penetrate deeply.

Maybe. Steaks such as true filet mignon, New York Strip, porterhouse, sirloin and others, come from the loin, in the back half (hindquarters) of the animal. (Some kosher butchers sell mock “filet mignon” but it is actually the center of the rib.) The hindquarters contain forbidden fats and the sciatic nerve, both of which are difficult and time-consuming to remove and have been considered too costly to kosher (they are sold to non-kosher markets). In Israel, where the non-kosher market is small, the animal is koshered “from nose-to-tail,” and now, several producers in the United States have begun to offer hindquarter beef that has been koshered in a process known as nikkur, under strict supervision: Grow and Behold, KOL Foods, Atara Foods and Bisra Meats.

Ronnie Fein is a cookbook author, food writer and cooking teacher in Stamford, Connecticut. She is the author of “The Modern Kosher Kitchen” and “Hip Kosher.” Visit her food blog, Kitchen Vignettes, and find her on Facebook, Twitter and Instagram