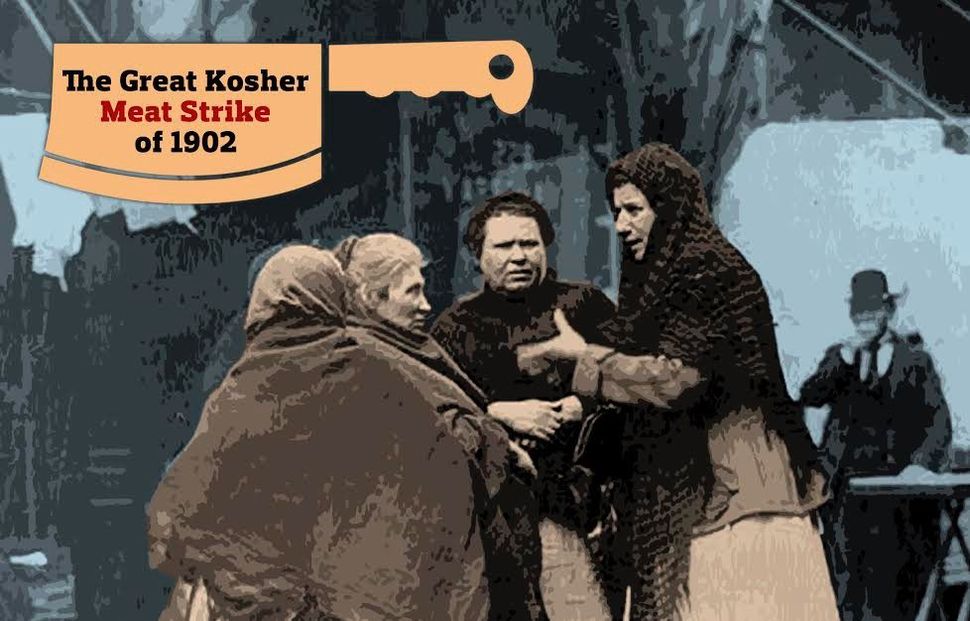 What follows is a front-page story published in the Forverts on May 15, 1902, the day thousands of women took to the streets of the Lower East Side of Manhattan to boycott the price of meat. Within a week the strike spread across the country; by June 9 the price of meat had dropped.

Thousands and thousands of balaboostas rebelling against the meat fraud — First time ever of such scenes since the quarter became Jewish — Confrontations in hundreds of butcher shops — Patrol wagons filled with arrested women — Butchers forced to lock up shops.

Kerosene Poured Over The Meat

In the 25 or 30 years since the Jewish Quarter of New York was settled with Russian, Polish, Galician, Hungarian and Romanian Jews, the Quarter hasn’t seen the likes of what occurred today. Thousands of women took over several streets to confront butchers and their customers. The entire Jewish Quarter, and nearly every tenement balaboosta, with tears and curses for the meat price inflation, swore not to buy any more meat. They demanded their boycott is observed. In many locales the butchers met the brave women with blows, and a fight broke out. Meat was torn and thrown into trash cans, and soaked with kerosene. Horses were seen climbing over piles of discarded meat.

It started on Monroe Street near Pike but within a half hour the fires spread among the tenement houses until nearly 10 o’clock when the entire Jewish Quarter, from Cherry Street to Houston and from Grand Street Ferry to the Bowery was lit up by the brave striking balaboostas.

Every sidewalk was tightly packed with them. They lined up by the hundreds, gesticulating with their hands, yelling, crying over their impoverishment and cursing the fraud perpetrated against the poor. Scores of them went about bloodied by the fighting. Patrol wagons were seen packed with arrested women. By 10 o’clock 70 people were arrested, mostly women. In court they were treated very lightly. One of them was released, and the rest were fined three dollars each. A huge mass meeting will be held by the brave women tonight in New Irving Hall, 218 Broome Street.

At 88 Monroe Street yesterday night there was a gathering of Jewish balaboostas. There was great excitement and a collection garnered $28.35 for a hall and additional expenses. Two committees were elected, one of women and another one of men (we’ll publish their names later). The committees were empowered to set out this morning to all homes to demand the women not buy their meat at any shop that won’t lower prices.

The enthusiasm with which the women’s committee was received is indescribable. All the women promised not to buy any meat.

The first confrontation was at a butcher shop at 51 Monroe Street. The butcher there sent out a delivery girl to bring meat to a customer. The housekeeper at the house across the street at 52 Monroe Street tore the meat out of the girl’s hands saying: “We aren’t eating meat and your customer also mustn’t.” And a fight broke out. The names of the women involved in the conflict are:

Shortly afterwards there was another tussle at 29 Monroe Street at Miller the butcher. When the women’s committee approached the butcher asking in a friendly manner to have a word with him, asking that he not sell any meat and to join the balaboostas on strike, he left and went upstairs to his house. Next to the butcher shop is a shirt factory. When the workers heard the women on the street talking, they came down. Meanwhile, the butcher Miller grabbed a pail of water and soaked the men and women on the street, at which point a fight truly erupted.

The women’s chants nearby were really interesting: “Working men labor very hard to afford meat,” one yelled. “Women eat only their own flesh. Where is it supposed to come from? 17 cents a pound of meat, 6 cents a pound of bones!”

One woman cried while chanting, invoking her neighbor saying: “Her children sadly have to work, while the children of millionaires grab the last bit of nourishment from their mouths.”

And yet a third woman chanted: “They think women aren’t human, that we can be fooled. We’ll show them we’re more civilized than those gluttonous millionaires sapping our blood.”

Immediately following, there were these scenes at the same time, at three butcher shops: At 111, 126 and 129 Monroe Street. At 111 the butcher beat the committee. At the same time on Henry Street, on the same block, a roar could be heard. A butcher demanded that the crowd permit his customer to exit with their meat. The women began chanting:

“What kind of entitled woman is she that she’ll eat meat and we won’t?”

At 51 Pike Street there was an occurrence involving a landlord. The butcher’s wife was delivering meat to a customer. One of the committee members approached her, Mrs. Levy, and requested she give the meat to the committee. The landlord ran off from No. 52 and joins the butcher’s wife and a tussle broke out. The landlord started grabbing the meat himself, but was forced to surrender the meat, which was then tossed into a burn barrel.

At one locale, a butcher in his white apron sat. A woman walked by and yelled out rancorously, “Take a look that apron-wearing thief!” And all the other women followed her lead and started yelling and whistling.

Other rumbles took place on Madison, Christie, Delancey and all the surrounding streets.

At the corner of Grand and Pitt Street a circle of women stood discussing a woman who had just been taken from their midst and arrested. She was the lead organizer. “It’s all right, it’s all right,” an older Jewish woman repeated, an empty basket in her hands. “Every woman will ante up 10 cents and we’ll have $150 to bail out all the arrested women.”

The Sickly Must Eat Treyf — So Says An Observant Woman

A woman bought one pound of meat at the butcher, Louis Glazman of 23 Essex Street. When she attempted to exit, a large group of women attacked her. “I have a sick husband. He has to eat meat.”

“A sick individual can eat treyf,” an elderly sheytl-wearing woman called out. Others said that back home they made due with herring and bread and now we seem to think we’ll die if we can’t have meat.

From the onset all the police treated the women very sympathetically and were supportive. Later on, however, they became stricter with them and at the station houses one saw many members of the Meat Trust.

Read what the Forverts published the next day…

Liza Schoenfein is food editor at the Forward. Contact her at [email protected] or on Twitter, @LifeDeathDinner