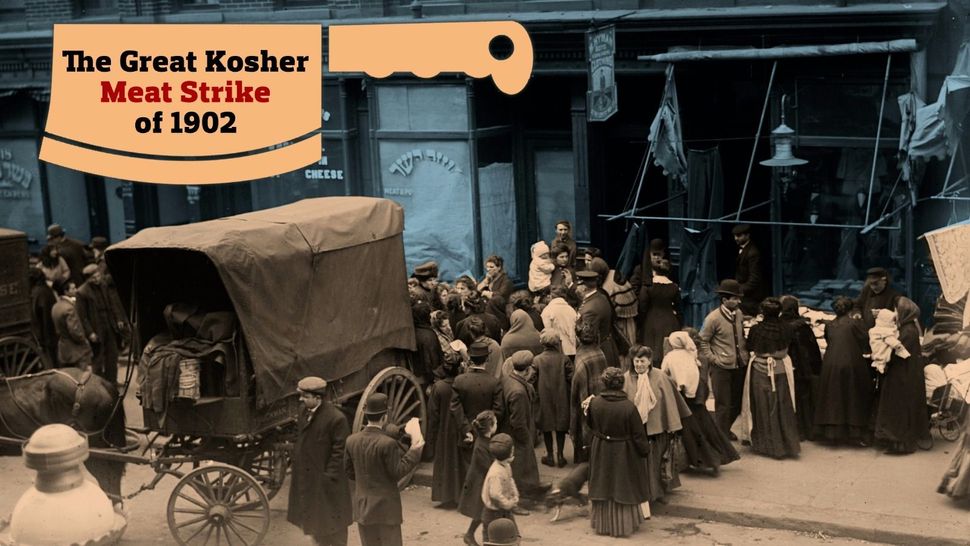 The day after the Forverts published an article marking the eruption of a massive meat strike that began on May 15, 1902, the paper’s editor-in-chief, Abraham Cahan, wrote an editorial praising the women “who participated in the fight against the blood-soaked tyranny of a gang of meat thieves…” He wrote, “Whether or not these women’s fight succeeds, the Jewish people can be proud of it forever.” The editorial goes on to discuss Jewish perseverance and strength, before taking on “the entire current capitalist system.”

Below is an edited translation of his editorial.

The whole city is talking about the crazy commotion in the Jewish Quarter, which started soon after meat rose in price.

Meat prices didn’t just rise in the Jewish Quarter alone. Gentiles also have a Trust [a group of vendors controlled by industrial bigwigs] that scams the small butcher shop owners and the masses. The Gentiles, however, not long ago discovered how sweet it is to be a pauper in this country. As such, they’ve not protested. Whoever can pay the higher prices does so. And whoever cannot leaves with less meat. They made no brouhaha about it. Their grimaces were barely visible. Quietly they bowed their heads before the power of capital, and to the strength of the fat meat magnates.

Jews, and poor Jews, women of the impoverished Jewish masses, were the only ones who let their pain be heard. Their troubles, their fury, the innumerable ones who participated in the fight against the blood-soaked tyranny of a gang of meat thieves, were the wives of Jewish men, they were the children of the Jewish people.

This protest movement of the women of the Quarter is such that no Jew ever need be ashamed. Whether or not these women’s fight succeeds, the Jewish people can be proud of it forever. We’ll always be able to point to this fight in the Quarter as evidence that despite the centuries and thousands of years of Jewish subjugation under foreign despots, and despite generation after generation of Jews being yoked, enslaved and trampled under the feet of all types of tyrants and oppressors, despite all this, enough spirit and striving for freedom and justice remains, such that when injustice occurs, when cruelty is enacted against them or others, they are first to lead others in protest to fight against the injustice, against such cruelty.

Women and men of the Quarter are currently incensed and determined against the wholesale butchers who insist on creating personal wealth out of the blood of the poor. They’re out fighting against such unrestrained bloodthirsty capitalist Trust beasts, and that’s good, and it’s right, and that is how it should be. But are the men and women of the Jewish Quarter positioned to do something against this Trust? That is the burning question that each of us affected ones must ask ourselves.

We hope the people can simply crush the Meat Trust at its head, just like all other Trusts that oppress and choke the people. But we also don’t believe much can be accomplished in a few days in several street protests by women.

It’s good, very good, that the women were determined and that they decided to raise their voices against the Meat Trust leeches. No man’s voice would resound with such an echo as do the women’s voices that weep, yell out about their own lives, those of their young children on behalf of the poor slave, harnessed in support of his half-starved family. All of which is only half the battle. Yet, it’s good to awaken and raise people’s consciousness. It’s good because it will open the eyes of everyone who is asleep and doesn’t wish to see what is going on in the world.

When the people want to awaken and see the shame and misery throughout the community, then the work of the awakened will be completely different. Then, they’ll see it’s not the meat that needs to be soaked in kerosene, and not the puny butchers, who aren’t responsible, but rather the huge Trust, the entire current capitalist system with its capitalist politics — from which the vampires, leeches and bloodsuckers of the people grow and prosper — all that has to be drenched in kerosene, lit on fire and then, on the pile of ashes of today’s system, a community built of free and equal people.

Liza Schoenfein is food editor at the Forward. Contact her at [email protected] or on Twitter, @LifeDeathDinner