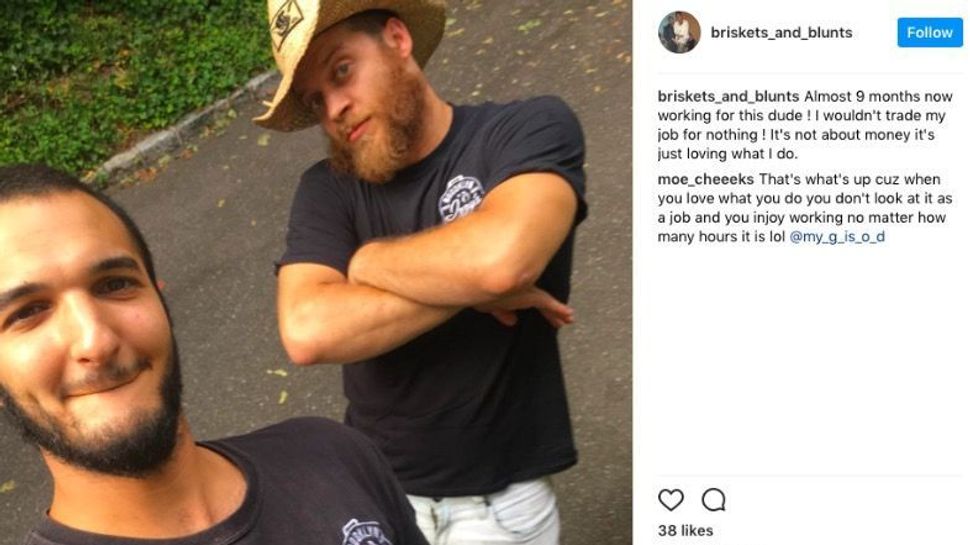 What happens when the brother of a staunchly anti-Israel activist works at a wildly popular kosher barbecue joint?

Then last week, The Jewish Week reported that the The Jewish Defense Organization (JDO) — a vigilante ultra-Orthodox group committed to rooting out and fighting anti-Semitism — was handing out fliers telling members of the Crown Heights community to avoid Izzy’s BBQ because Mohammed Sarsour, brother of anti-Israel activist Linda Sarsour, works there.

But who is Mohammed Sarsour? And what, if anything, does he have to do with his sister’s politics?

Not much, it seems, if we take his Instagram feed at face value. Unlike his sister, he’s not particularly religious. He’s married to a Dominican woman named Dayana, who doesn’t wear a hijab (as Linda Sarsour does), preferring body-con dresses and low-cut tops. In one Instagram post, they’re holding a bottle of tequila. 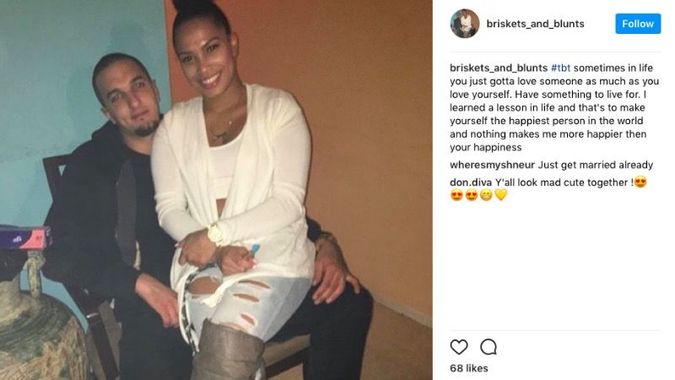 Mohammed Sarsour poses with his wife Dayana Image by briskets_and_blunts/Instagram

Mohammed Sarsour has a love of nice cars and a penchant for smoking marijuana, hence his Instagram handle “briskets_and_blunts.”

He apparently dreams of the good life: There are videos of him on yachts and next to fancy cars, with a heaping dose of inspirational quotes peppered in-between. He frequently quotes a wealthy entrepreneur-slash-advice guru named Gary Veynerchuk.

It’s unclear if he is anti-Israel or anti-Zionist like his sister, but he certainly seems comfortable working around major Zionists. Although Lubavitch hasidim are not the most Zionist hasidic sect (that distinction would go to Gerrer hasidim), they are very pro-Israel. The owner, Sruli Edelman, who is shown reacting playfully to Mohammed Sarsour’s antics in Instagram videos, is Lubavitch. There are videos of Sarsour hamming it up for customers, dancing to Hasidic pop singer Benny Friedman as he works, while Benny Friedman himself films with his phone. In a video of a colleague singing funny versions of national anthems, Sarsour stands by as a colleague sings “Hatikvah,” Israel’s National Anthem, before requesting the American national anthem. 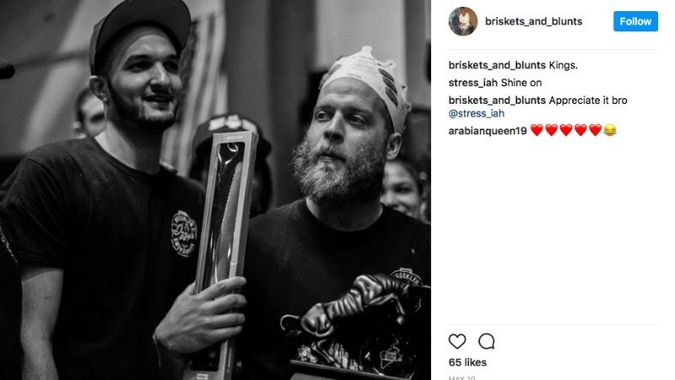 Mohammed with his boss, Sruli Edelman, who is a Hasidic Jew, after winning Brisket King NYC. Image by briskets_and_blunts/Instagram

So, is the concern over his alleged allegiance warranted?

He posted about his sister when she got arrested during a protest, and indicated support of her efforts.

Yet in his day-to-day life, as illustrated on Instagram, he seems more concerned with being the best pit master in kosher barbecue and getting high than in politics.