How An Orthodox Mom Made Marijuana A Mitzvah 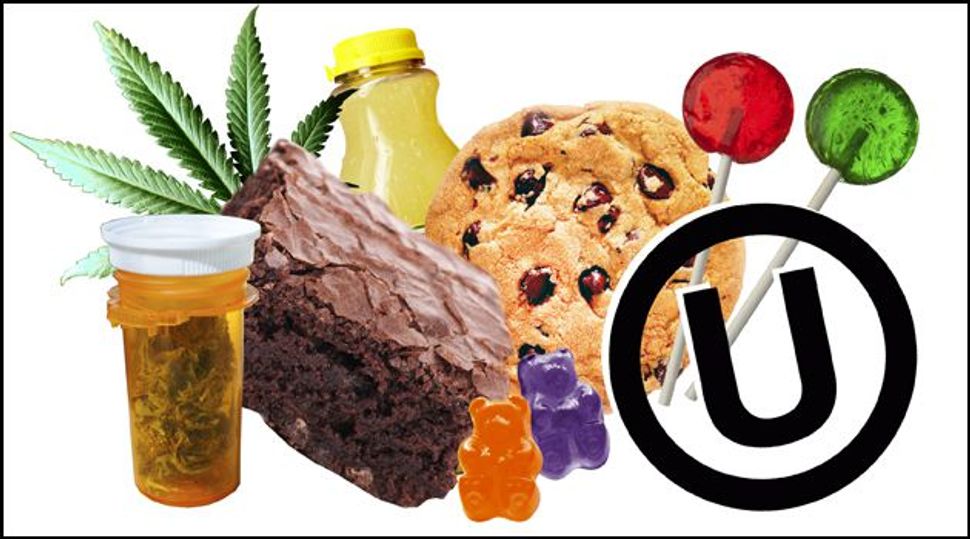 Selling cannabis edibles is hardly the typical job for anyone, let alone an Orthodox Jew.

But that’s exactly what Shifra Klein, a mom of four and member of Los Angeles’s Ultra-Orthodox Lubavitch community, does. In fact, before she became a producer of kosher edibles with her company Mitzva Herbal Co., she used cannabis to treat two of her own children with special needs — an 11-year-old daughter with ADHD and a 12-year-old son with autism.

Both children had been taking a variety of different psychiatric medications, each with different side-effects that were debilitating. “We thought that there has to be an alternative,” said Klein. After seeing media coverage on the benefits of cannabis, and hearing stories from other special needs parents who used cannabis on their children, Klein decided to do her own research. Soon, she began giving her children medical marijuana. The results, she said, were nothing short of miraculous.

Which is why she started Mitzva Herbal Co., a company that sells kosher edibles certified by the Orthodox Union (OU). 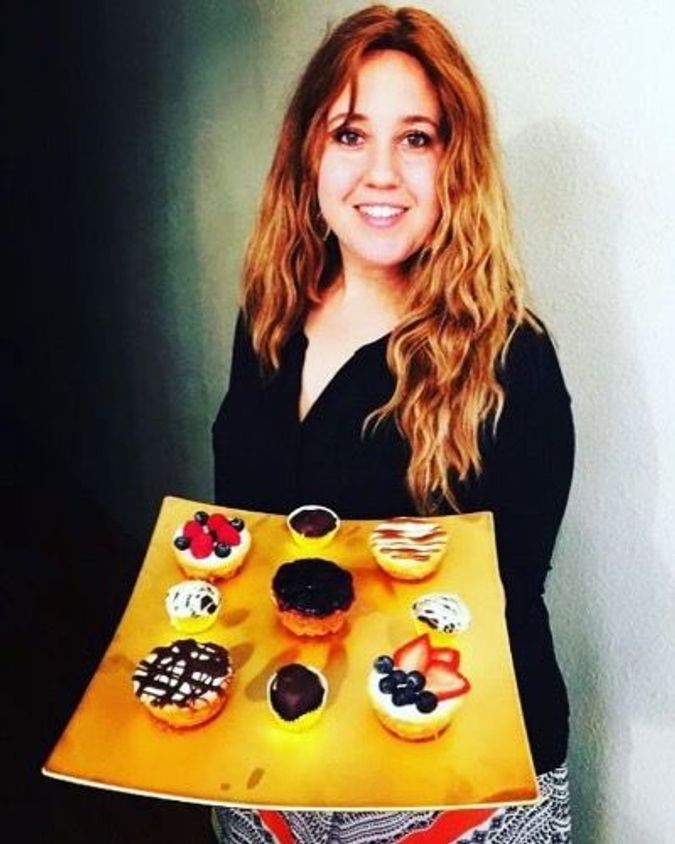 The name Mitzva Herbal Co. is part technical and part spiritual. “Obviously, cannabis is a plant, so we wanted herb,” said Klein. “Mitzva” comes from Klein’s feeling of social obligation. After seeing results with her own children, she felt she had a duty to share the benefits of medical marijuana with the community. She thought it would be selfish of her not to share the life-changing benefits of this incredible herb. “How could we just keep this to ourselves?” said Klein. “We need to help other people with this and educate the community.”

“Co.” is short for collective. There are three ways to obtain medical marijuana: from a dispensary, from a cooperative or from a collective. A dispensary is for-profit shop and, as long as you have a valid medical marijuana card, you can buy any of the products for sale. A cooperative is not-for-profit, but still provides a brick-and-mortar shop to sell the cannabis. A collective is also not-for-profit, and is a for-the-patient, by-the-patient institution, where patients pool their resources to provide cannabis to one another.

As a collective, Mitzva Herbal Co. does not have a storefront, and it provides cannabis only to members of the collective. It’s a system that also allows Klein to be more selective about who gets to use her products. “We’re not looking for crazy stoners or people wanting to abuse the product. We’re really looking to service people with medical needs,” said Klein.

“Someone who is looking to get an immediate high, wouldn’t be so interested in our product [anyway] because we do medical dosing,” said Klein. Medical dosing of edibles is important because consuming cannabis orally has the strongest effect. If you consume too much, the high will be too intense, making the experience less than savory. Instead of producing a 300 milligram cookie where it’s impossible to determine how many doses are in a single bite, each cookie or brownie or lollipop that Klein produces are exactly 10 milligrams each. She also specializes in micro-dosing, where her edibles are as low as one or two milligrams each.

And Mitzva Herbal Co. does more than just supply patients with cannabis; it’s a holistic medical service. “We give care; care that you’re not going to find in other places,” said Klein. “I feel like that’s a huge reason why half our patient base isn’t even Jewish.” 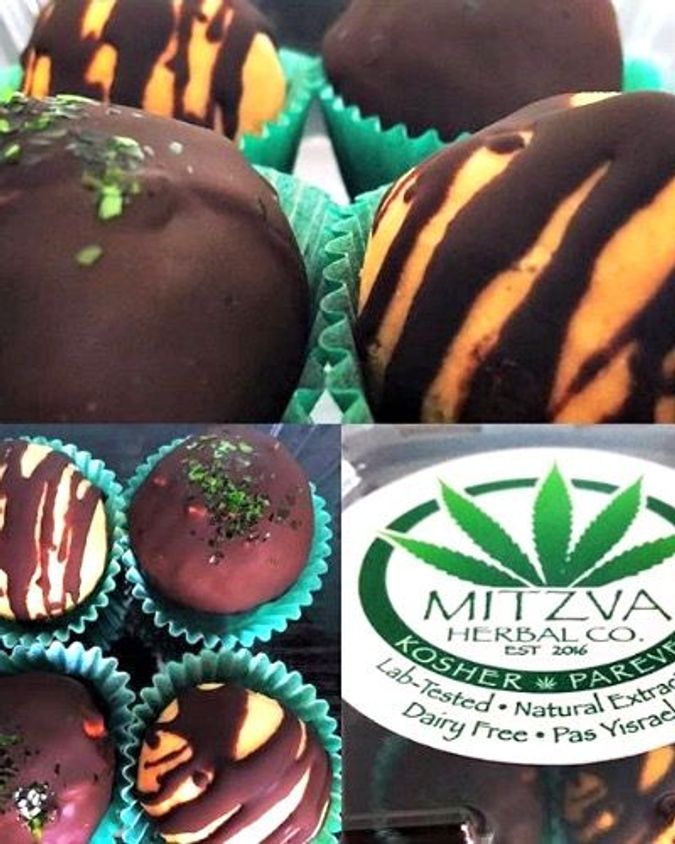 Each of these desserts have medical dosages. Image by Mitzva Herbal Co.

For one patient, that holistic care means that mitzva Herbal Co. does her grocery shopping and finds babysitting care for her child while she’s in Cedars-Sinai Hospital for her daily treatment.

Even as her business grows, Klein doesn’t want to lose that part of her business. She wants the patient care to grow with it, hiring team members to provide services beyond medical marijuana.

Because demand for her product has increased, she will begin distributing to 28 dispensaries across California sometime in the beginning of August, opening up her client base. After her original facility was sold a few weeks ago, she was unable to produce edibles and was left with a limited stock. Luckily, she was able to find another facility, a larger one, which will allow her to not only continue production, but to expand.

For now, it’s still an exclusive product available to a select group of customers. But even as it’s selective, the ethos of the brand is about inclusivity, which is why it was so important for Klein to get the OU certification.

“We felt [the OU] was so universal [that] when you see the OU you have that kind of comfort level, like ‘oh, it’s certified, we’re good,’” said Klein. “We wanted to be inclusive. We didn’t make this product specifically for Jewish people, [but] it’s great that Orthodox people can now be included.”

Shifra acknowledged that getting OU certification was no walk in the park. “It took us about nine months to get them on board with us.” When they first approached the OU, the Kleins didn’t receive an immediate, “no.” Instead, the Kleins went through a lengthy interview process with the OU so that the OU could ascertain that Mitzva Herbal Co. was strictly for medical purposes. 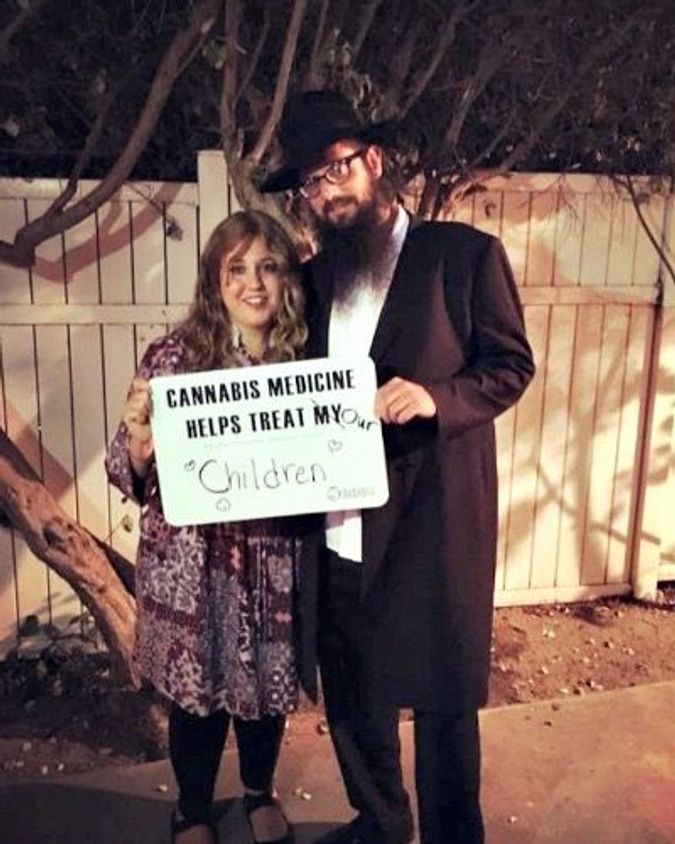 Shifra Klein poses with her husband, with a sign showcasing their support medical marijuana. Image by Mitzva Herbal Co.

Mitzva Herbal Co. isn’t the only cannabis company certified by the OU. Vireo, a Minneapolis-based company that was one of five companies to be awarded licenses to distribute marijuana in New York, obtained OU certification in December 2015.

In Vireo’s announcement, Rabbi Menachem Genack, OU’s CEO said, “Using medical cannabis products recommended by a physician should not be regarded as a chet, a sinful act, but rather as a mitzva, an imperative, a commandment.”

About a month later, in a statement published on its site, The OU reaffirmed its decision, writing: “The OU stands by its decision to certify medical marijuana products that offer significant value to alleviate the suffering resulting from serious and debilitating medical conditions.”

But the stigma associated with marijuana is still persists within Orthodox circles.

“The stigma is coming from either a lack of education and miseducation. When we get any kind of negative feedback, we know that’s where it’s coming from,” said Klein. “Because we know we’re good people, we know we’re doing the right thing.” And she sees it as an opportunity to educate and inform, which has led to a small, but growing consensus in support of her efforts.

Klein isn’t embarrassed or ashamed of her children’s cannabis use, but she’s justifiably reluctant to be open with her community and her children’s schools about it. “We felt that we might get some backlash and we wanted to have a more non-judgemental reaction of how they’re behaving in school,” said Klein. Instead, she told the schools that her children had changed medication. She instructed teachers to keep a log of their behavior to see if the medication was working. The change in her autistic son was nothing short of remarkable: he was focused, he was performing tasks as instructed, he was able to maintain eye-contact. He even began speaking full sentences after years of minimal language ability.

Medical marijuana also proved live-saving for Klein’s daughter with ADHD, who had a terrible reaction to Ritalin — the most commonly prescribed drug for the disorder. “She was hospitalized for dehydration, she had lost 40 pounds, and she was not a big girl to begin with…she got down to like 60 pounds,” said Klein.

But then she began taking cannabis oil three times a day, and she was able to regain the weight while still maintaining the focus she had on Ritalin.

Even after these remarkable changes, Klein still chose to keep mum. “But I’m sure, since we’ve had a lot of press in the past few weeks, it will be out there shortly,” Klein said with a laugh. And this sudden brush with fame may have led her to be a bit more open with the institutions her children are involved with. Last week, she met with her daughter’s new school (her daughter graduated 5th grade and will be going to Junior High School) to discuss her daughter’s unusual medication regimen. Her daughter is also currently in camp, and they are aware of her daughter’s cannabis, facilitating her daughter’s medical cannabis consumption.

Even though negative attitudes towards medical marijuana continue to persist, Klein doesn’t allow it to bother her too much. “When we hear these success stories, that fuels us, not the negativity,” said Klein.

And she only has to look to her own children’s success for a daily dose of encouragement that she’s doing the right thing. “You know, I ask her how [my daughter] feels,” said Klein. “And she’ll tell me, ‘Mommy, I feel good, like focused, like calm like I do on the Ritalin, but I don’t feel yucky anymore.’ She was always nauseous. It’s amazing.”

How An Orthodox Mom Made Marijuana A Mitzvah