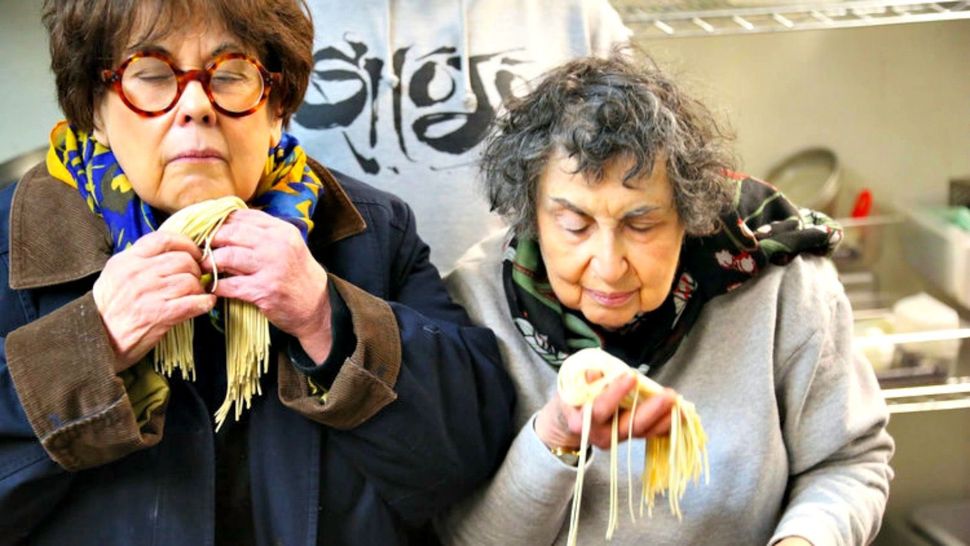 Noodle Meditation: The Brass sisters, Marilynn (left) and Sheila, star in a new cooking series in which they flirt their way into professional kitchens before trying what they learned at home. Image by Bruce Seidel

They’ve been bestselling authors, social-media stars and champion bakers. Now, Marilynn and Sheila Brass are reinventing themselves again. With “Food Flirts,” their new PBS show, the Brass sisters have become the most irresistible stars in TV’s vast universe of food shows.

There’s no hip-shaking here: “Flirting” means these culinary detectives cajole their way into kitchens where adoring young chefs share recipes like pastrami or ramen, which the Brass sisters (with executive producer Bruce Seidel and supervising and culinary producer Denise Swidey) develop at home into original mashups such as pastrami-ramen kugel. The consistent ingredients are their encyclopedic food knowledge, razor wit and restless curiosity. The Forward reached the Brass Sisters at their Boston-area home.

Food Flirts is completely unscripted. How did that work for you? Did it lead to unexpected moments?

Sheila: It was easier for me.

Marilynn: Me too. ‘Food Flirts’ is a bit of a reality show with cooking and baking. It’s funny to say this, but if you see the shows, you’ll see us as we really are.

Sheila: Including the wrinkles.

Marilynn: And the jokes. There was a process, of course. We did research — on dosa; on burgers; on the origins of pastrami and ramen. Then they sat us down in two director’s chairs and threw questions at us: ‘In your own words, tell us about baklava’ — that kind of thing. So we just chatted, without notes. We’re ourselves. It makes it a much more entertaining show than staying with a script. You never know what’d going to happen or come out of our mouths. 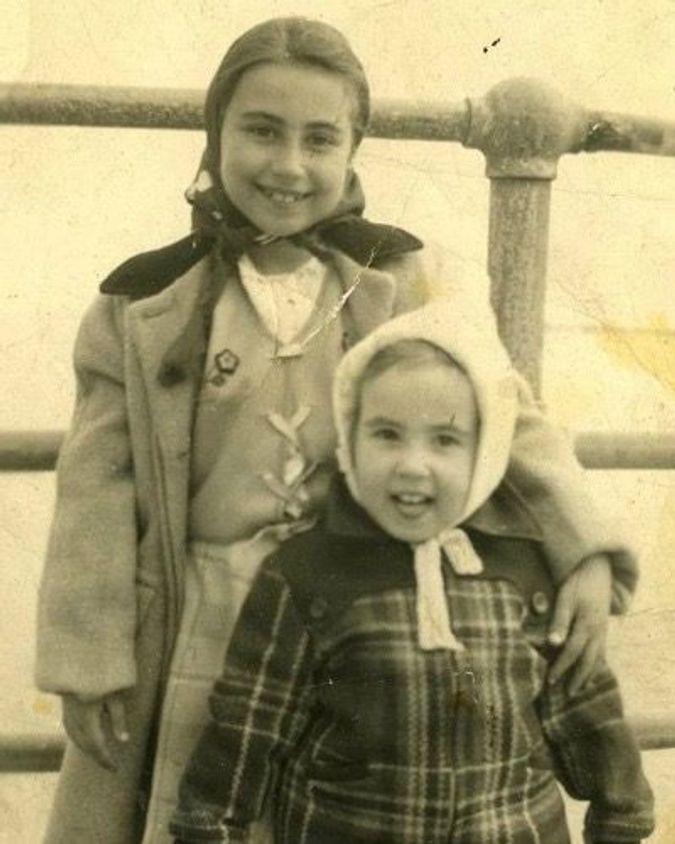 Sheila: But nothing bad!

You have a legendary collection of kitchen collectibles: 6,500 cookbooks and 5,000 pieces of culinary memorabilia. Is there anything Jewish in there?

Sheila: [Laughter] Are you kidding?

Marilynn: There are two treasured possessions, both very Jewish. One is a blue and white enamel pot. Our grandmother used it to render chicken fat in the 1930s. My father found it in the cellar of our old house. I did the hora for joy when he brought it up. The other is a triangular pastry board and rolling pin. It was made especially for our mother in the 1940s. Our father was the chief pharmacist at Beth Israel hospital [now Beth Israel Deaconess] in Boston. A colleague of his was into woodworking, and made it by hand.

Sheila: On the inside cover of our last cookbook [‘Baking With The Brass Sisters’], you can see a photo of a knife our grandmother used to trim Sabbath candles with every week. It’s just a little knife, four inches long, with wooden handle. But it’s a treasure.

What are your strongest Jewish food memories from your childhood in Winthrop, Massachusetts?

Sheila: Watching my grandmother make farfel in her kitchen in Winthrop. It was my first brush with pasta. I didn’t know it was pasta. But it was wonderful. I also remember my mother and grandmother sitting into the night making gefilte fish. My mother was the challah queen. She made challah that floated on air.

Marilynn: Every Sabbath, my mother would make her challah, chopped liver, chopped herring. While the challah would bake, she’d play the piano, by ear, and take requests. Then she’d take a break to punch down the dough.

Considering your careers in food, does your family have unrealistic expectations around holidays and what you’ll cook?

Marilynn: [Laughs] Yes. We had an aunt by marriage, Aunt Ida, who always traveled with these tins at family gatherings. I always asked why. Turns out they were full of cookies: mandelbroyt, mun [poppy] cookies. Now that we’re at a certain age, we’re the ones with the cookies. Except they’re ginger snaps, white chocolate-raspberry or brownies. It’s normal and it’s good that when one generation passes on, another comes forward to take their place. But we always say that especially at the holidays, you should do a gentle interrogation of the elders. Get the stories. Get the recipes. That’s why we wrote ‘Heirloom Cooking.’

I love that you’re calling the new show “Food Flirts.” What does it mean?

Marilynn: I keep saying to Sheila, even on the show, ‘We’re harmless.’ She says, ‘Speak for yourself.’ The flirting is completely nonsexual. There’s an expression, ‘mutton dressed as lamb.’ We ought to act our age. But we should also be evergreen and open to things. The ‘flirting’ is fun. What makes it funny is that it’s absurd. When Sheila feels Mamaleh’s chef Tyler Sundet’s muscle, and he feels hers, it’s just funny. When was the last time you went up to an older woman to feel her muscles?

But age almost seems irrelevant on the show — you’re so curious about food.

Older people are so often dismissed. People think once you pass a certain age, it’s, like, over. That’s not the way it is. If you’re lucky enough to have mental and physical health, it’s important to try new things. People have to respect older people. They still can make a contribution. A lot of charity and volunteer work in this country is done by older people. But we have to have a safety net so people can get healthcare and housing and that there should be no food insecurity. Healthy people contribute. People who are connected contribute.

In the food mashups you create on the show, “Food Flirts” is also about diversity. How much of that was about sending a message?

Marilynn: Most of us come from immigrant backgrounds. It’s about celebrating the cuisine and culture of American diversity. Sheila calls it ‘food without borders.’ We could use it, especially the way the world is now. There’s a surprise at the end of each episode, like the cheeseburger dosa. They never tell us, but they brought in a troop of Indian dancers for the end of that episode. There was a whole troop of people dancing in our living room. That’s the way I envision America.

What would you serve to our President to help him understand that concept?

Marilynn: Pastrami-ramen kugel as the main dish. It’s really good. And baklava milk tart for dessert. The baklava’s Greek, and the milk tart’s South African. And maybe a Mexican chocolate bread pudding made with pretzels and raspberry jam.