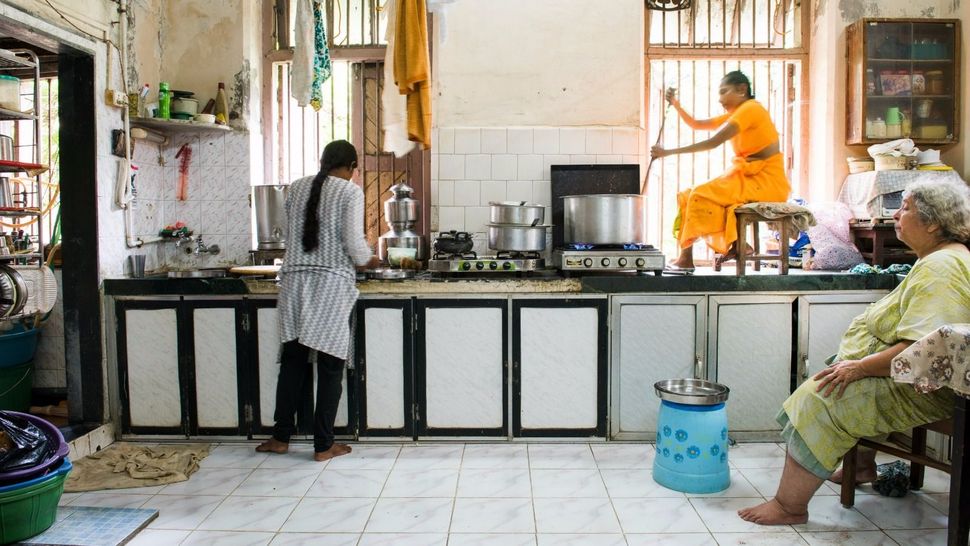 In the Mumbai kitchen of caterer Sharona Hayeems (right), helpers Sona (left) and Suneka assist in the halwa making. Image by Shulie Madnick 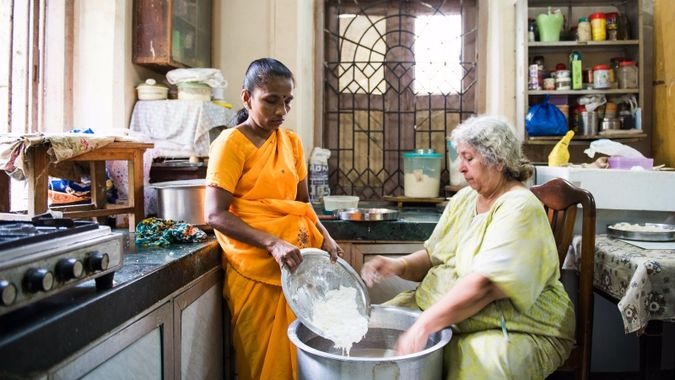 This is part one of a two-part series.

On the morning of [Rosh Hashanah](https://forward.com/schmooze/320610/rosh-hashana/ “Rosh Hashanah”) Eve 2016, I met Sharona Hayeems, a local Indian Jewish caterer, at her home in Dadar, a neighborhood in Mumbai where some of the remaining 4,500 Indian Jews in India still live. I was there to spend some time watching her cook for Rosh Hashanah.

I was introduced to Hayeems, a Bene Israel (Sons of Israel) Indian Jew, by the inimitable Elijah Jacob, the India executive director of the American Jewish Joint Distribution Committee (AJDC). Hayeems prepares kosher meals for Meals on Wheels, a program subsidized by the AJDC and Indian Joint Trust, which feeds the less fortunate in the Jewish community throughout the year, according to David Kumar, India AJDC welfare manager.

Sharona (who likes to be called Sharon) Hayeem’s family is originally from the Konkan coast, just south of Mumbai, where the Bene Israel community settled when they first washed ashore in India some 2000 years ago. In pursuit of work, the family found itself in Karachi, Pakistan, where Hayeems was born in 1947. The same year, during partition, is when both India and Pakistan gained independence from the British. Hayeems family moved to India, as many did after the partition, and settled in Kalka, Himachal Pradesh, a northern Indian state. In 1974, she got married in Mumbai and settled in Dadar, where she’s lived ever since.

At the door to Hayeems home, I was greeted by a star of David with the word Zion in its center and a mezuzah on the doorpost. My quiet moment, devoid of time and place, gazing at these universal Jewish symbols, was disrupted by the barks of Hayeems’ dog, Roger.

Bension, Hayeems’ husband, opened the door and I immediately got a glimpse of a dining room table full of large, round, shallow stainless steel platters called thalis. Each thali was full of halwa set to cool down. Throughout the day, community members would drop by to pick up their orders of halwa, a churned coconut milk custard, a specialty Bene Israel (Sons of Israel) food for Rosh Hashanah.

I reached the kitchen through an entryway where I found Sharona Hayeems and her longtime Hindu helper, Suneka, whom Hayeems fondly nicknamed, Rani (queen). Towels and light cotton housecoats were drying on clotheslines suspended mid-air in the kitchen, and soft, ethereal light streamed through the open windows. Hayeems hired another temporary set of hands for the High Holidays, a young woman Hayeems referred to as Sona (gold), who was in her late teens, maybe twenty. The trio was hard at work to keep up with the demand of this small yet vivacious Indian Jewish community. 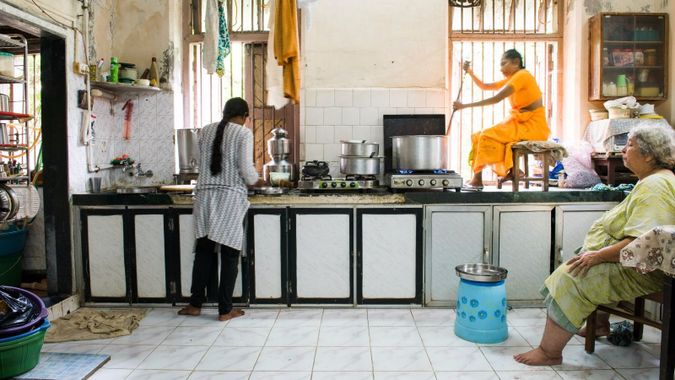 In the Mumbai kitchen of caterer Sharona Hayeems (right), helpers Sona (left) and Suneka assist in the halwa making. Image by Shulie Madnick

Suneka was skillfully shredding the flesh out of a halved coconut on an old-fashioned wooden contraption called a vili, a wooden board with an attached, curved, moveable (vertically up and down) steel arm with a round jagged blade at its edge.

The shredded coconut is soaked in water for several hours. It is then strained and “chick,” wheat gluten, is added along with China grass, also known as agar-agar, as thickeners. “Chick” is the original thickener used in halwa. In Israel today cornflour is used as a shortcut. Sugar and a vegetable oil substitute for ghee (for Kosher’s sake), called toop, India’s Crisco, is added. The mixture is then stirred in a massive industrial-size aluminum pot before being placed on the stovetop. Setting this massive pot on the stove, on medium heat, takes teamwork.

Suneka, was holding salt, maybe cloves in between her fingers. She motioned in circles above the halwa pot, which reminded me of “Kaparot,” and mumbled something. Hayeems explained it’s a blessing so the halwa won’t spoil. Warding off the evil eye with food is a tradition I am familiar with but didn’t I realize it’s done when cooking too.

In a split second, unexpectedly, petite Suneka, in her orange sari, leaps quickly onto the counter and props herself down on the wooden stool set there. She adds in the cardamon and begins to continuously churn the liquid with a paddle-shaped wooden spoon as long as a baseball bat. Hayeems adds in the pistachios and almonds. At her instructions, Suneka lowers the heat and carries on churning until the coconut milk mixture thickens. The halwa is then poured into lightly greased thalis, set to cool and gel at room temperature, and then refrigerated.

The chilled wiggly, jello-like halwa is then cut into diamond shapes and served for dessert or breakfast, but it’s really primarily a snack, to nibble on, in between Rosh Hashanah services. 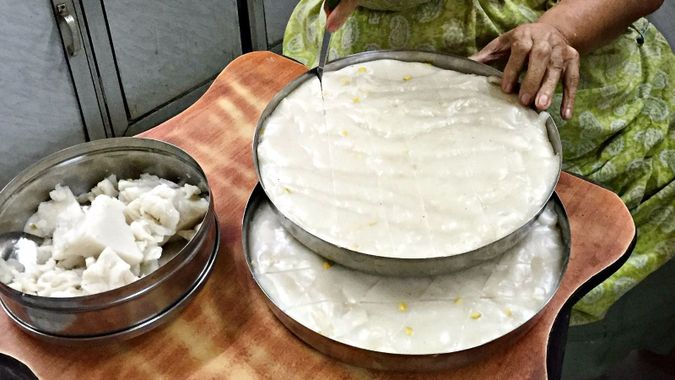 Time to cut the halwa. Image by Shulie Madnick

Midway through the halwa preparations, a messenger from “All Mumbai Dabbawala,” an iconic Mumbai tiffin service the AJDC teamed up with, drops by to pick up some stainless steel lunch box tiffins prepped in advance. From Sunday to Thursday, vegetarian meals are provided, and for Shabbat, on Fridays and Saturdays, non vegetarian meals are delivered to a modest number of needy families and some elderly folks in the community. The AJDC also provides holiday food assistance on Rosh Hashanah, Passover and Purim to over 100 people in addition to other sectarian and non-sectarian social welfare programs throughout the year.

Similar relief efforts are launched during the High Holidays by Sir Jacob Sassoon & Allied Trusts & Charities, which are managed by Mr. Solomon Sopher. Heavy parcels of food laden with legumes, beans, rice and other provisions were being distributed for the High Holidays when I inconspicuously dropped by Magen David Baghdadi synagogue (distinct with its clock tower), three days before Rosh Hashanah eve. During my brief visit, approximately 40 people were there, picking up packages. A volunteer from the Konkan coast, south of Mumbai, was bringing some provisions back from Mumbai to the Jewish families in the villages.

“The distribution of provisions and cash assistance to the needy and lesser fortunate members are taken place every month by our trust, led by me, helps all members who are in need,” responded Mr. Solomon F. Sopher, who also overlooks Magen David and Knesseth Eliyahoo synagogues in Mumbai and Ohel David synagogue in Pune, when I inquired about the charities’ High Holidays tzedaka efforts.

The evening of Rosh Hashanah I spent at the Knesseth Eliyahoo Baghdadi synagogue — which I’ve written about the food and enriching experience in “Chasing Challah in Mumbai.” I capped off the evening with some halwa that Hayeems generously insisted on sending with me back to the hotel, like any Jewish momma.