Why Gefilte Fish Is A Perfect Symbol For Sukkot 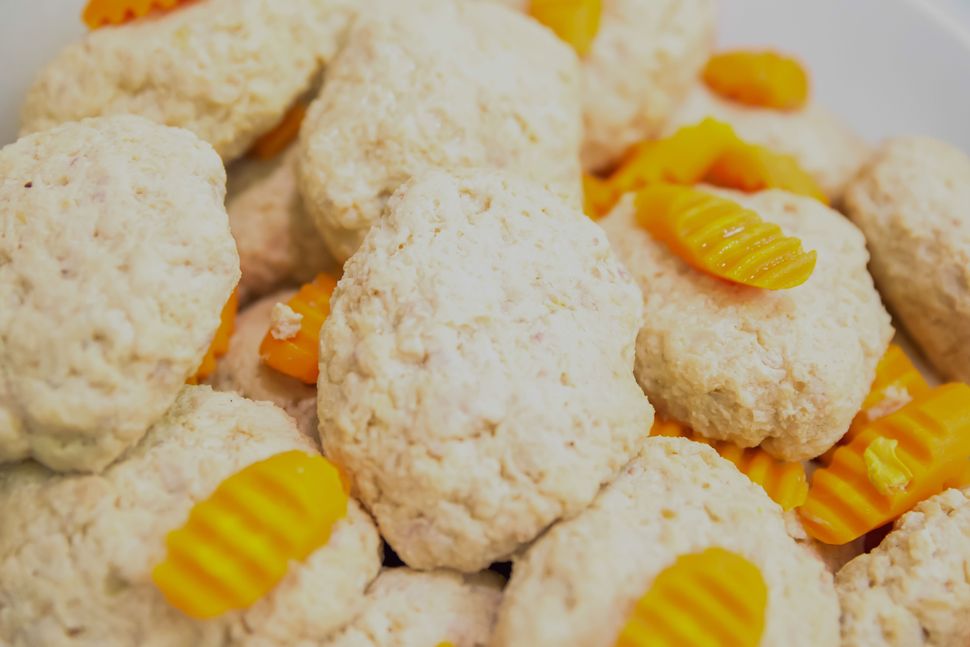 Every year on Sukkot, my great-grandmother made gefilte fish for the elders of the synagogue who “dwelled” in the sukkah for seven days.

To continue this mitzvah even after she left this world, she stipulated in her will that my grandmother take over her task. Anyone who has made gefilte (meaning filled or stuffed) fish from scratch knows it’s not the most pleasant job. At first, my grandmother, Nana, stewed to herself as she methodically went through the many steps: grinding the carp, whitefish and pike with a hand crank grinder, chopping it with a metal half-moon shaped chopper to just the right consistency in a wooden bowl, (both of which I still have), and then forming the mixture into oval patties. Eventually, though, Nana didn’t mind the chore. Everyone loved her gefilte fish. She served it as the first course at our Passover Seder, right after the hard boiled eggs.

I didn’t know my great-grandmother, Bubba Freed. From what I’ve learned, Anna Bernstein Freed was a self-determined, strong, no nonsense woman. Bubba and Zayda Freed and my mother’s family all lived together on Franklin Street in Philadelphia. Bubba always sat at the head of the table in both the literal and metaphoric sense. It is in this context that I have always been amused by the gefilte fish tale, which Nana shared with me over 30 years ago. But it has taken all these years to understand that there is much more to the story than my great-grandmother wielding her authority as matriarch.

Bubba Freed was a devout Jew, (she was always the first person at services at her shul, Ohel Jacob in North Philadelphia), who lived the value of hachnasat orchim, welcoming the stranger. Inspired by Abraham and Sarah inviting weary travelers out of the hot sun and into their tent, the commandment to be hospitable appears no less than 36 times in the Torah, more than any other. Sukkot is all about hospitality. There is a tradition of inviting seven exalted guests, one each night — known as ushpizin — into one’s sukkah, which reminds us of the mitzvah to welcome in friends and strangers or anyone in need of the bounty of our sukkah.

Asking Nana to carry on the gefilte fish tradition was a backhanded compliment. Her parents, Bubba and Zayda Cohen owned a Kosher restaurant, Cohen’s, first in Hazeltown, Pennsylvania then in Philadelphia. Bubba Cohen did all the cooking for dozens and dozens of people a day. Nana had been helping out in the restaurant since she was a little girl and was well versed in Ashkenazic Jewish cookery. So Bubba knew that despite the fact that she and Zayda had seven children, four of them daughters, it was my grandmother, her daughter-in-law, who would honor her wishes and get the job done. After all, no one should have to go hungry.

My mother’s home was the focal point for the extended family. There were never too many at the table. To feed everyone, they had a large kitchen with two refrigerators, a six-burner gas stove and a walk-in pantry where several pushkes hung on the inside of the door. A full pantry was inspiration for philanthropy. Besides welcoming the 25+ immediate family members and assorted guests on various occasions, other relatives visited (some staying a little too long). Also, once a month on a Sunday, Bubba Freed’s brother, Willie, and his family always managed to surprise them. Nana prepared a brisket for the immediate family on Sundays, but suddenly there were up to six more mouths to feed. As they walked through the front door, Nana shoved my mother out the back door. She ran to 7th Street to Mr. Gordon’s grocery where she bought more kasha and bowties to stretch the menu.

Bubba Freed was on the board of the Hebrew Orphanage that was around the corner from their home. At the height of The Depression, she “adopted” an orphaned brother and sister. She took care of their needs such as purchasing them school supplies, clothes, Chanukah gifts and more. In Exodus we are instructed not to cause pain to the widow or the orphan. The children were always welcomed into the family home for a visit and a meal.

Then there was the butcher, Cohen, who had a knack for showing up on Shabbos, just as the family was sitting down for dinner. He never sat. After all, he was only “stopping by.” He and Bubba Freed would get into a weekly battle Royale usually about the chicken he sold her. She would complain that he charged her too much for such a little chicken. He would say he needed to make a living and if she didn’t like it, she could go to the butcher, Dworkin instead. Now why would she do that when he had the best merchandise? Mr. Cohen had no family and he probably fancied Bubba, who at this point was a widow. (He also knew he was sure to get an exceptional meal at the Freed home.) No one in the family ever let on that if Mr. Cohen didn’t join them for Shabbos dinner, he’d be alone. He was always invited in too.

In the spirit of Sukkot, we are reminded more than ever to welcome all those in need of our hospitality. And if the tent begins to feel a little too gefilte (filled), it’s time to get a bigger tent.

_Barbara Lerman-Golomb is an author and social justice/eco-activist and experiential learning designer. She can also be found at Kveller, HuffPost, A Life in Many Small Parts and Twitter.

Why Gefilte Fish Is A Perfect Symbol For Sukkot