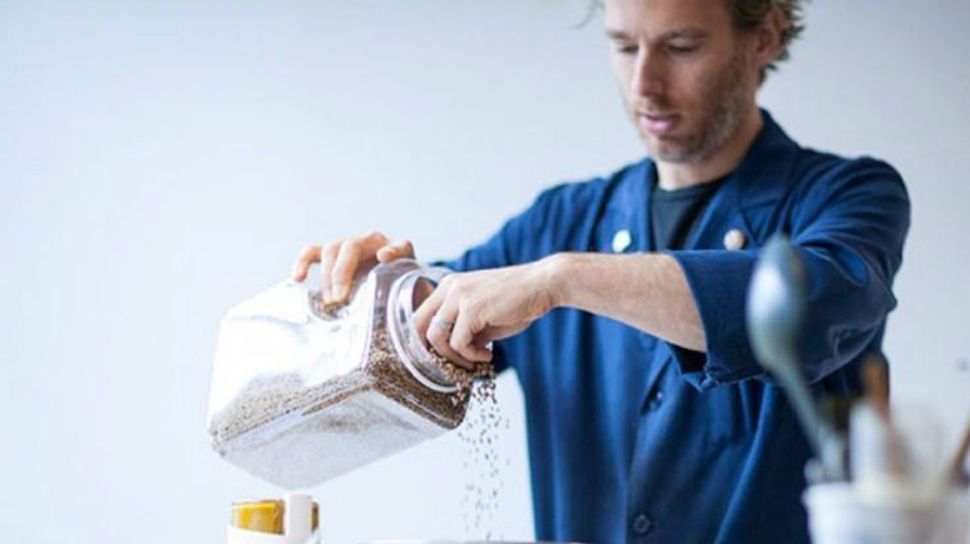 JTA — For many home cooks, spices are an afterthought, sprinkled on a dish lacking in flavor. Israeli-born, French-educated chef Lior Lev Sercarz wants to change that.

“If you want to make good food and beverages you need to know about spices, and I would like to help you know more about it, whether you’re a home cook, whether you’re a professional,” Sercarz, 45, said recently at La Boîte, his small spice and biscuit shop located in the Hell’s Kitchen neighborhood of Manhattan.

Since opening La Boîte in 2011, Sercarz has amassed some 50 clients, including restaurants, bakeries and breweries, as well as cheese, popcorn and chocolate makers. He has also published two books about spice blending and created a unique line of spices for Eataly, a chain of luxury Italian upscale indoor markets.

Now Sercarz, who grew up in a secular family on a kibbutz in the Israeli Galilee, but also lived in Belgium and Italy during his childhood, hopes to expand his work to his native country. He is working with the Jewish National Fund to create a culinary institute in the Galilee, with hopes of opening the first part of the program in two to three years.

“It’s an idea that was in my head for many years,” Sercarz said. “I always felt bad that young men and women in Israel or the region don’t necessarily have where to go to learn about cooking and the culinary studies. There are a few private schools now, which is great, but not at the scale that I would want it to be.”

At his shop, whose walls are lined with framed vials of the seeds, fruits, roots and bark from which spices are derived, Secarz offers 70 spice blends he has created for the restaurants and food-related businesses with which he works, as well as some 85 blends for the general public.

Spice blends include combinations such as desert rose (halva, sesame and rose petals), pierre poivre (which contains eight different peppers) and apollonia (cocoa, orange blossom and pepper). A small container of the single spices costs $9 to $30; blends go for $13 to $27 for a small container (around two ounces, depending on the spice).

“The idea of the blends is that they’re not meant for a particular dish or recipe,” he said. “We really want to have people play around with them, and what you use today for a savory preparation you can use [tomorrow] for a sweet preparation or a beverage, so one blend can really be a solution for hundreds of different recipes.”

Sercarz says his Israeli school, which will be located in the city of Kiryat Shemona, will be unique in that it won’t only offer cooking instruction. Sure, there will be instruction in breadmaking, cheesemaking, beer brewing and, of course, spice mixing. But students can also learn about a variety of food-related fields such as food science and technology, agriculture, and food writing and advertising.

“There isn’t anything like that that exists in the world. We’re really aiming to be a very unique place,” Sercarz said.

Israel’s Bishulim and Danon culinary schools, both of which offer professional cooking and pastry classes, and the Culinary Institute of Israel, which offers study abroad programs for cooking, are among the current options available in Israel.

Sercarz’s school will focus on the direct connection between agriculture and cooking, JNF Communications Director Adam Brill said in an email. JNF is currently assessing the funding needs for the school, he said.

“This one-of-a-kind academy will allow students to learn directly from the farmers and growers who produce the ingredients they cook with. Unlike most schools where students encounter those ingredients for the first time in the kitchen, at the academy, classes can take place out in the fields where they are grown,” Brill said.

Sercarz knows a thing or two about cooking. He earned a degree from at the Paul Bocuse Institute in Lyon, France, whose founder is a heavyweight in the nouvelle cuisine cooking method. He later relocated to New York, where he worked with the famed chef Daniel Boulud at his flagship restaurant, Daniel.

But after six years at Daniel, Sercarz wanted to change directions. He started experimenting at home with spices and cookie baking, earning him praise from friends. In 2011, after three years of working with spices at home while maintaining a gig at a corporate dining hall, he decided to pursue his passion full-time, opening La Boîte.

Sercarz, who lives on the Upper West Side, also sells cookies, which he flavors with nuts, chocolate, dried fruits and, naturally, spices. An eight-ounce box sells for $65.

He draws inspiration from Jewish and Israeli cuisine, as well as his own family background. Sercarz is three-quarters Ashkenazi, but jokes that “luckily” he has a Tunisian grandfather. His grandmother would incorporate the flavor of her husband’s country into her European cooking.

“You’d find the mamaliga, the Eastern European version of the Italian [polenta], with harissa in it, so a very interesting mixture of cuisines, which worked great,” he recalled.

Sercarz says cooks shouldn’t be afraid to mix spices from different cuisines, like his grandmother.

“I think the fact that you weren’t born in India doesn’t mean that you cannot do [cooking with Indian] spices — you should,” he said. “So you could make a meatloaf or an eggplant parmesan and add seasoning from there. I don’t think you’re insulting anybody.