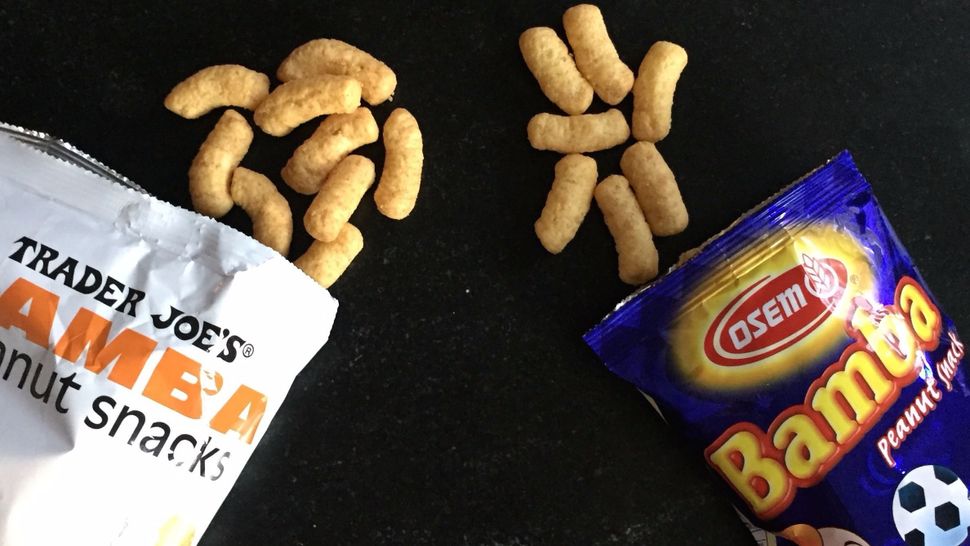 News broke recently that discount and prepared-food emporium Trader Joe’s is now carrying Bamba, Israel’s most iconic snack food. There was so much excitement across the internet about the news that I envisioned my local Trader Joe’s having to add a weekday bouncer. (Yes, they often have a weekend bouncer. Yes, this is Brooklyn.)

For the unfamiliar, I always like to describe Bamba as Cheetos, but in place of a neon cheese-like powder on the exterior, the puffs are coated in a peanut butter powder. The result is a snack that’s just a little sweet and just a touch salty that manages to be crunchy and melt on your tongue at the same time. It’s an addictive combination that inspires fanaticism.

As a Bamba fiend myself, I was suspicious at first. Could this new Bamba be as good as the original? Would something be missing, or get lost in translation? Was this product a clever facsimile of the Israeli version, or some kind of rip-off? I set out to investigate.

A sign at my local Trader Joe’s explains: “We private label lots of brand name items, minus the artificials & preservatives.” But Trader Joe’s is known for keeping the names of the producers it uses under tight wraps. The company’s public relations director, Kenya Friend-Daniel, told JTA shortly after the news broke that “We don’t share information about our suppliers.”

All Trader Joe’s would say about the product on the company website was: “Made for us in Israel, where Bamba is far and away the best-selling snack in the country, Trader Joe’s Bamba Peanut Snacks contain just four simple ingredients: corn grits, peanut paste, palm oil and salt.”

That wasn’t enough to satisfy my curiosity — or an editor’s question about any possibility of trademark infringement. It was time for some rigorous testing.

First let me explain a bit about why anyone could ever care enough about a snack food to warrant this type of inquiry. My love affair with Bamba is more than 20 years old. We were first introduced on my inaugural trip to Israel when I was eight. To an 8-year-old, Bamba — and frankly almost the entire snack foods aisle in Israel — is a gold mine. Bamba is somewhere between dessert and after-school snack, and it’s just as addictive eaten straight out of the bag of a freezing cold grocery store as it is after sitting in the back of a Jeep your parents decided to hire to drive around in the Negev sun. I was hooked.

Over the next few years, Bamba would show up in my life at Jewish summer camp, likely brought by Israeli staffers as both a taste of home for themselves and a treat to share with the unfortunate Americans who were raised without Bamba. In Israel, the idea of living without Bamba is hard to fathom. The snack is so popular that Osem, which makes it, estimates that Israelis go through 10 million bags of the snack every month, Tablet reported earlier this year.

The snack is inescapable in Israel, as I discovered when I lived there in my early 20s. Its shiny blue packaging, with a cartoon baby in a diaper on the cover, greets you at every grocery store, gas station, dumpy kiosk at central bus stations and 20-something’s house party. One friend fell so hard for the snack that he took to periodically say BAMBA, as if it were a catch phrase meant to convey enthusiasm both for the snack and whatever situation we were in.

Back in the U.S., when I found Bamba in a kosher supermarket or a Middle Eastern shop, I always felt a connection with the cashier or store owner. Only someone who had spent time in Israel would stock this. The shiny bags felt like a secret handshake, imbued with more meaning than any packaged puffed-corn product logically should be.

So, the stakes for the Bamba at TJ’s were high. I headed to the store (where there were no bouncers on a quiet Wednesday) and bought a bag, decorated not with the Bamba baby, but with two elephants, for 99 cents. Then I headed across the street to Shelsky’s, where the original product is sold. I picked up a smaller bag for $2 and went home. I opened the bags and could barely restrain myself from abandoning my assignment and simply diving in, grabbing as many puffs as possible.

No, first things first, I told myself: Compare the nutritional facts. Do they line up? Almost. The Osem Bamba clocked in at just a touch higher in fat percentage.

Next up, I compared the puffs. While each Bamba puff is a bit like a snowflake — no two are exactly the same — the size and shape of the puffs in the two packages were roughly the same. Finally, the real deal: the taste. I tasted more puffs than I cared to count — the things we do in the name of research — comparing, contrasting and drinking water between to give my palate a break. At first, the TJ’s Bamba tasted just a touch saltier, but that sensation faded. I was as sure as I could be from my tasting that the TJ’s Bamba was the real McCoy — but I was determined to get that on the record.

After many emails to the PR team of Nestle, Osem’s parent company, a spokesperson wrote back to say: “This Bamba is indeed made by the factory in Israel.” A day later, Trader Joe’s broke with their tradition of secrecy, telling Eater: “We were aware of the popularity of the product and the fact that it was difficult to find in the U.S. We wanted to make this popular snack available to our customers and give them the chance to enjoy it. Part of that is making it recognizable to them.”

With something gained, there’s often something lost. In this case, I’ve lost the feeling that comes from turning the corner in a store and being surprised to happen upon that shiny blue package. I’ve lost that secret handshake. But, if it means that there is now more Bamba to share, to bring on picnics, to stock a house party with, or to snack on during a road trip, I’ll settle for that.