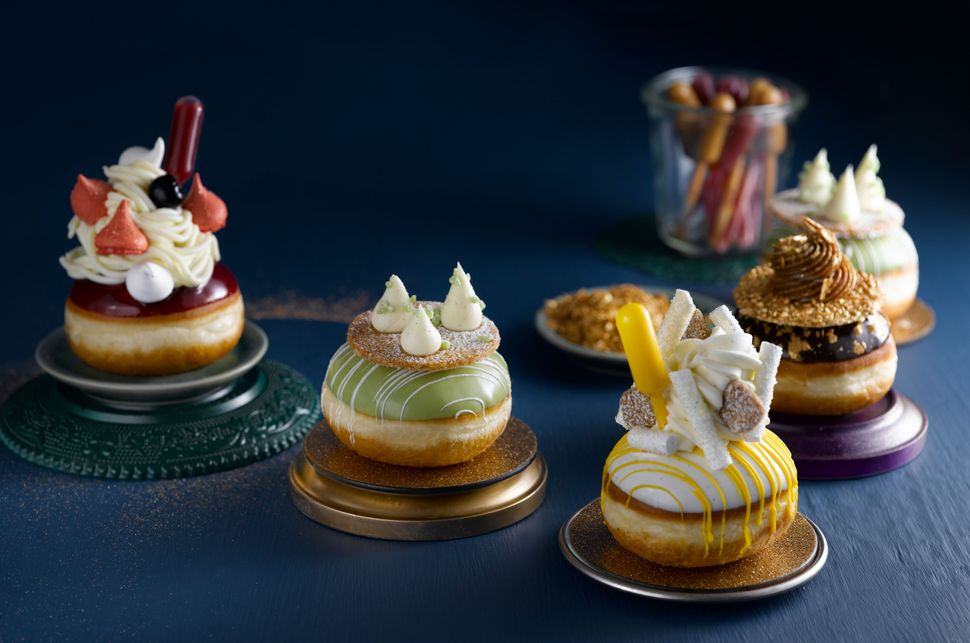 A part of Roladin’s 2017 collection, some of these doughnuts come with ‘chasers’ — syringes filled with different flavors. Image by Ronen Mangan and Roladin

Click on the green model below to see a spectacular slideshow.

The doughnut evolution was undeniable when the “chaser doughnuts” gimmick swept the Israeli market. Chasers are syringes filled with flavored creams and coulis that are stuck into the doughnuts. This year’s chaser doughnuts include a raspberry coulis chaser in the cheesecake strawberry doughnut at Tatti (just outside Tel Aviv), a tropical chaser in a cheesecake doughnut and a caramel filled syringe in the ‘Pecan-iliya’ doughnut at Roladin.

Roladin, a leading bakery with multiple locations throughout Israel, launched a mega media campaign with billboards plastered all over the country with images of models displaying doughnuts. The models wear elaborate costumes and high-fashion makeup — in green for the “Green Queen,” a pistachio cream doughnut with white chocolate, and in red for the classic strawberry one. In November, Roladin previewed its new doughnut collection and gave away free doughnuts for one day at its Ibn Gvirol, Tel Aviv location.

A “Cotton Candy” cronut is a part of The Showroom Bakehouse’s “Luna Park”-themed doughnut collection. It pays a very pleasing homage to New York’s Dominique Ansel’s cronut, with pink strawberry vanilla mascarpone and blue cotton candy on top. The Showroom Bakehouse has a storefront by Rabin Square and a Hanukkah pop-up at Sarona Market in Tel Aviv.

Last year, Biscotti (just outside Tel Aviv) launched a doughnut collection inspired by childhood flavors. One of its highlight was the “Bamba” doughnut. Bamba, a quintessential Israeli peanut snack, is now sold at Traders Joe’s and soon enough will be a household staple in American homes too. This year the peanut theme carries over in the pretzel, or begale as Israelis call it: a doughnut with caramel, and glazed with peanut butter ganache which is a part of Biscotti’s 2017 crunchy themed doughnut collection.

A 300 NIS ($28) doughnut glazed in 24-karat edible gold at Dudu Automezgin Patisserie (multiple locations) is clearly controversial. Gold stock exchange rates aside, it was neither aesthetically pleasing nor refined. YOLO GOLD, a Roladin doughnut, inspired by a chocolate pudding snack by the same name, is a chocolate, hazelnuts and praline doughnut with touches of mini gold leaves, selling for 11 NIS (a little over $3).

There was even a call on social media for participants in a country-fair-hot-dog-eating-like contest, only with doughnuts. But for those who are sentimental, it takes only one classic Israeli jelly doughnut to satisfy the soul.