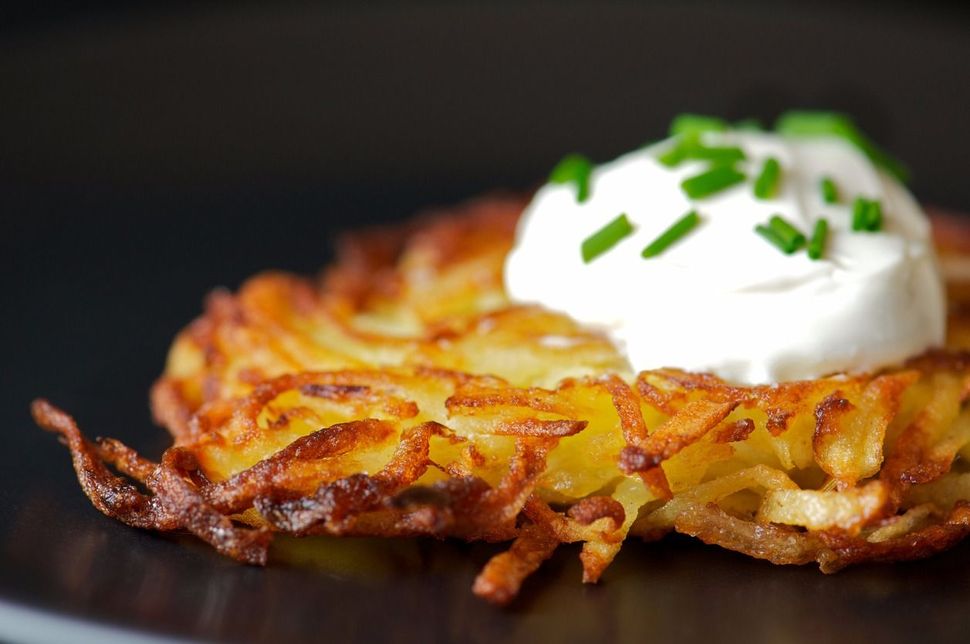 Sour cream vs. apple sauce? For one family, the choice is obvious. Image by iStock

When it comes to latkes, we are a sour cream family. In fact, my mother thinks sour cream goes with everything. Not that there’s anything wrong with applesauce. But sour cream, or smetana in Russian, is in our DNA as one of the key ingredients in Russian cuisine.

So this year, I’d like to take the focus off the latkes and give a little more attention to the sour cream. Not as commonly associated with Hanukkah as foods with oil, are dairy products. Yes, Hanukkah is yet another Jewish holiday where dairy is symbolic. According to a story that predates the Maccabee’s revolt, the celebrated Jewish heroine Judith saved her village from an invading Assyrian army by getting the Assyrian general, Holofernes, drunk on wine accompanied by salty cheese. (Possibly the first wine and cheese party!) Once he was passed out, Judith beheaded him with his own sword. The Israelites then launched a surprise attack on the Assyrian army and won. In honor of the salty cheese that aided in the victory, we indulge in dairy.

While sour cream is delicious on latkes, it’s especially tasty with sweet foods. Sweet and sour is of course a winning combination. I grew up snacking on bananas and sour cream; herring is enhanced when it’s swimming in sweet white wine; and a dollop of sour cream on my nana’s famous sweet kugel is divine. Then there’s Jewish apple cake, which my family referred to as sour cream cake, with its delicate ribbon of cinnamon and sugar throughout. It was one of my nana’s specialties. In fact, it played a little part in local Philadelphia politics. My grandfather, M. Phillip Freed, was a Democratic Party leader and judge in Philadelphia. He and my grandmother, Myne Freed, both served as leaders of the Democratic 20th Ward. In the 1930s, the discrimination and inactivity of the Republican Party and the popularity of FDR’s New Deal programs inspired a liberal multiethnic coalition to form made up of Italians, Jews, African Americans and Irish. The chair of the Philadelphia County Democratic Party at the time, John B. Kelly, who was the actress Grace Kelly’s dad, relied on my grandfather to help turn traditionally Republican areas of Philadelphia to Democratic Party blue, including Kelly’s own blue blood Main Line Philadelphia. Strategy meetings were held at my grandparents’ home. It was probably the first time any of the members of this multiethnic coalition were in a Jewish home. While they came for my grandfather’s political savvy, they came back for my grandmother’s sour cream cake!

There’s more to sour cream than its deliciousness. As a fermented product, it has the potential to contain gut-healthy probiotics, which are live bacteria and yeasts that can aid in digestion and help strengthen our immune system. Sour cream is created by fermenting regular cream with certain kinds of lactic acid bacteria. The bacterial culture sours and thickens the cream. The proper balance of bacteria and digestive enzymes can help us absorb more of the nutrients in the foods we eat. Because the bacteria many manufacturers use die off during processing, not all sour cream varieties contain probiotics. To counter this, some companies add live cultures towards the end of the process, which remain active and beneficial to our health.

Hanukkah, ​li​​ke sour cream​ with its live cultures​, ​​is a reminder of why it’s essential to keep Jewish culture alive and active!

Barbara Lerman-Golomb is an author, social justice/eco-activist and experiential learning designer. She can also be found at HuffPost, A Life in Many Small Parts and Twitter.