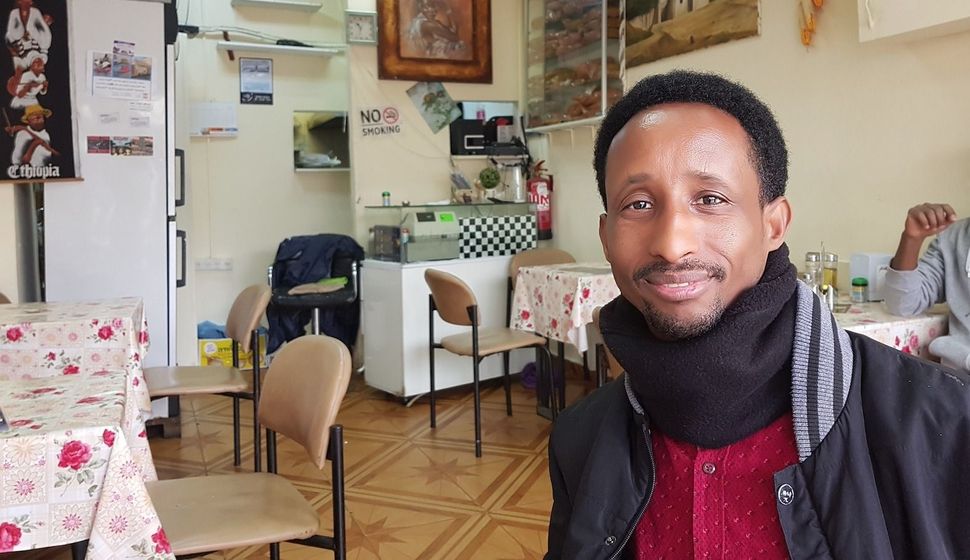 Hagos Medhane runs one of a dozen or more little Eritrean restaurants on the main drag that connects the new and old central bus stations in South Tel Aviv. Image by Ilan Ben Zion

Anwar Mohamed beams as he sets down a yellow-and-white speckled plate of ful, stewed fava beans redolent of hard-boiled egg and salty cheese — and reminiscent of simpler times. The heaping plate, from a Sudanese eatery near Tel Aviv’s old central bus station, is a working man’s breakfast at a working man’s price, a rarity in this increasingly pricey food-obsessed city.

The “Sudaness Reastaurant” [sic] offers an authentic slice of East African cuisine in the heart of the Jewish state, but spots like these that cater to the tens of thousands of Africans who came to Israel in recent years may soon be a thing of the past.

offers an authentic taste of East African cuisine, including this plate of ful.” photo-credit=”Image by Ilan Ben Zion” src=”https://images.forwardcdn.com/image/675x/center/images/cropped/sudanese-ful-1516213569.jpg”]

The neighborhood surrounding south Tel Aviv’s New Central Bus Station — the concrete behemoth that dominates the urban landscape — has transformed in recent years into a multiethnic and multilingual culinary melting pot unattested to outside the country. The main pedestrian boulevard, Neve Shaanan Street, is home to dozens of eateries catering to the tastes of south Tel Aviv’s latest arrivals: Filipinos, Chinese, Indians, Sudanese, Eritreans and Russians. Most of these places are not frequented by Israelis. 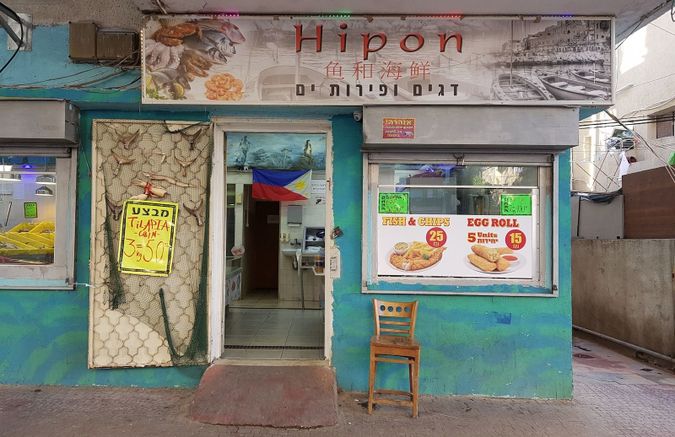 Hipon restaurant caters to migrant workers from the Philippines, among other diners. Image by Ilan Ben Zion

An Israeli government plan to boot African migrants and asylum seekers threatens the lives and welfare of tens of thousands of people. It will also alter the face of the neighborhood and extinguish the unique food culture that’s grown up within it.

Israeli authorities approved a plan earlier this month to start deporting the roughly 40,000 African asylum seekers and migrants who arrived in Israel over the past decade, mostly from Sudan and Eritrea. Under the plan, temporary visas issued to Africans would cease to be renewed. Those who leave willingly will be offered an exit grant of $3,500 to return to their country of origin or to Uganda or Rwanda by April. Those who remain past the deadline face jail, and reduced stipends when they leave the country. Their employers will face fines.

“[They] have a clear choice — cooperate with us and leave voluntarily, respectably, humanely and legally, or we will have to use other tools at our disposal, which are also according to law,” Prime Minister Benjamin Netanyahu said at a cabinet meeting. “I hope that they will choose to cooperate with us.”

The prime minister said he visited south Tel Aviv, a formerly working class Jewish neighborhood of the city that has become a haven for Eritrean and Sudanese asylum seekers in the past decade, as well as migrant workers from the Philippines, Sri Lanka and India, China and the former Soviet Union. When African migrants began crossing Israel’s southern border with Egypt in significant numbers in 2012, Israeli authorities would shuttle them by bus to south Tel Aviv, where they faced poor socio-economic conditions, scant welfare and healthcare.

A vast majority of the African migrants still call the neighborhood around the central bus station home, and like so many new immigrants, the newcomers brought their food ways and opened dozens of eateries. The Om and Super Dragon markets offer ingredients familiar to East and South Asian kitchens — spices and noodles, jarred chutneys, fish sauces and tamarind paste — and fish mongers, butchers and greengrocers cater to the cuisines of foreign workers by stocking produce less familiar to Israeli shelves: taro and cassava, plantains, shellfish and pork.

By far the most abundant, however, are brightly lit and decorated Eritrean and Sudanese restaurants dotting Neve Shaanan and its side streets. 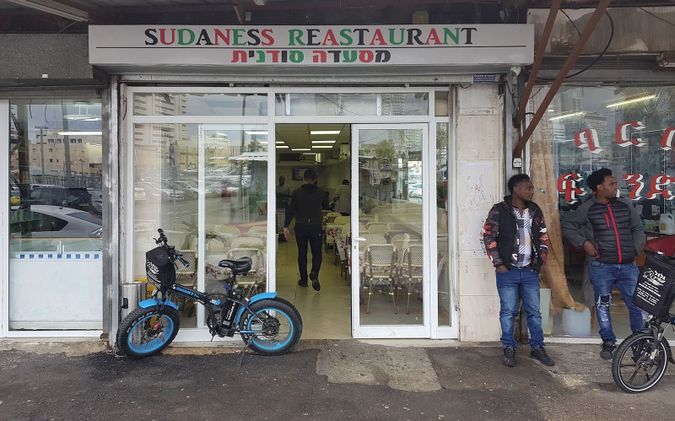 One of the Sudanese eateries in South Tel Aviv by the old central bus station. Image by Ilan Ben Zion

Anwar Mohamed, a soft-spoken waiter and cook at the Sudanese restaurant, said its clientele includes Sudanese, Eritreans, tourists and some Israelis as well. Eritrean news television plays on a flat screen in the back while a handful of customers scarf down plates of ful. The dish on offer is typically Sudanese: fava beans cooked until they disintegrate. But unlike its Levantine counterpart, it’s not served atop hummus. Instead, tomatoes are mixed into the beans, then the brown mess is topped with grated egg and salty cheese.

Mohamed said he learned to cook at home and in restaurants in Sudan’s war-wracked Darfur region before coming to Israel. He worked in the service industry in Eilat before making his way to Tel Aviv. The owner is a Sudanese man with documentation, and Mohamed has worked there for a couple years. Mohamed said he’s concerned because he has a visa that expires every two months.

“For me, personally, what I would prefer is to get my visa renewed. Right now I’m on unstable ground,” Mohamed said. “Everybody here hears what’s happening and reads in the newspaper. How can you have stability like that?” Other members of the community are more reluctant to chat. At another unnamed Sudanese restaurant a block away, the aroma wafts onto the sidewalk from a kitchen crowded with simmering pots. What the Sudanese owner Adam lacks in conversation he makes up for with cuisine, dodging questions as he heaps bits of lamb ribs into a bowl alongside okra in tomato sauce and a mound of rice. A fiery chili sauce — one that burns the tongue but leaves the sinuses unimpaired — and sliced vegetables accompany the main dishes. 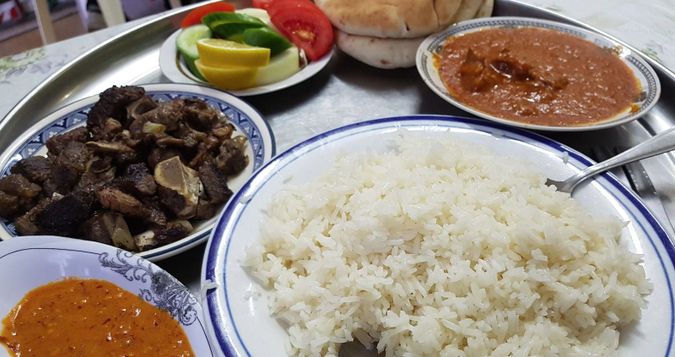 Eritrean restaurants abound along Neve Shaanan, their storefronts immediately identifiable by the dancing Ge’ez letters on their signs and east African beats emanating from within. Hagos Medhane runs one of a dozen or more hole-in-the-wall Eritrean restaurants on the main drag that connects the new and old central bus stations.

Like many Eritreans, he fled the oppressive dictatorship in his east African homeland and came to Israel in 2008. After nine and a half years, he has two children and manages Tedros, a restaurant serving traditional food from his homeland: injera flatbread (known in his native tongue Tigrinya as taita), served with mounds of stewed meat and curried lentils or beans.

As Israel has taken more strident steps to deport Africans, he said the neighborhood has gradually emptied and its fortunes suffered. Israel’s construction of a barrier along its border with Egypt has stemmed the flow of Africans entering the country in search of economic opportunity and freedom from oppression. In 2017, no African migrants entered the country, and since 2013 at least 4,000 have left voluntarily.

“This entire street, all year round in 2011, ’12, ’13, ’14, it was packed with people. Now there’s nothing,” Medhane said. Business is suffering as a result, he said, and will only suffer further as more and more Africans leave. “I have some Israeli clients, but not like the Eritreans. Without them, business will be weak.”

For now, Medhane said, he doesn’t think the new Israeli regulations will affect him and his kids, “but in Israel, you never can tell.” He acknowledges, however, that the new policy has added stress to already difficult circumstances for Africans like him living in Israel.

Some day he hopes to return to a democratic Eritrea, but for now he wants to remain in Israel with some semblance of security.

“What will be tomorrow? We’ll see,” Medhane said.