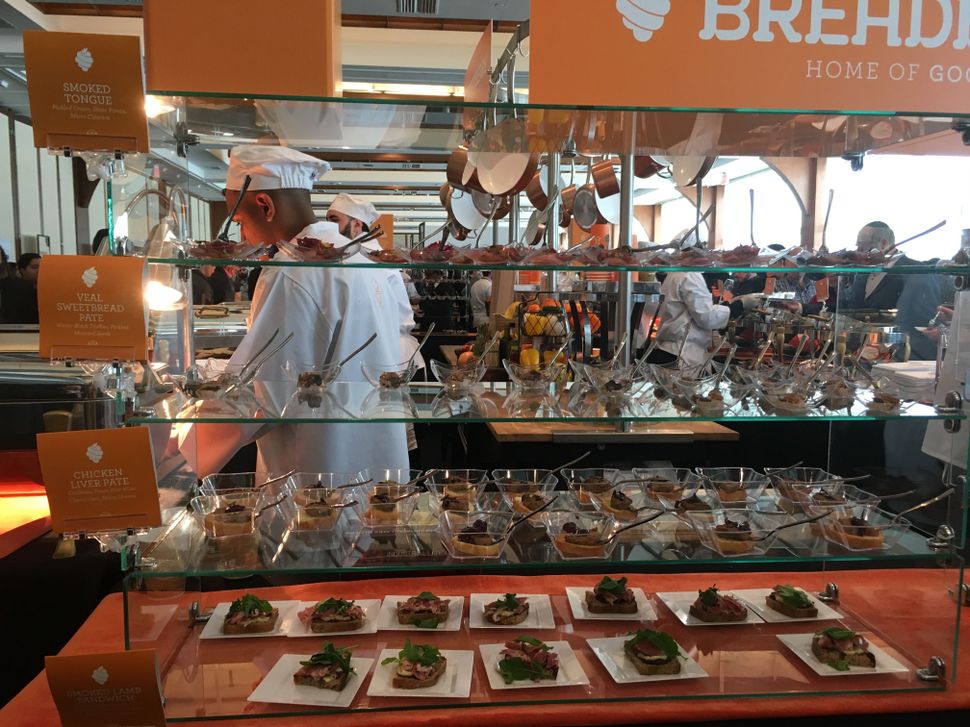 It’s 12PM on a Monday, and there are 250 kosher wines to try and piles and piles of kosher meat to consume.

Chelsea Piers is crowded with religious Jews, reporters, retailers and waiters that are beginning to sweat, sizing up the thirsty crowd. We’re all here to eat, drink and make merry. It’s the twelfth annual Kosher Food and Wine Experience,, sponsored by the Royal Wine Corporation, after all. 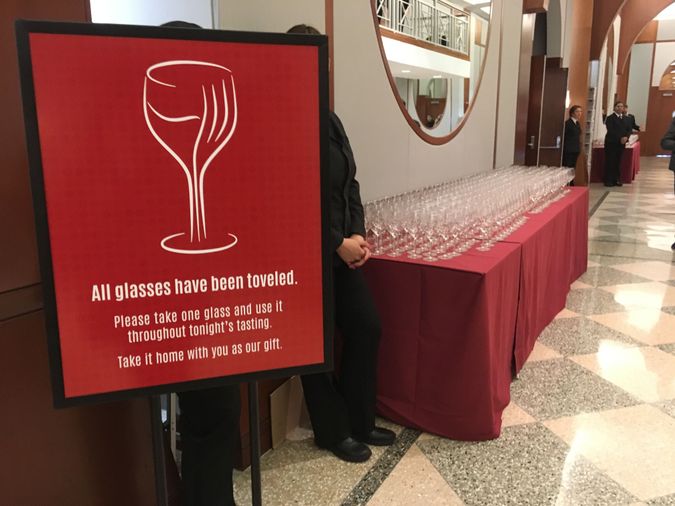 I take my complimentary wine glass (“All glasses have been toveled!” a nearby sign announces) and try to get my bearings. I make a beeline over to the far end of the room where the food is contained. The event is 80% booze and 20% food because “that’s where the money is,” says a fellow reporter. Nevertheless, I begin to feast. 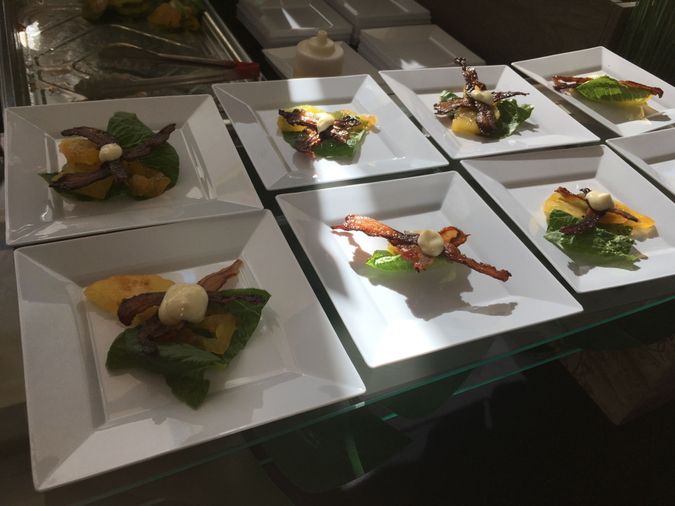 It wouldn’t be a Jewish event without some form of bacon or pepperoni or ham substitution. One might think us Jews were getting a little too comfortable in our skin if we weren’t constantly striving for the platonic ideal of the kosher equivalent of a cheeseburger. This year I find it at Great Falls Bistro, a high end restaurant operating out of the no man’s land of Passaic, New Jersey. “It’s worth the shlep out,” the woman next to me announces, smacking her lips with gusto. Indeed, their lamb bacon is worth the trip. Fried to a generous, smoky crisp, tasting unexpectedly like the real thing, these thin crisps rest atop a slice of pepper and lettuce (a much needed palate cleanser after the onslaught of artery clogging oil). Chef Yiftach tells me that the secret ingredient is “love.” Thanks, Chef Yiftach.

The Irish Beef Stew did not photograph well, but rest assured that Silver Leaf Caterers offered a selection of rich tasting Irish food. In a room full of cholent and deli meats and bacon substitutes, the Irish beef stew stood out. It reminded me of something that might revitalize a traveler in a tavern after seven days and nights of granola bars and energy drinks. 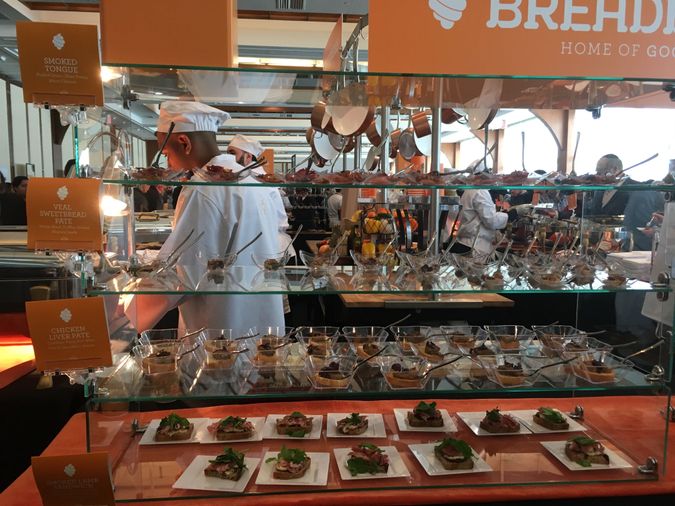 “Every year they have one flagship table,” mutters one guest to another in a not completely neutral tone. “I guess this year’s is Breadberry.” I follow their eyes to the Breadberry table, which is indeed the largest, most polished table of all. Breadberry is a kosher market and caterer, operating out of Brooklyn, but at KFWE 2018, they are the star of the show. The tongue atop a bed of pickled onions is the undoubted showstopper of the event, although I can’t help but notice that there are a whole lot of pickled things at KFWE. Jews have had a long love affair with the pickle but now it seems like that love affair has expanded to pickling things in general. Pickling is the process of extending the lifespan of food by either fermenting it in brine or immersing it in vinegar. They did it a lot in the shtetls, to make the meager amounts of food that they had last longer, and they’re about to start doing it again in high end restaurants. 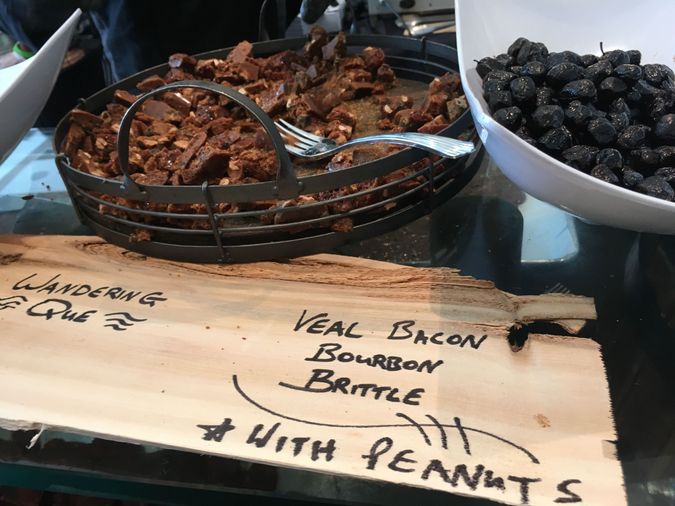 The Wandering Que was a magnet for disgruntled suit-wearing men, with its highly masculine wood carving station and its expansive selection of cooked, cured and ravishing meats. The veal bacon bourbon crumbs they served were dizzying, smoky and thick and unexpected. They also offered a pepperoni substitute, thinly sliced and strongly spiced. Sausages dangled from the ceiling, reminding the entire room that carnivorism is the human way. Be prepared — 2018 is going to be full of sausages.

I’m a simple girl, with simple, unassuming tastes, so of course it was Breadberry’s chicken liver pate that I kept coming back to. This dish was served on a toasted crust of ciabatta bread, topped by a sprig of what they called microgreens, which are the shoots of salad vegetables picked right after the first leaves have grown. Served with a dollop of piquant wine cherry jam, this chicken liver pate was a revelation. It revealed to me that expensive food would certainly be a kosher food trend in 2018, something I had suspected all along.