The Secret Jewish History Of Pancakes 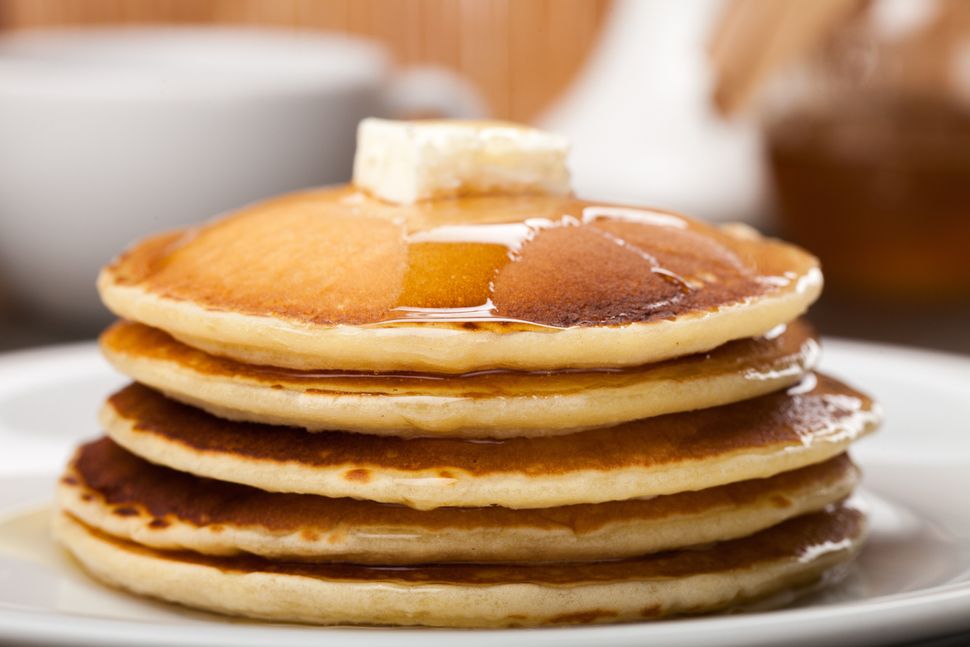 The pancake is an ancient, primal delicacy that has traversed the globe and inserted itself into many a culture, from Danish to Roman to Jewish. When we speak of Jewish pancakes, as we are compelled to on this National Pancake Day of wonders, we speak of latkes, that iconic Ashkenazi innovation. Latkes are potato pancakes, shallow-fried in oil, made of grated or ground potato (how to properly handle the ingredient is the stuff of great Judaica controversy), flour, egg and seasonings like garlic and salt (if you’re not a latke purist.)

These potato pancakes with their peasant pedigree are a holiday staple on Hanukkah, the festival of lights. Jews everywhere enjoy foods fried in oil on Hanukkah, to commemorate the miracle of the original Hanukkah menorah being lit with oil that lasted for eight days and nights.

Jews who wanted to observe the tradition did it with the foods of whichever country they happened to be in. Eastern European Jews, living in villages and shtetls scattered across Russia and Poland, used potatoes fried in oil to celebrate. Potatoes were cheap and plentiful, able to be stored down in the old root cellar for weeks at a time. They were grated and fried into little patties by enterprising kitchen balabustas. When there wasn’t oil, they were fried in schmaltz, which was chicken, duck or goose fat, an artery exploding trend that has since fallen out of style. Upper class Germans tended to view potatoes as poor people’s food, and stuck to whole wheat flour pancakes.

Pancakes, that ubiquitous cousin to cakes, waffles, doughnuts and muffins, is the food of the Jews who were once poor, who were once strangers in a strange land, who were once, like everyone else in the world, prone to devouring oodles of gut-busting treats as a substitute for emotional love and personal validation.

When we speak of the Jewish history of pancakes, we must never forget blintzes. Hungarian in origin, this Shavuot repast is essentially pancakes stuffed with every kind of filling our woefully small human minds can conceive of. Strawberry jam, chocolate, cottage cheese and the always repulsive poppyseed fill these treats. Shavuot is a holiday where Jews enjoy dairy food and boy, do we Jews go all out for it.

Then there’s vermesel, which the indispensable Encyclopedia of Jewish Food taught me was fried strips of dough in honey that Franco-German rabbis enjoyed starting off a Shabbat meal with, and chremsel, plain Passover pancakes made with Matza meal.

There’s atayef, of Arabic origin, which is a thin, folded pancake filled with ground nuts or soft cheese, which became popular among Middle Eastern Jews.

There’s blini, the Slavic Jewish answer to pancakes, crepes made with buckwheat flour (there’s a classic Russian saying, “the first blin is always a lump.”)

The Yiddish language contains multiple words for pancakes, perhaps an indicator of just how important the food is: fasputches, grimsel, placki, pontshkes, razelach and pfannkuchen. Modern Hebrew and traditional Hebrew both refer to pancakes as levivot, possibly originating from ‘lev,’ meaning heart, because pancakes are near and dear to everyone’s hearts.

The Secret Jewish History Of Pancakes