McDonald’s Surrenders To The Magic Of Bagels 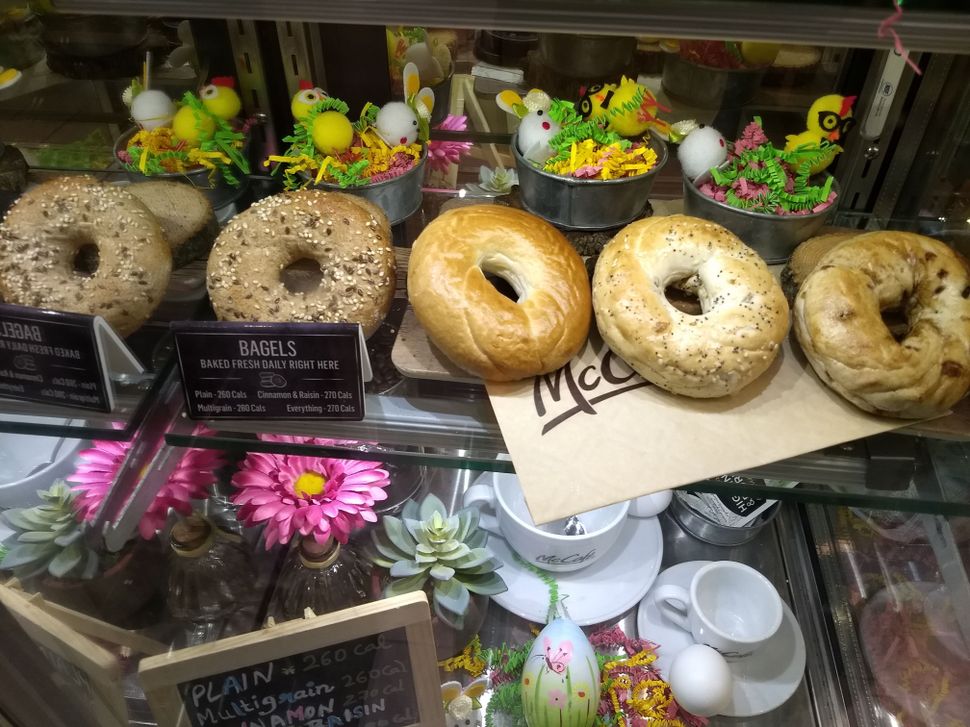 To much fanfare north of the border, bagels made their debut at McDonald’s locations across Canada this week.

The new breakfast offering “aligns with Canadians’ love of bagels”, the company crowed in a press release. It’s also the company’s latest attempt to capture more of the booming breakfast market – the fastest-growing category for quick-service restaurants, according to market research.

As someone who grew up on Montreal bagels, I felt it my journalistic duty to test-drive a McDonald’s bagel for the Forward’s audience of bagel connoisseurs.

The bagels come in plain, multigrain, cinnamon/raisin, and everything — except in Quebec, where sesame seed is subbing for everything “due to consumer insights on local preferences”.

After what sounds like eons of testing and research, how would McDonald’s vaunted bagel stand up to legendary varieties at bakeries like St.-Viateur and Fairmount? Would Canada have a new contender in the bagel wars?

At a downtown Toronto McCafé, I ordered a plain bagel with cream cheese; other spread options included herb cream cheese and regular butter. After about seven minutes, a cheerful cashier handed me a neatly folded brown paper bag, warm from the just-toasted bagel.

The McDonald’s bagel isn’t New York or Montreal. It isn’t even Pittsburgh or Saskatoon. It’s a sponge-like, flavor-free, tooth-challenging object closer to a Nerf ball than to any kind of baked good. Processed-tasting cream cheese provides the only hint of taste or texture. I made it halfway, then gave up. Hoping to interview another bagel consumer, I hung out for 20 minutes, eavesdropping on orders. No takers for bagels.

McDonald’s PR people didn’t return the Forward’s request for comment. I felt like reaching out to George Cohon, the Canadian-Jewish entrepreneur who launched McDonald’s in Canada to ask, “What is this shande?”

Maybe someday the company will start reselling bagels from people who really know how to make them. In the meantime, stick with the coffee and buy your baked goods elsewhere.

McDonald’s Surrenders To The Magic Of Bagels