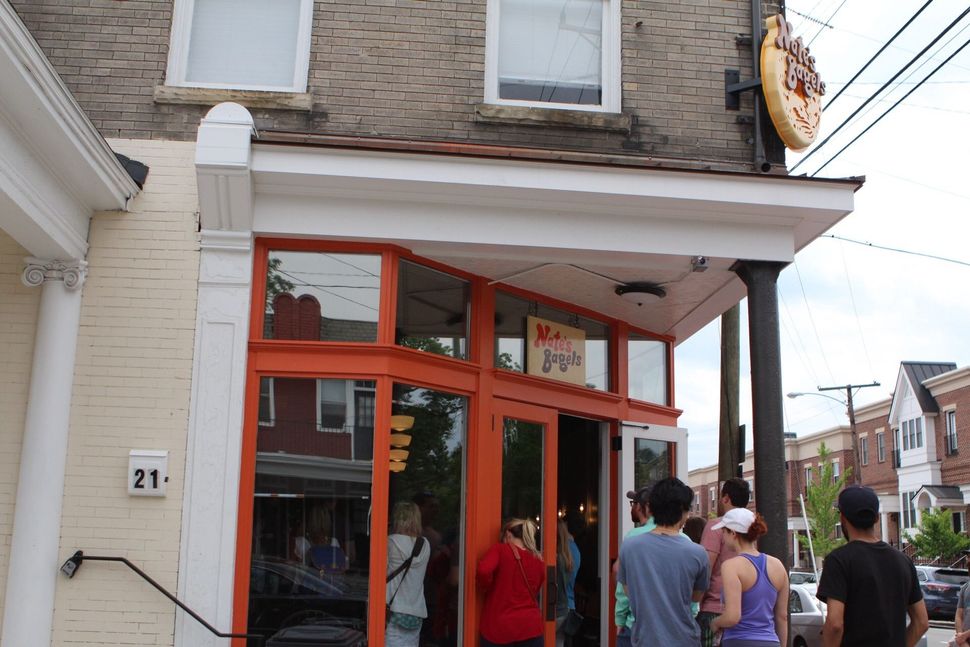 At one of the country’s hottest new bagel shops, the big influence isn’t Montreal or New York. It’s Pizza Hut.

“In high school, that’s where I learned the assembly-line approach to making sandwiches!”, laughed Nate Mathews, the Richmond, VA artisan-bagel sensation who just opened his first brick-and-mortar location after years of selling at farmers’ markets and pop-ups.

Nate’s Bagels, his airy shop in the city’s hip Fan District, has been selling out of bagels “daily” since its opening, Mathews told the Forward – more than 900 bagels per diem. Mathews has even restricted quantities in hopes of serving frustrated latecomers. “We cut off sales of half-dozen or dozen bagels,” he said. “Three is the most anyone can take home.”

The shop gives a Richmond spin to the traditional appetizing shop. House-whipped cream cheeses come in flavors like lox, blueberry, olive, and scallion; a signature schmear is infused with honey and Wildfire, a locally produced hot sauce. An expansive vegan menu includes house-made carrot lox, cashew cream cheese, and vegan sausages. “They make a great lox-with-the-works sandwich,” he said. Mathews predicted he’d move 20 pounds of cream-cheese spreads a day; his kithcne has been going through 50-80 pounds daily. “It’s all been a huge surprise,” he said.

In a city like Richmond, where Einstein Bros. Bagels routinely tops “Best Of” lists, Mathews high-touch approach feels game-changing. But Mathews insists that simplicity is his only secret. “We mix the dough, which is based on a very simple recipe,” he says. “Once the dough gets fluffy, we hand-roll it. The rolled dough ferments in a walk-in cooler for a while. It gains strength and flavor that way, and fermentation makes it a little bit healthier. Then the bagels are proofed, boiled, seeded, and baked.”

With no culinary training, New Hampshire-born Mathews started baking bagels two years ago “because they make people happy, and I really love them. I’d seen them on trips to New York as a kid. But we ate store-bought, grocery-brand bagels at home.” His itinerant bagel business, launched in 2016, became a huge hit, but also a slog. “We baked on awful equipment in a commissary kitchen with no a/c,” he said. “We had to bake, pack up the car, clean up the kitchen, which alone took 90 minutes, and get to the markets. But having a shop was the plan from the beginning. We just had a lot to learn.”

Now, his biggest challenge is keeping up. Everything bagels have been the most popular flavor, Mathews reports; sea salt/rosemary and golden cinnamon raisin are close seconds. A mysterious “Nate’s Bagel”, based on his own proprietary recipe, has also gained fans. “It’s a different dough, a little fluffier with a little more sweetness,” Mathews says. Edgier flavors like olive/zaatar and – God help us – blueberry and chocolate chip are on tap, too.

Next for Mathews and Nate’s: Catering, delivery, and “an evening concept with pizza bagels, pretzel bagels, and light dinner fare,” he said. “But we’re just in a foot race with hiring and training. And trying to bake and prepare enough food every day.” 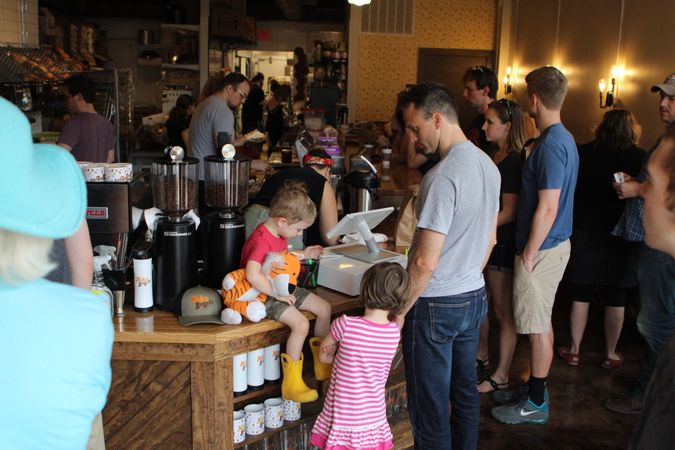