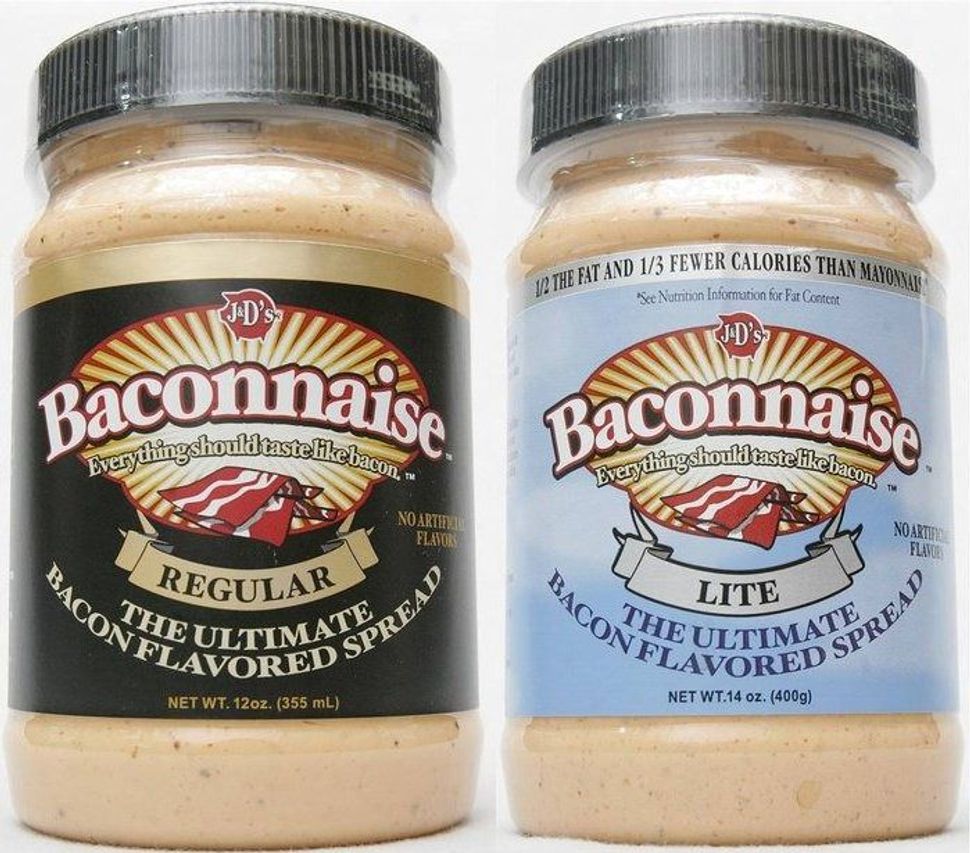 What is baconnaise? I first began hearing the name bandied around when I began research on bacon substitutes. I heard whispers of it in restaurant bathrooms and in anonymous comment forums dedicated to the goings on of the kosher world.

I had to know more about this mysterious substance, this bacon-flavored yet bacon-less mayonnaise, this mysterious kosher cultural lightning rod that has caught the eye of both Oprah and Jon Stewart.

The name is a portmanteau for bacon-flavored mayonnaise, that is vegetarian and kosher-certified. It was created by Justin Esch and Dave Lefkow, who cofounded J&D’s Foods, which was started with the $5,000 Lefkow won from sending footage to America’s Funniest Home Videos.

It began with just two ingredients and a customer’s idea: What if bacon was spreadable, like mayonnaise? They were initially apprehensive, considering that neither of them particularly liked mayonnaise. Tinkering with their invention was a very unhealthy process, as per their website: “Eat a slice of bacon, try a version of Baconnaise, eat a slice of bacon. Compare. Improve. Repeat. Over the 6 months it took us to make Baconnaise, we estimate that we probably ate 20 pounds of bacon, consumed 5 large jars of mayonnaise and took 2 years off of our lives.”

The jars flew off the shelves. 40,000 people bought the product within its first six months of existence. After being featured on both The Daily Show and The Oprah Winfrey Show, sales of Baconnaise increased significantly, with more than a million jars sold.

Yet most Jews don’t seem to know it exists.

“Sounds gross, no interest in trying it,” Mitch G. wrote me.

“I never heard of it,” said Phyliss M.

It would seem like a quintessentially Jewish product, being both kosher and bacon-themed without having any bacon in it. So why hasn’t it reinvigorated the kosher world yet?

Is baconnaise “capitalism’s greatest triumph,” as Jon Stewart called it? Is it, as per Stewart’s description, “for people who want to get heart disease but, you know, too lazy to actually make bacon”? Or is it, as per Oprah’s 2009 endorsement ( “Vegetarian and kosher! Thanks Justin and Dave! Get your own Baconnaise!”) a natural result of man’s creativity?

So what’s in baconnaise?

Baconnaise is more defined by what’s not in it than what is. It contains zero traces of the food that inspired its name and taste, and zero artifical flavors or MSG, but what’s actually in it remains a closely guarded secret. A modern manna of sorts.

Reviews for baconnaise were mixed. Does it belong in the pantheon of products created for people who cruised Walmart in electric scooters, like spray on-cheese and double stuffed Oreos? Or is it a healthy gateway to a better life, devoid of actual bacon but filled with foods that lacked MSG? Was this humanity turning to food with ingredient it couldn’t pronounce, a slap in the face to Michael Pollan’s declaration of ‘eat food. Not a lot. Mostly plants’ or was it a way for kosher-observant Jews to join in the worldwide bacon experience?

Maybe one day, when Jews have heard of it.