Why Food Preserving Is The New Hot Jewish Thing 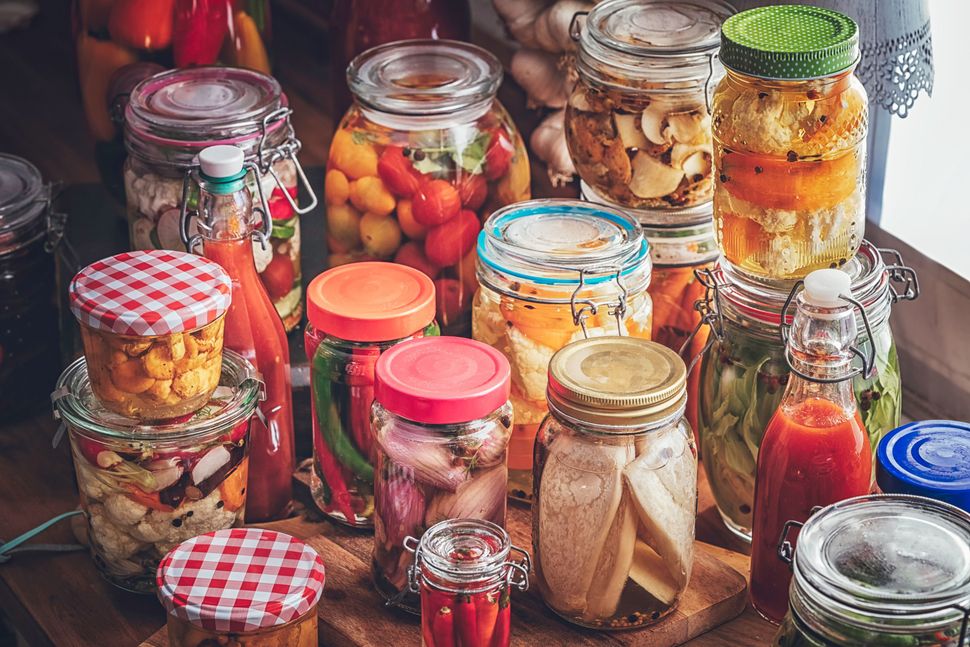 Judaism is all about preservation, both literally and figuratively. There’s a reason why some Jewish traditions haven’t been swept away by the tide of history – it’s because there were some dedicated preservationists out there making sure their way of life wasn’t forgotten.

Preservation is why, if you take a trip to New Square or Borough Park, you’ll find Jews living almost exactly as they did one hundred years ago, wearing the same garb, studying the same Torah and celebrating the same holidays. It’s why on Yom Kippur most Jews, secular, religious or otherwise, will crowd into a synagogue to listen to the call of the shofar. Preservation is a necessary way of life, but it’s also a cooking method — one that’s becoming trendy once again.

Chicago food blogger Emily Paster’s cookbook “The Joys Of Jewish Preserving” is an excellent, unprecedented look at the rich world of Jewish preserving, with foods and flavors inspired by the cuisine of the Jewish diaspora. Whether you’re a dedicated canner or a DIY amateur, this book is an excellent guide into the world of food preservation. “I think the art of Jewish preserving is deeply connected to the indomitable will of the Jewish people not only to survive but to carry on our way of life and our traditions,” Paster told me.

For the uninitiated, food preservation has been a necessity throughout history, before the advent of the refrigerator or freezer, as a method of making food last longer. There’s drying, salting, canning, and freezing. Food preservation dates back to the Bible, where pomegranates, dates and figs are mentioned, all foods that would have been preserved, as Paster explains in the introduction to her 75-recipe cookbook. “Because of the prohibition on mixing meat and dairy,” Paster explained to me, “Jewish cooks have always relied on fruit as a way to end a meal, even a festive holiday meal. This led to the need to preserve fruit and thus a lot of creativity in how fruit is preserved. The kosher laws also meant that Jewish home cooks continued to make so much of their own foods even after populations became more urbanized in the 19th century and people bought more commercially-prepared food.”

From the time the Jews lived in ghettos, and preserved foods to make them last throughout a long and brutal winter, to the elaborate Middle Eastern mezzes of pickled and marinated vegetables, Jews have always been proud preservers.

The Jewish tradition of preserving is symbolic of the Jewish will to survive. From sea salt sauerkraut (my Russian ancestors would weep with joy to see me eating that!) to apricot-poppyseed jam (for use in hamentaschen, obviously), these recipes are keeping tradition alive, one lacto-fermented pickle at a time.

“Preserved lemons are an indispensable item in my pantry cupboard,” Jewish food doyenne Joan Nathan said. Popular food blogger WhatJewWannaEat was keen to know what other foods she could brine. There’s the erstwhile Claudia Roden’s Middle Eastern take on preserving, which involves freezing food for 24 hours. Even BusyInBrooklyn, a prominent, current Jewish food blog, boasts a recipe of Pickled Deviled Eggs on her site.

But don’t be a shiterein cook! That’s Yiddish for someone who cooks from experience without measurements or recipes. Paster cautions the potential preserver to be cautious with ratios of fruit to sugar, of sterilizing water bath cans and of making sure jars are sealed. All good for the neurotic Jewish mind to read and obsess over. But surely making your own date syrup from the safety of your own home must be more hygienic than purchasing it in a store, when you have no idea where it come from, right? Right!

“I also think that the art of Jewish preserving is related to our propensity not only to survive but to thrive and enjoy life,” Paster told me. “That is why the book is called The Joys of Jewish Preserving. Jews don’t just eat to live; we eat because food is a delight and a pleasure.”

So enjoy your Jewish preserved gooseberry jam and enjoy the fruits (pun intended) of your Jewish heritage, because you cannot have one without the other.

Why Food Preserving Is The New Hot Jewish Thing