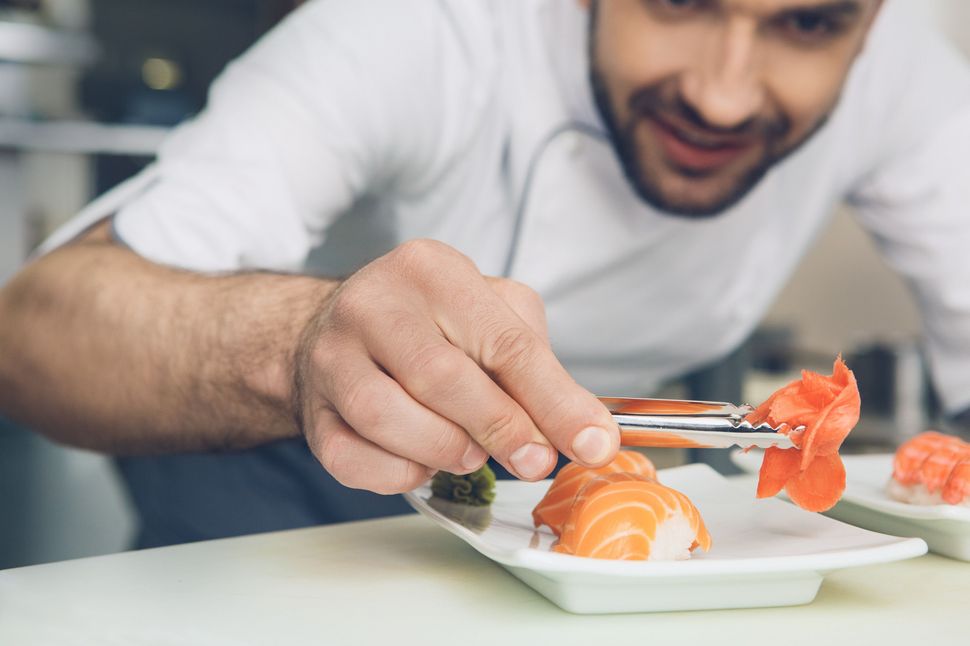 Of all the unexpected juxtapositions in the universe, comparing Jewish food to Japanese food might be one of the unlikeliest. Yet a new trend is emerging, and we at the Forward are paying careful attention to it.

Consider Shalom Japan, the happy result of a happy intermarriage between the Jewish Aaron Israel and the Japanese Sawako Okochi, which serves dishes like Matzoh Ball Ramen and is still raking in accolades after being open since 2013. There’s the Wise Sons Jewish deli outpost that recently opened in Tokyo, owned by Evan Bloom, that has had lines out the door in Japan’s capital. There’s Ivan Ramen, owned by Ivan Orkin, a Jew from Long Island, famous for his interpretations of ramen, filtered through his Jewish American sensibilities.

It’s why websites like the Jewish Food Experience are publishing guides to cooking Kosher Asian Food. (Molly Yeh’s tip: swap out the pork for chicken.) The Chabad of Tokyo, Japan, even has a list on its site, in both Japanese and English, of which fishes are kosher and which are not, for the discerning traveler looking to dip into some authentic Japanese cuisine. The Orthodox Union and the British KLBD certification have even opened departments in Japan to help feed a growing need to monitor a burgeoning phenomenon.

In fact, historically, Jews even played a bit of a role in bringing sushi to America. Los Angeles was the first American city to realize a love for the precisely-made street food. The restaurant Kawafuku was the first to make traditional sushi available to Californians and it was opened by a man named Noritoshi Kanai and his Jewish business partner, Harry Wolff. Today, 80-90% of kosher restaurants serve sushi, according to Rabbi Elefant, the Chief Operating Officer of the Orthodox Union.

In the midst of this burgeoning phenomenon, I reached out to Nancy Hachisu Singleton, an authority on Japanese food culture, as author of Japan: The Cookbook (billed as the definitive Japanese home cooking recipe collection) to find out what Jewish and Japanese food had in common.

The Japanese philosophy of “motai nai” struck me as particularly similar to the Jewish philosophy of baal tashchit, the Biblical prohibition of not wasting. “Motai nai is deeply engrained in the traditional and historical culture of Japan,” Hachisu wrote me. “This frugality comes from a time when there was much less available and people had to eat what they grew, so no waste was a necessity as well as a way of life.”

There is a similar value placed on mindfulness while cooking in Japanese culture. Hachisu spoke to me about “the method of treating or seasoning each component in a dish separately before folding together,” telling me that “this mindfulness is exactly how I like to cook.” As any kosher challah baker who has to stop their kneading of the dough to make the blessing can tell you, kosher cooking often demands mindfulness as well, with all the required blessings and attention to detail when it comes to the intricate laws of kashrut.

Like with Jewish food, there is an oral tradition of sharing recipes in Japan and passing them down from family to family for home cooking. “Love and care are integral to home cooking,” Hachisu wrote me. You don’t need a trend-spotter to know that that’s universal.