Where To Find Kosher Haggis — Yes, It Exists. 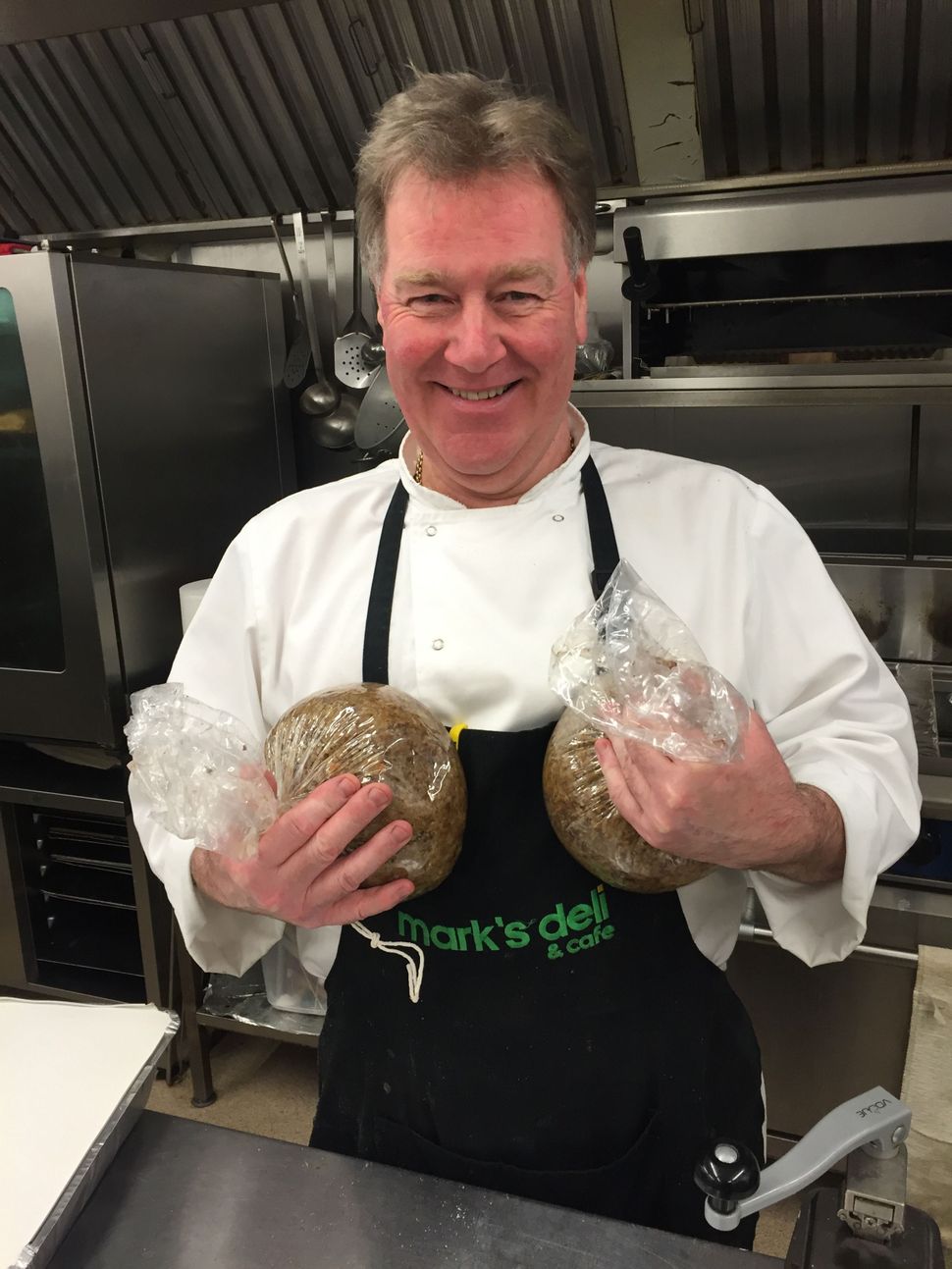 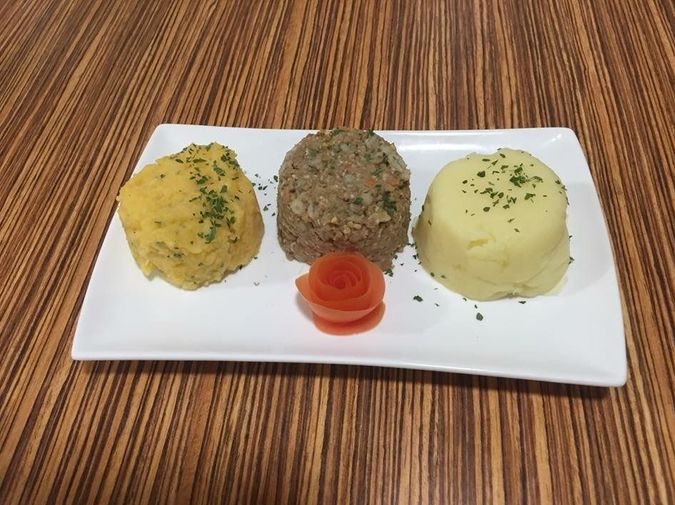 Haggis is the national delicacy of Scotland and it’s not exactly known for its Jewish appeal. It’s a type of pudding made up of the liver, heart and lungs of a sheep, mixed with beef and oatmeal, seasoned with onion, cayenne pepper and other spices, then packed into a sheep’s stomach to be boiled.

On Burns Night, the Scottish holiday dedicated to celebrating the poet Robert Burns’ birthday on January 25th, this ancient, rustic delicacy (so ancient no one knows where the word haggis was derived) is served with pomp, circumstance and a few accompanying bagpipes. It’s also a staple on New Year’s Eve, or what the Scots call Hogmanay.

There’s only one man in the world who can make it kosher and he runs (what else?) a Jewish deli in Glasgow, Scotland.

“Our kosher haggis is our ‘interpretation’ of haggis,” Mark Cohen, owner of Mark’s Deli, wrote me. “We don’t use heart, lungs or stomach or a sheep’s stomach! We use lamb mince to obtain the right flavour and our own blend of spices.” 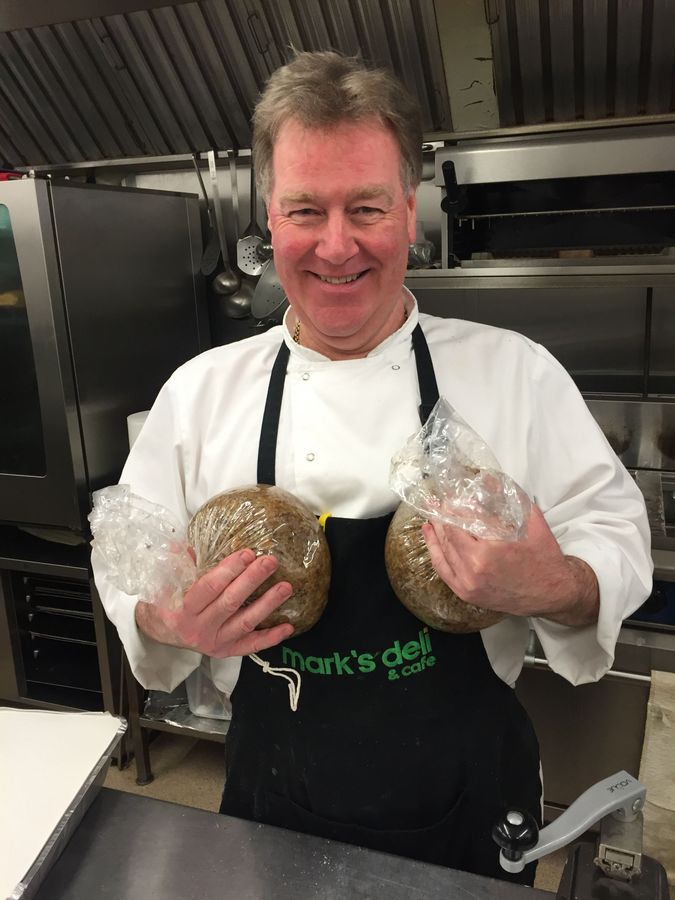 Mark’s Deli is a rarity, the kosher-certified authentic Jewish deli far from its origin. “Scotland is like a mini Jewish diaspora,” Cohen told me. “There are families in the smallest little villages. Literally it might be one family. We send kosher chickens to the borders, we send steaks and matzo meal to the highlands. At Pesach we seem to send matzo everywhere!”

In Scotland’s 2011 census, only 5,887 Jews were accounted for. 25% of all Scottish Jews live in the suburb of Newton Mearns to the south of Glasgow. Yet Mark’s Deli continues to cook – but it’s not just for its regulars. “We have a lot of American tourists who visit Scotland and come to the deli to sample our kosher haggis,” Cohen wrote. Mark’s Deli has dispatched dishes like latkes and lokshen all over Scotland. From delivering food to Islay for Jews on a whiskey tour to sending food to John O Groats, the most northerly part of Scotland, for a group of Rabbi cyclists on the move, he provides a service to all kinds of Jews.

Mark’s Deli is the only kosher deli in the whole of Scotland, filling a void for Jews homesick for a life they never had, serving authentic Jewish eats alongside Scottish traditional fare to all kinds of Jews. “We feed everybody from the little old lady who lives down the street, large families, visiting businessmen and tourists, hotels, conference centres, even the Scottish Parliament who regularly engage with the Jewish community. There was a Chanukah party at the Scottish Parliament last year! We have even sent food to one of Donald Trump’s hotels. Rumor has it that his daughter was in town.”

Burns Night is a big night for Mark’s Deli. On the 25th of January every year, everyone in Mark’s Deli rolls up their sleeves and gets to work making over 150 kilograms, or 330 pounds, of kosher haggis to send all over the UK. From London to Manchester to Glasgow to Edinburgh, all kinds of Jews are hungry for the spicy, meaty flavor of kosher haggis.

One place Mark’s Deli doesn’t send kosher haggis to? The United States. In 1971 the FDA declared haggis illegal to export to the US because of a ban on sheep lung. ‘I have a wonderful customer in Manhattan who wrote to me asking for some kosher haggis,” Cohen told me. “Her daughter is apparently a ‘Scotophile.’” 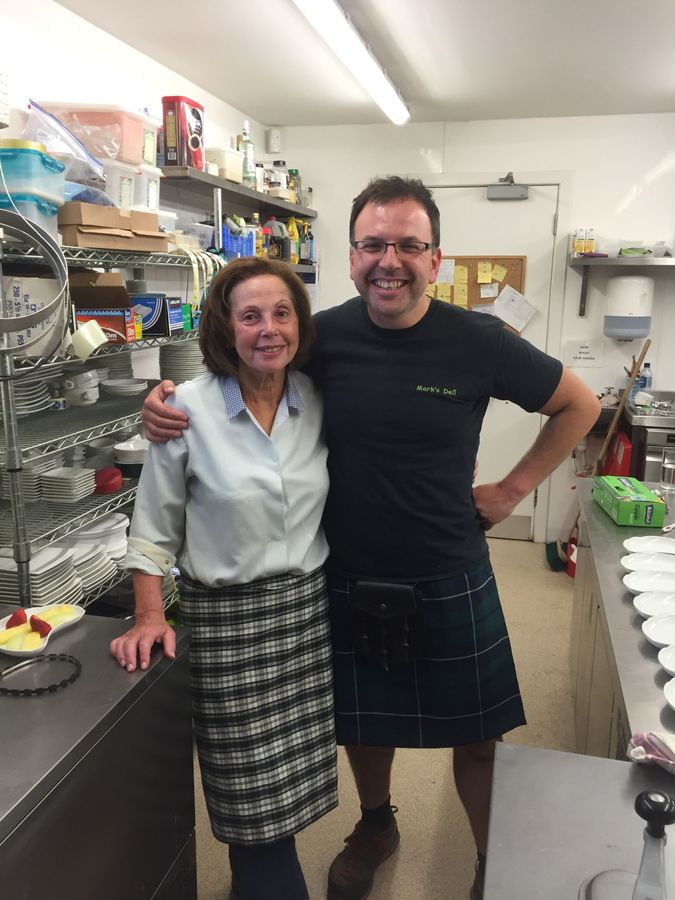 Cohen may or may not have smuggled haggis to this customer for Burns night for the past couple of years. But haggis smuggling wasn’t an easy process. “The first year my mom happened to be going to New York and smuggled it in her suitcase. The second year I tried to courier it. I wrote very vaguely on the customs form in my best ‘doctor-like’ handwriting …. ‘kosher spicy mince.’ I packaged it beautifully in dry ice and waved my kosher haggis goodbye when the courier came to collect it. My wonderful customer didn’t call to say she had received it, and a few days later, it was duly returned to the deli by the courier. It had been round the world, but US Homeland Security clearly didn’t like the look of it!”

In fact, while haggis might not be the most photogenic of foods, what it lacks in looks it makes up for in taste. Larousse Gastronomique describes it as having “an excellent nutty texture and delicious savoury flavor.”

Cohen, concerned his haggis wouldn’t reach his New York Scotophile, reached out to a businessman who visited his deli who was working in Glasgow for a few days. “I explained the situation to him, and he agreed to be my ‘courier.’” Cohen gave the businessman some haggis for his troubles and sent him on his way. “He must have had an honest face because he cleared JFK customs with the haggis safely enclosed in his suitcase. And my wonderful Manhattan customer who has become somewhat of a celebrity in her community after ‘Haggisgate’ was able to have her Burns Friday night dinner. It was bashert!”

Where To Find Kosher Haggis — Yes, It Exists.