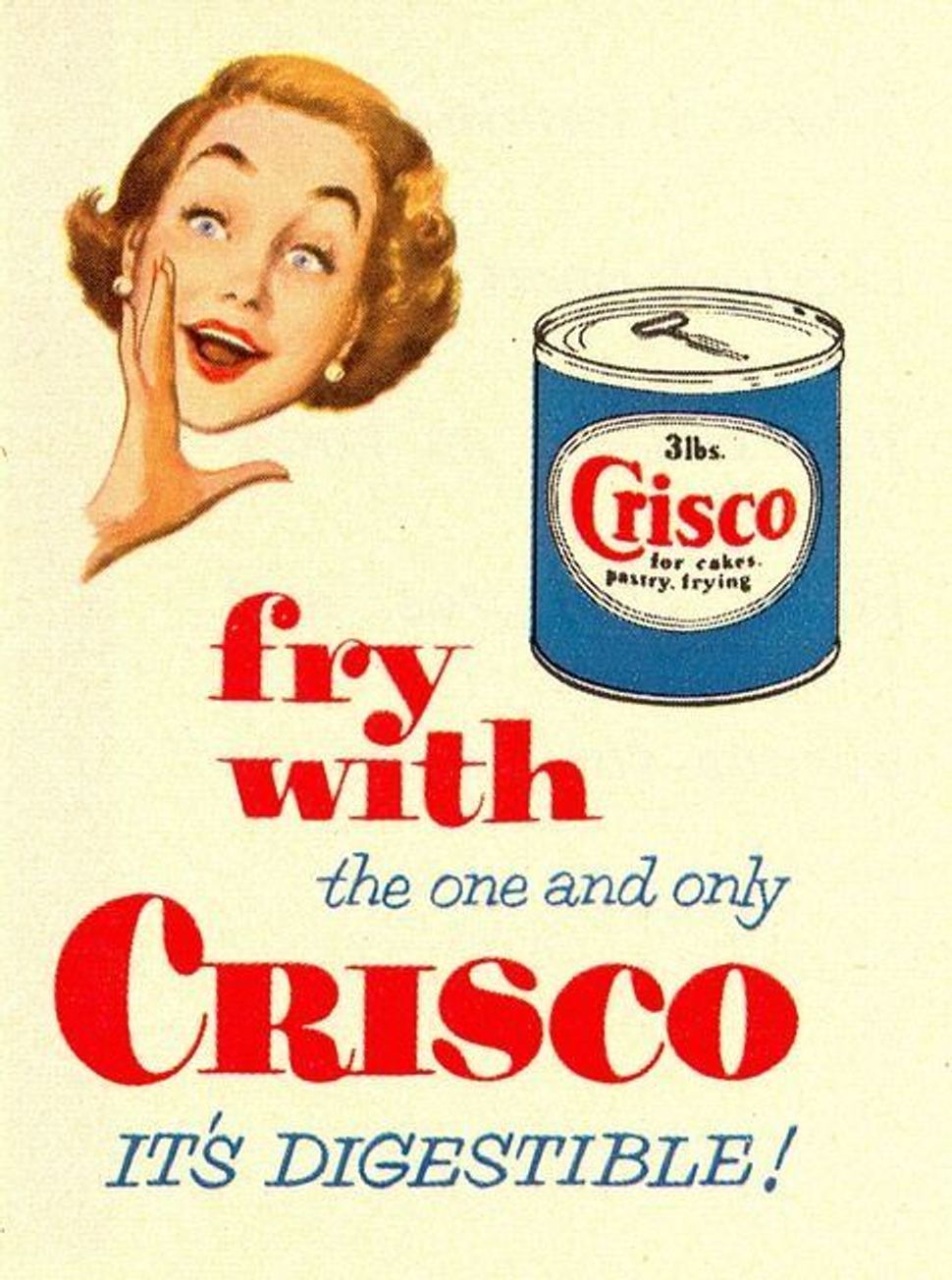 “Crisco Recipes For The Jewish Housewife” was a slim, 77-paged piece of marketing material slash cookbook, manufactured by Proctor and Gamble and copyrighted in 1933. Crisco, the first brand of shortening to be made entirely of vegetable oil, happened to be neither dairy nor meat, making it the perfect product to hawk to Yiddish speaking immigrant mothers and their more assimilated daughters wanting to cook with more advanced, processed American items like Crisco. An alternate title for the cookbook? “Ḳrisḳo resepies far der idisher balebosṭe.” The cookbook was printed back to back in both Yiddish and English, and it, along with Proctor and Gamble, was responsible for ending the use of schmaltz in America. 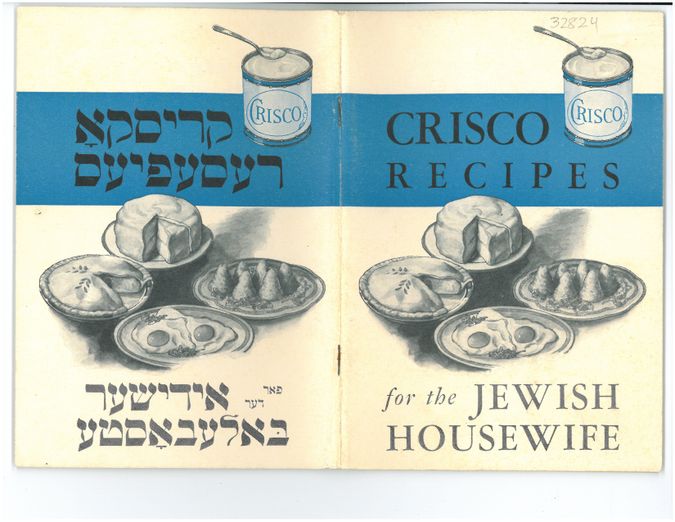 Every recipe in the cookbook required generous amounts of Crisco, from Beet Kugelach (in which aspiring cooks are instructed to “place [ingredients] in a hot skillet containing enough melted Crisco to cover the bottom generously”) to a Macaroni Mold (which was to be cooked in a well-Criscoed ring mold). The cookbook contained traditional recipes like chremslach, but cooked in the most untraditional of ways, with a wholly American lab-processed product.

For Jewish immigrants fleeing from anti-Semitic countries, this was one of the first few times they felt seen by the American marketing industry. Jews were a previously uncapitalized-on market sector, and Proctor and Gamble realized that the Jewish yen for assimilation was a commodity waiting to be monetized.

Crisco might have been kosher (Procter & Gamble reports kashrut certifier Rabbi Margolies as saying “that the Hebrew Race had been waiting 4,000 years for Crisco”) but Jews were initially reluctant to use it, as it bore a striking physical resemblance to lard, the creamy, highly non-kosher processed pig fat used to add depth and flavor to a meal. And that was intentional. Crisco was one of the great food inventions of the 1900s, and a significant step in the processed food revolution. When German chemist E.C. Kayser showed up to the corporate offices of Proctor and Gamble with a ball of hydrogenated cottonseed oil in 1907, jaws dropped. This creation looked like lard. It cooked like lard. But it could be made for a heck of a lot cheaper than lard — or schmaltz. 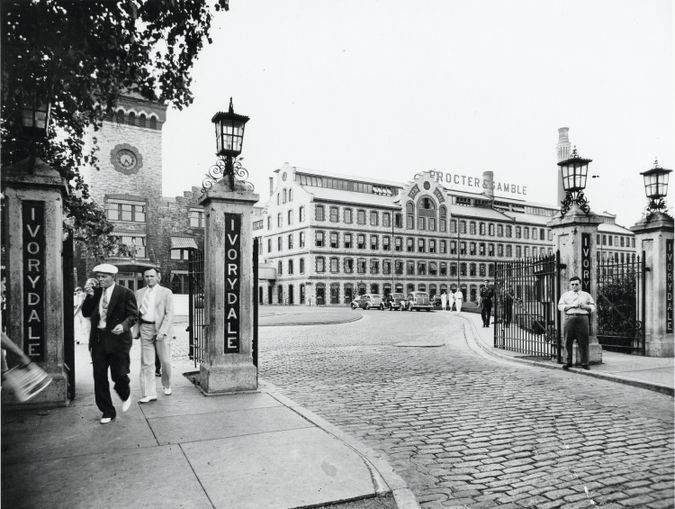 Men standing in front of the gate of Procter and Gamble’s Ivorydale plant, Cincinnati, Ohio, 1930s (Photo by Cincinnati Museum Center/Getty Images). Named for Ivory soap, the plant grew to become a complex of 120 buildings on 243 acres and included its own fire department, dining rooms, and recreational facilities. Crisco shortening, Tide laundry soap, and Crest toothpaste are a few of the products that have been manufactured at the plant. Image by Getty

Crisco’s goal? Replacing lard in the eyes of the American consumer. Insidious ad campaigns were launched, trumpeting Crisco as pure and declaring that “the stomach welcomes Crisco.” Lard was associated with unhealthiness and fat, an association that remains to this day. Scientists added their voices to the cacophony, finding a correlation between lard consumption and heart disease. 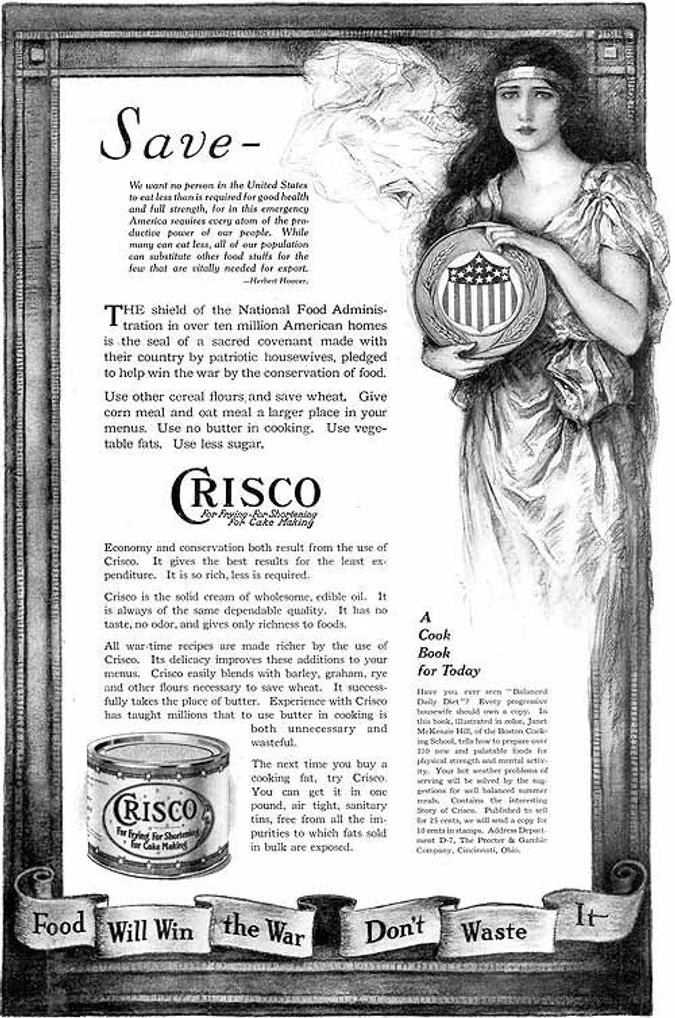 In contrast, Crisco’s odor was not unpleasant, it was cheap, it was easily accessible, it was lab-made and therefore assumed to be resistant to the bacteria that infected farm food in the 1920s. 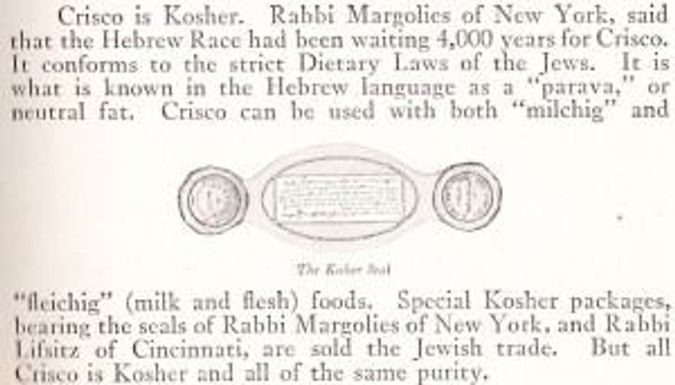 Crisco could be used in place of the shmaltz, or rendered animal fat, that Jewish cooks from Eastern Europe relied on. This very newspaper ran ads for Crisco as a show-stopping new kosher product. And with the spread of chicken disease in the mid-1920s, Crisco as an alternative to shmaltz became a must.

In 1985, Crisco became OU-certified,, and Jewish housewives quickly gave up cooking with schmaltz and turned to Crisco.

In the process, though, something rather authentic was lost. The artery-clogging, traditional, crisp Jewish ingredient of shmaltz had disappeared, and Crisco had replaced it.

In 2016, the cookbook was digitized by the New York Public Library, where it is available online.