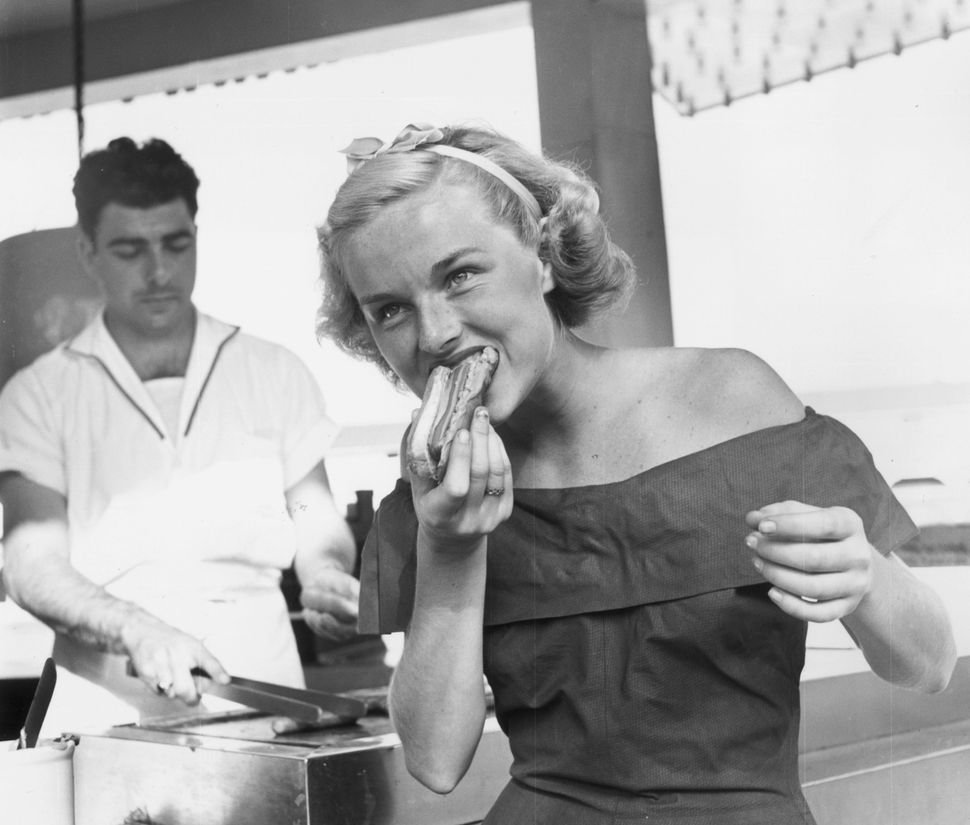 Historians follow the hot dog trail all the way back to Roman emperor Nero’s cook Gaius, who may or may not have masterminded the creation of the sausage. Germans loved nothing more than feasting on a sausage with beer and some kraut. The birthplace of the first modern hot dog is contested, but it’s no surprise that the fight came down to Frankfurt and Vienna.

But the man who made the hot dog the cultural juggernaut it is today wasn’t German (or Roman!). He was a Jewish immigrant from Poland named Nathan Handwerker. It all started at a hot dog stand stationed in Coney Island that opened in 1870, owned by a German Jew by the name of Charles Feltman. Some believe Feltman, who was from Frankfurt, Germany, was the first to shove some hyper-processed meat into a roll so people could eat lunch on the go. By 1900 Feltman employed 1200 workers at his German beer garden and had the capacity to serve eight thousand people daily. One of those 1200 employees was Nathan Handwerker.

By 1915, Handwerker, who was biding his time working for Feltman, was living off the hot dogs he sold, eating them for breakfast, lunch and dinner, making a measly 5$ a week serving them up to people, and sleeping on a kitchen floor for a year while he raised $300. (Today, that $300 he scrimped and saved for would have the buying power of $7,322.50.) That $300 was destined for greatness.

Handwerker used it to open a competing hotdog stand called Nathan’s Famous, which charged 5 cents a dog, compared to his ex-employer’s 10 cents. It was a triumph of pure capitalism. Every American cliche became true when it came to Nathan’s Famous: You can pull yourself by your bootstraps. You can come to America to make a man out of yourself, to a place where the streets are paved with gold. There is money to be made in America, and the American dream is not just reserved for a select mythic few. When the Great Depression blasted across America, Nathan’s Famous weathered the storm, even as his competitors crashed and burned.

What made Nathan’s Famous so impervious to the socioeconomic struggles of the day? For one, like every capitalist, Handwerker was an excellent marketer. “Nathan, Nathan, Why You Waitin’?” Sophie Tucker famously sang in 1916. Public relations flunkies for Nathan’s Famous described the song as the inspiration for the name of the store, cleverly reframing the romantic jingle into some musical product placement.

Jaded customers were skeptical, wondering what drek, or slime, Handwerker put in his hot dogs to keep costs so low. Handwerker hired actors to stand in front of the store in full doctor’s regalia, white coat and all, and devour hotdogs with relish. When crowds saw this bit of marketing maneuvering, they queued up to purchase, confident in the (mistaken) knowledge that if Nathan’s Famous hotdogs were good enough for medical professionals, they were good enough for your average Brooklyn Jew and his wary, nagging mother.

Nathan’s Famous hotdogs were so famous that first lady Eleanor Roosevelt, who was the indisputable arbiter of American class and taste in 1939, decided to serve them to King George VI of England and his queen. “So many people are worried that the dignity of our country will be imperiled by inviting royalty to a picnic, particularly a hot dog picnic!” wrote Roosevelt in her syndicated newspaper column. But that didn’t matter. It was the American way, to break with tradition, to mix high brow with low brow, to serve a reigning monarch the reigning fast food of the time. And it worked. King George loved the grilled hot dogs so much that he requested seconds.

By the time those enterprising Jewish Lower East Side butchers caught on to the trend, serving all-beef hotdogs with mustard and horseradish, it was official: the hotdog was chasing a dream of American citizenship. By the time the Hebrew National Kosher Sausage Factory opened in the Lower East Side in 1905, it was official: The hotdog was as American as Abraham Lincoln or sweet tea.

Jews ate hot dogs because they were cheap, accessible and had been so completely swallowed up by American culture that they did not register as Jewish. Eating a hot dog in public made a Jew more American. It was one of many symbols of proof that the Jews had made it, as New Yorkers, as businessmen, and as Americans.

Shira Feder is a writer. You can reach her at feder@forward.com and @shirafeder