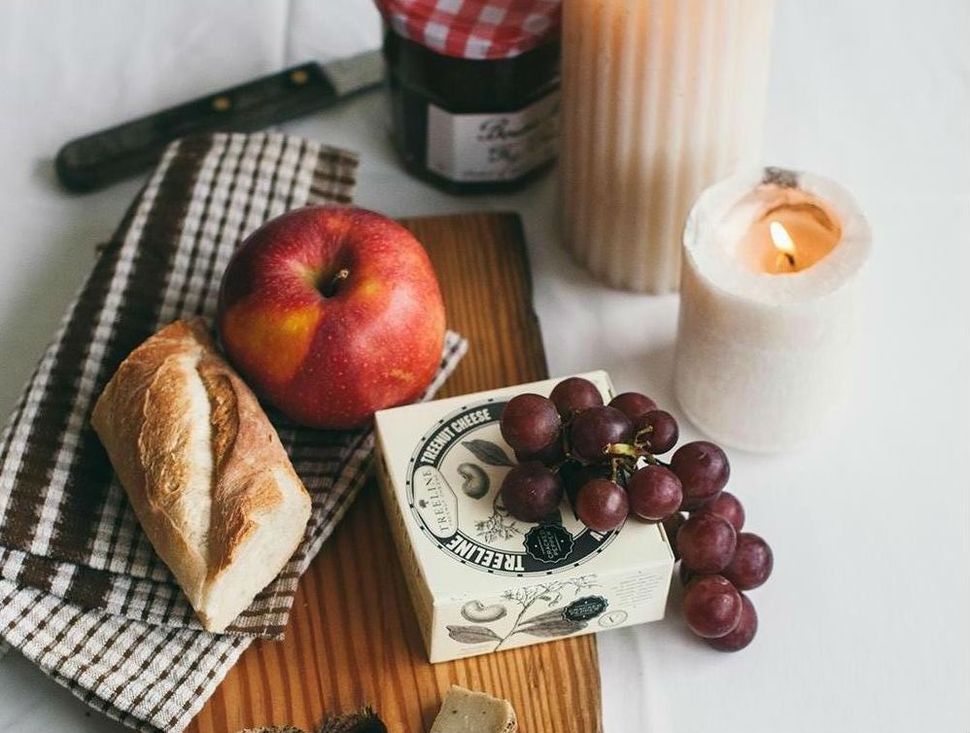 Call him the accidental kosher cheesemaker.

Michael Schwarz was practicing intellectual-property law in New York City when a career change started nagging. “I just didn’t want to do it anymore,” he said. “And I started looking around for something that would take my fancy.”

His revelation came in an unlikely venue – the supermarket. “At the time, I was vegan. I couldn’t find good cheese anywhere,” he said. “And I realized there was an opening in the market that was a good opportunity to do something I believe in”

Schwarz kept Jewish consumers in mind when he concocted Treeline’s nut-based products. “There are a lot of kosher vegans, and a lot of Jews who are lactose-intolerant,” he said. Where it really helps is that you can bring our cheese to the table if you’re serving meat, but there’s a guest who’s vegan.” The kosher certification process was “simple”, he said. “All of our ingredients were already kosher and pareve.”

Treeline’s cheeses are the latest in a crowded field of non-dairy cheese products, but Schwarz claims there’s a key difference: Fermentation. “We take nuts, inoculate them with bacteria, and ferment them the way conventional cheese is fermented,” he explained. “Other vegan cheeses imitate dairy cheese with flavorings.” Among vivid varieties like herb-garlic, chipotle-serrano, and cracked pepper, the herbed garlic soft cheese is Treeline’s biggest hit, “by a long way,” Schwarz said. “That’s the one the big chains have picked up on.”

There’s a powerful Jewish backstory to Treeline’s success. Schwarz’s late father, Harry, was a German-born refugee from the Nazis who emigrated to South Africa as a child. A lawyer himself, Harry Schwarz ascended to the top of South Africa’s political establishment, becoming the country’s ambassador to the United States after a career defined by outspoken opposition to apartheid and anti-Semitism. When it honored him with an honorary doctorate South Africa’s University of Stellenbosch hailed him as “one of the conceptual and moral fathers of the new South Africa”.

The elder Schwarz’s experience “meant that I grew up with the idea that some things are just wrong, and that you have to do something about them,” Schwarz said. “For me, the injustice of forcing animals to give birth, taking their offspring away so they can’t bond, and maybe killing them when they can’t give milk anymore… The strongest bond is between mother and baby. For their own gratification, humans violate that.”

Likewise, Treeline’s “most important customers have always been people who are giving up dairy for ethical reasons,” Schwarz said. “Now, that’s evolving. There’s a growing recognition that dairy isn’t a food we should have past infancy. It’s amazingly powerful for babies and cows, but we’re the only mammals that consume it into adulthood.”

The company’s about to roll out a new line with even bigger implications for kosher-keeping cheese-lovers: Plain cream cheese that’s vegan, fermented, without thickeners, gums, or stabilizers. “It’s almost indistinguishable from dairy cream cheese, and it’s quite amazing,” Schwarz said. “It works on a bagel, on pasta, to thicken sauces, really anywhere you’d use dairy.” In his homeland of South Africa, he added, cream cheese is a popular filling for hamentashen. “You can use ours for that, or for blintzes.”

These days, Schwarz’s day-to-day involves “a lot of stress”, he laughed. “The most difficult thing has nothing to do with cheese. It has to do with retailers, distributors, and manufacturers. The making and packaging of food is an extremely difficult business. It takes nerves of steel.”

Success means “you have to think outside the box,” he said. For that, he said, he can credit his mother Annette, a onetime art teacher still active at 92. “She’d say paint a picture of dog, and some kids would say, ‘I can’t do that’,” he said. “She’d respond, ‘there’s no such thing as can’t.’”. Her influence, and my father’s, are still the major drivers in my business and my life.”