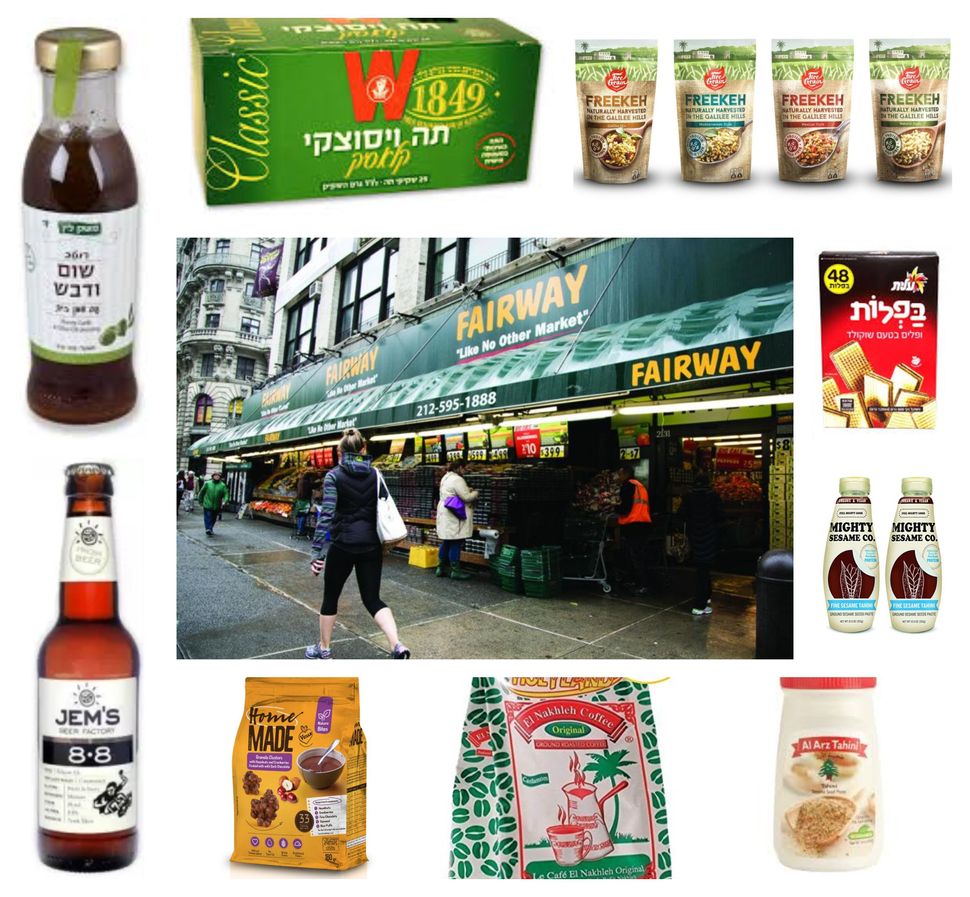 On a muggy October morning, I trekked over to the Fairway Market in Red Hook, Brooklyn, for a breakfast event with representatives of 15 Israeli companies who offered samples and information about their products. The promotion, called “Taste Israel: A World of Flavors,” was presented in the Fairway café overlooking the waterfront. The products will be available in 15 Fairway markets between October 12 and November 1, and as part of the promotion, Fairway is raffling off a pair of round-trip tickets to Israel on El AL and a five-night stay at a Dan Hotel.

The breakfast event in Brooklyn kicked off with a presentation by Fairway CEO Abel Porter, Israel Consul General Dani Dayan, members of Israel’s Ministry of Economy and Industry and Israel Export Institute.

“Israel is a gastronomic superpower with some of the world’s finest offerings, many that are being highlighted as part of this program,” said Dayan. 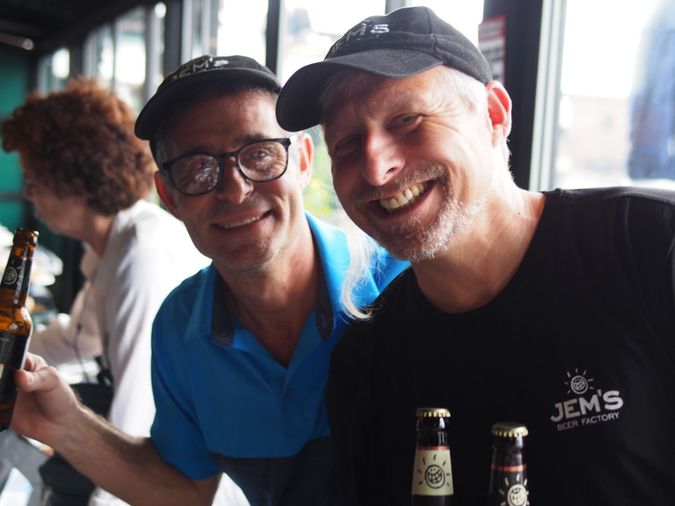 “We brought [Fairway Executive Director of Fresh Foods] Richard Rosenberg and a colleague of his to Israel to experience all the foods that they would be having in the store, and then when they came back they developed a relationship with the vendors and decided which ones they liked the most and which ones they wanted to bring with Fairway,” said Elisa Greenberg, director of trade and business development for the Government of Israel Economic Mission. “Because of the special relationship that Fairway has forged with the Jewish community, and being a native New Yorker, I had a feeling this could be a great partnership.” 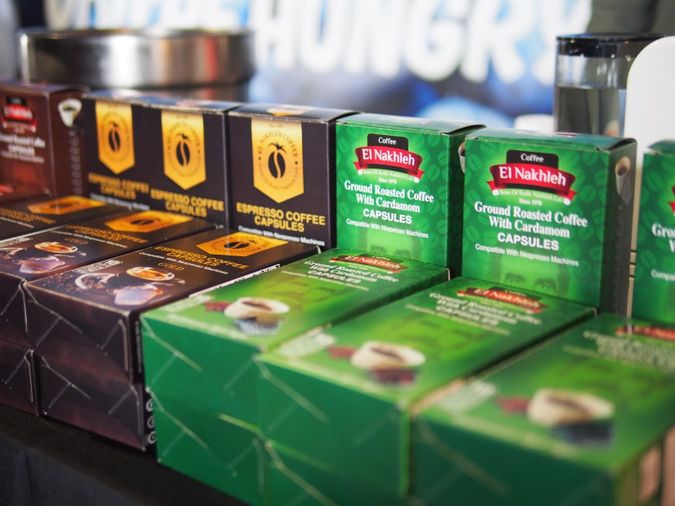 El Nakhleh coffee began as a small shop in Shefa-‘Amr and is run by the founders sons. Image by Liza Schoenfein

We were encouraged to sample the products, which were presented at a series of long tables. I started with a strong cup of cardamom-flavored coffee, made from a Nespresso-friendly capsule. The coffee, available in three varieties — the others are regular and espresso — is from El Nakhleh Coffee Sons of Rafik Nakhleh Ltd. and is, in fact, run by the founder’s sons out of a factory in Shefa-‘Amr, Israel. (Buy it on Amazon here.) 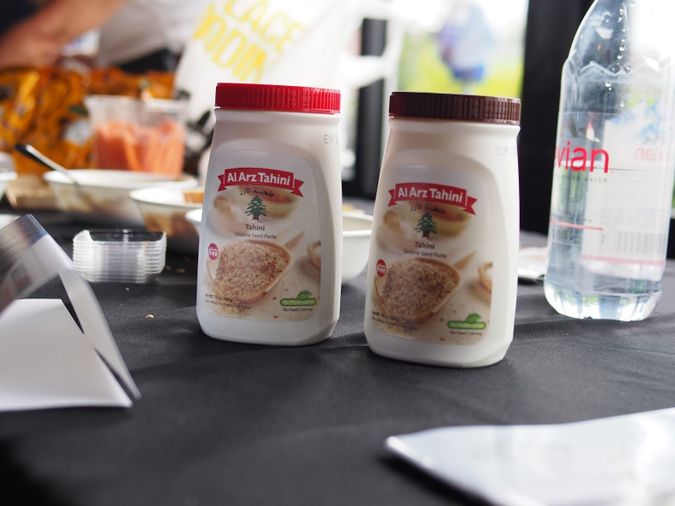 Al Arz Tahini is made in Nazareth. Image by Liza Schoenfein

Next, I dipped a piece of sesame-seed bread in some delicious tahini. Popular in Israel, Al Arz Tahini is made from Ethiopian sesame seeds and is mild, nutty and smooth. It comes in three formats: classic, whole seed, and organic. The small family business is based in Nazareth. (Buy it on Amazon here.) 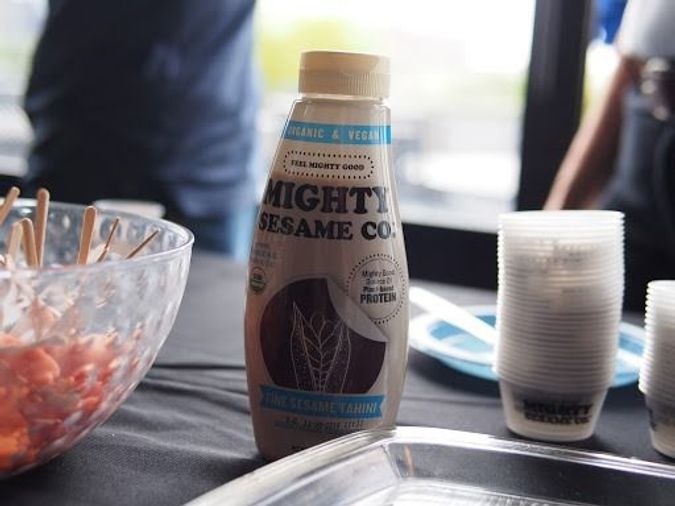 Israelis put tahini on practically everything, so it wasn’t a surprise to see a second version of this ubiquitous condiment a few feet away. Mighty Sesame Co.’s version comes in a squeeze bottle, already thinned out and ready to use. (Most tahini is thick and requires diluting.) (Buy it on Amazon here.) 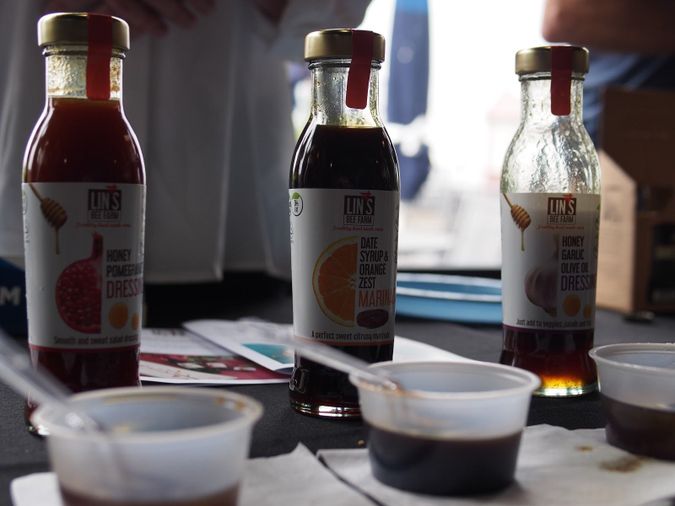 Honey and date-based marinades and dressings from Lin’s Farm. Image by Liza Schoenfein

A row of honey and date-based marinades and dressings came from Lin’s Farm, a family farm (with beehives) that produces gourmet food products out of its own wildflower honey and homegrown dates. I sampled an orange-spiked date syrup marinade that I thought would be great with chicken, and a spicy ginger-chili honey marinade that would be amazing on, well, anything, but perhaps especially red meat. There’s also a date syrup, a honey pomegranate dressing, a honey peanut curry and a honey garlic olive oil dressing. 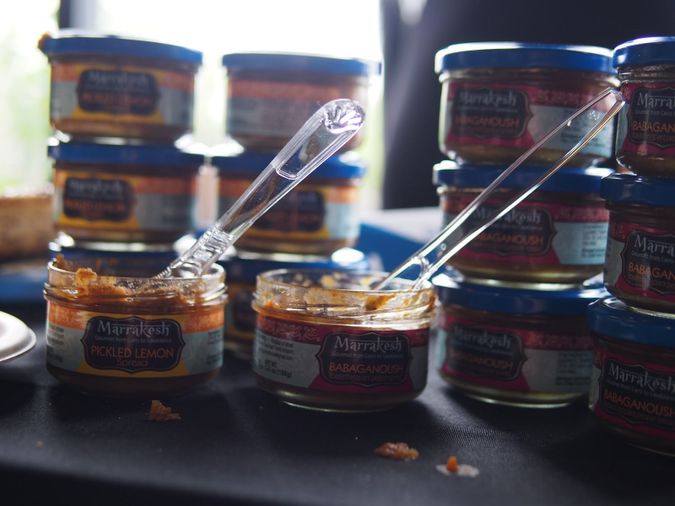 Marrakesh dips and spreads packs a lot of flavor into little jars. Image by Liza Schoenfein

Marrakesh: Gourmet from Cairo to Casablanca

I was wowed by a little jar of what was called pickled lemon, which tasted like good preserved lemons in a chopped, relish-like format. I would add it to North African and Middle Eastern dishes or use it as a condiment for fish. It was from a company called Marrakesh: Gourmet from Cairo to Casablanca. I also sampled the company’s babaganoush, which had excellent flavor — it didn’t taste like it came out of a jar. 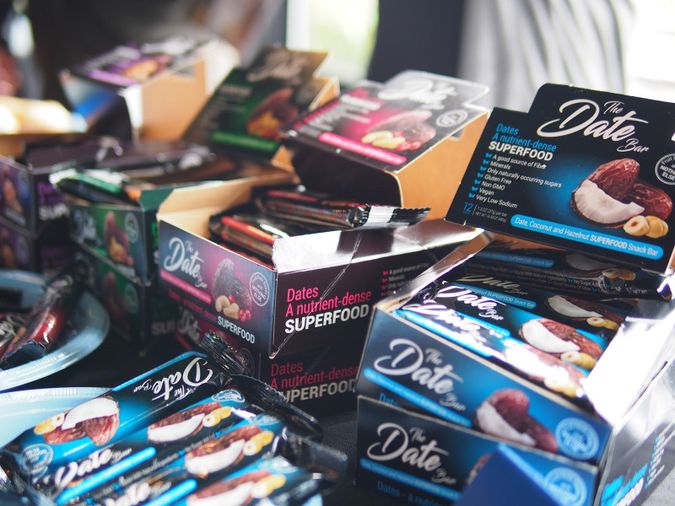 Super healthy and satisfying energy bars are made from dates, nuts and seeds. Image by Liza Schoenfein

Energy bars from The Date Bar are made from fruit, nuts, seeds and nothing else, according to the packaging. I sampled the date, coconut and hazelnut variety, which tasted good — and was entirely guilt free. The bars also come in date and walnut, date, cashew and cranberry, and date and peanut. 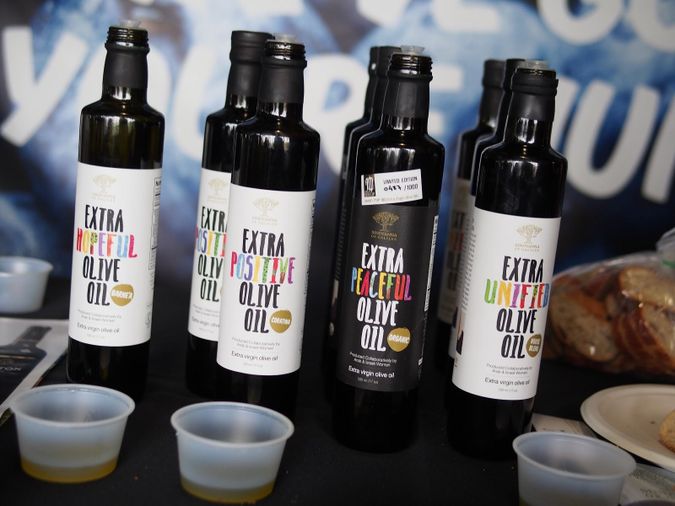 This fair-trade, award-winning olive oil is made by Sindyanna of Galilee, a female-led company where Arab and Israeli women work together, sharing a vision of peaceful co-existence. Image by Liza Schoenfein

I was drawn in by the labels of Extra Peaceful Olive Oil from Sindyanna of Galilee. Sindyanna describes itself as a not-for-profit, fair-trade company that’s working towards empowering women and creating co-existence between Arabs and Israelis. The label says the oil is produced collaboratively by Arab and Israeli women. It also happens to be delicious. (Buy it on Amazon here.) 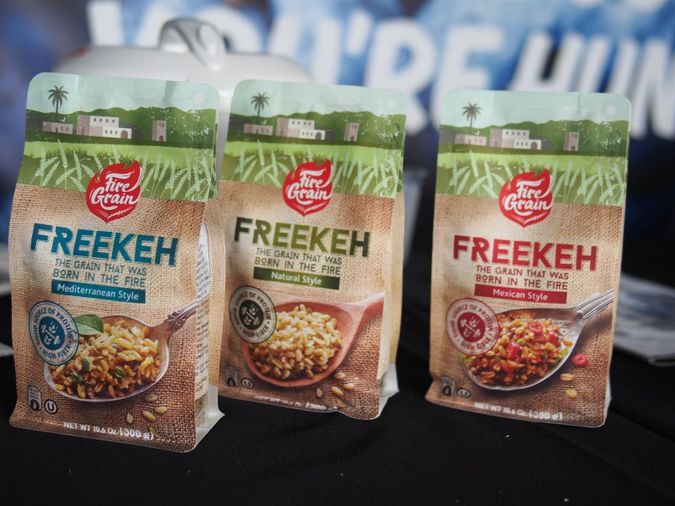 Freekeh is made from wheat that’s harvested while still green, then roasted. Image by Liza Schoenfein

“Do you know what freekeh is?” asked the man behind the table, who was tending to a few small rice cookers. I did, but I realize it’s not a commonly known grain in the U.S. Freekeh is made from wheat that’s harvested when it’s still green, then roasted. It has a pleasingly toothsome texture and closely resembles farro (which is at least somewhat better known here). It’s cooked exactly the same way rice is, though it takes about five minutes longer. Fire Grain Freekeh comes in three varieties: Mexican, Mediterranean and plain. What looked at first like tubs of ice cream turned out to be big containers of delicious Open Sesame halva. Image by Liza Schoenfein

And then I spotted them: huge tubs of halva. Halva Kingdom produces Open Sesame halva in flavors including chocolate chip, date, and pistachio. This product is made from first-grade Humera Ethiopian sesame seeds and ground the old-fashioned way, with a grindstone. The company says its method of grinding is “10 times slower than industrial grinding methods,” and the resulting quality and flavor seems to justify that process. The halva sold at Fairway will come in smaller packages. ( 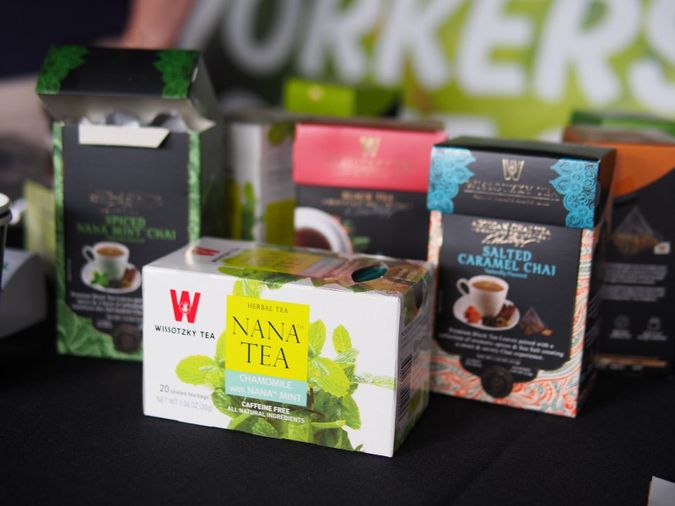 Founded in Russia in 1849, Wissotzky is an Israeli-based, family run company that’s recently introduced some ultra-untraditional flavors such as salted caramel chai. Image by Liza Schoenfein

After so much nibbling, I needed to be revived. Enter Wissotzky Tea, which comes in classic flavors such as chamomile mint and classic green tea and now boasts a number of modern flavor combinations including salted caramel chai, ginger and turmeric spiced chai and spiced Nana mint chai, which is what I tried. Made with black tea, it gave me the caffeine boost I needed and It tasted great. Just the fortification I required to continue with the tasting task at hand. (Buy a variety pack on Amazon here.) 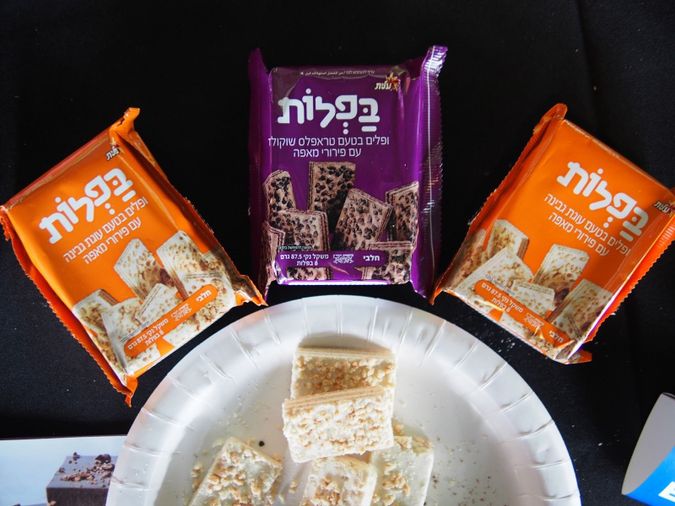 Israelis love wafers the way Americans love chocolate-chip cookies, the woman promoting Elite confections tells me. There were chocolate-coated wafers with peanut-flavored cream, chocolate covered biscuits and cream, and a new cheesecake-flavored wafer, among others. The closest American comparison would probably be a Kit Kat bar. Yum. Kind of a cross between a cracker and a chip, these crunchy Simply Good snacks are made by Carmit for people with food sensitivities (and are likely to appeal to a much wider population). They’re corn-based, gluten-, dairy- and egg-free. 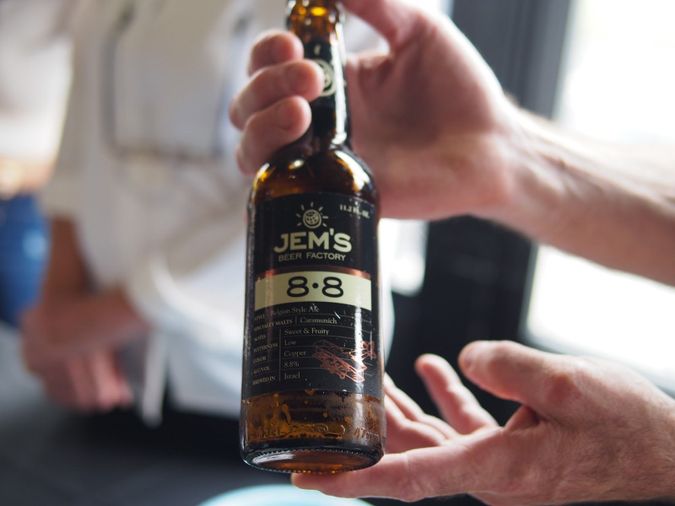 “First try this!” said Jem’s Beer Factory’s Dan Alon, pouring me a small plastic cup full of “Pils,” a Czech-style pilsner. It was good. Refreshing. Even as I took my first sip he was pouring me something else, letting me know that this was the big hit. I took a taste and immediately recognized its Belgian-ale-like qualities. He praised my palate, and showed me the label. It is indeed a Belgian-style ale, called 8*8 because of its 8.8% alcohol content.

Dan introduced me to his business partner, the Jems’ brewmaster, Jeremy (Jems) Welfeld. Both from the U.S., the two now have a number of brew pubs across Israel, including the original Jem’s location in the Industrial Zone of Petach Tikva and the newest, in Tel Aviv’s new food hall, Shuk Ha’ Tsafon.

And with that, a beer in hand, I made my way back to Manhattan.

Liza Schoenfein is senior food writer at the Forward and author of the blog Life, Death & Dinner. Find her on Instagram @LifeDeathDinner