The characters of “The Marvelous Mrs. Maisel,” heading back to the Catskills to indulge in a storied Jewish tradition. Image by Screenshot/Marvelous Mrs Maisel

There was a time when to any Jew in the know, “the mountains” meant the Catskills, and “the Catskills” meant the Borscht Belt, the site of orgiastic meals, frenzied sexual activity and cutting edge comedy. (A sampling: “Did you hear about the bum who walked up to a Jewish mother on the street and said, ‘Lady, I haven’t eaten in three days.’ ’ ‘Force yourself,’ she replied.” And yes, Woody Allen, Jerry Lewis and Jerry Seinfeld all performed there.)

The Borscht Belt was a place where Jews, having inherited the Holocaust trauma of their parents, exulted in a location where all they had to do was eat, drink and complain. The menus in places like Kutsher’s, The Concord, Grossinger’s, and the Nevele brought meaning to the phrase ‘all you can eat.’

And what was on these menus? Unsexy, comforting, old country delights like tzimmes, gefilte fish and cholent.

In an article for the Palm Beach Post, in which aging Floridian Jews were invited to share their memories, the food was often one of the most memorable aspects of the Catskills resorts. “My husband was on a two-week leave from Officer Candidate School in Fort Knox, Ky,” Marsha Slade wrote. “He was very slim, but he ate so much food that week that his uniforms did not fit when it was time to return to base.” 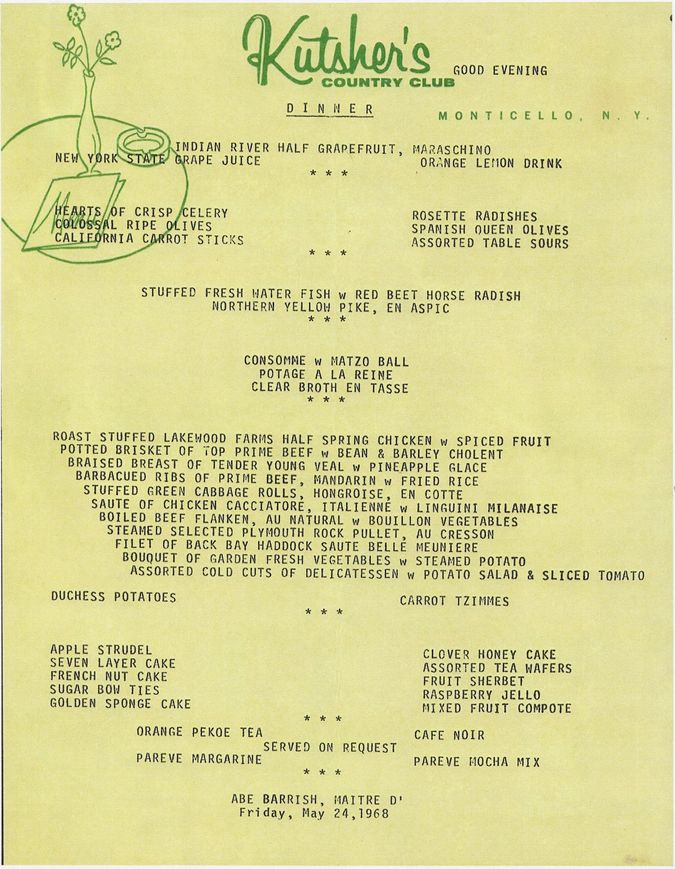 “We’re always happy to talk Borscht Belt,” Ian Rosenberg, co-creator of the documentary “Welcome To Kutsher’s,” says. In 2002, Rosenberg and his wife, Caroline Laskow, who both hail from the Midwest and had little association with the Catskills, ventured up to Kutsher’s, the old, fading Catskills resort nearing its centennial birthday. “It felt like Jewish colonial Williamsburg, like a living model of the past.”

In a lot of ways, the resort hadn’t altered a smidge from its glorious all-you-can-eat halcyon days. “On the first day during dinner, they said, ‘What would you like?’ and we ordered some appetizers and two main dishes and they said ‘Okay, what else do you want?’ We said, ‘Oh, can we wait on dessert?’ And they said, ‘No, what other entree do you want? Do you want fish? I’ll bring you some fish…’”

Rosenberg continued: “It emerged from poverty and not having enough food and having to scrimp and save. The fabulous portioning had a socioeconomic base to it.”

“It’s not fine dining, but it’s good dining,” Mark Kutsher, the keeper of Kutsher’s, says in the film. It was a parade of all the greatest hits of Jewish cuisine, from kasha varnishkas to chicken soup.

Credit can be given to these Catskills resorts for pioneering the all-inclusive vacation, offering three meals a day. A breakfast menu was a full legal page, boasting all kinds of juices, from orange to prune, eggs blintzes, a cottage cheese and fruit cup (the classic JAP diet special), herring, baked or fried, pickled salmon, baked potato, hot cereals.

“Once you get to lunch, all bets were off,” says Laskow. There was fish, soup, cabbage and chicken. Anything from chilled cali fruit soup, to cold beet borscht, kasha varnishkes, more blintzes.

“Most of our guests aren’t kosher but they like to know we keep kosher,” said Helen Kutsher.

For dinner, there was chicken paprikash, stuffed cabbage, potted beef and the like. In the Borscht Belt, they’d been serving the same foods for 100 years. There was a time in the 80s when Mark’s wife Carla tried to modernize the menu with some California cuisine (think chicken chow mein), but the results were so unpopular that the update was cancelled.

“It wasn’t fancy but it was delicious,” said Ian.

“It would be hard to imagine them doing a kale salad,” said Caroline. 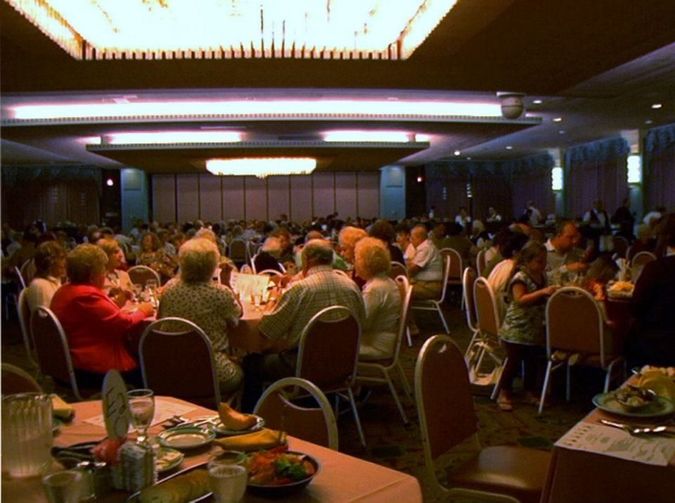 Image by Welcome to Kutsher's

Rosenberg and Laskow feel that they got the last glimpse of a grand hotel on its final legs, right before Kutsher’s creaked to a halt on Thanksgiving day of 2014.

The whole Borscht Belt thrived when it did because of anti-Semitism, “from Jews being very overtly excluded from American life,” says Laskow. “It started being an affordable economic holiday for folks on the Lower East Side, and as it became more popular, it transformed into the Dirty Dancing model.”

Then as Jews became more accepted into American society, air travel also became cheaper and more accessible, and suddenly Jews were able to go wherever they wanted to, and a whole lot of other places — Miami, in particular — suddenly became enticing.

“If you look at the Jewish community as a stand-in for other immigrant communities, then the Catskills are really a fascinating capsule of life,” said Laskow.

In the last 10-15 years, some of Catskills locals started calling the area the “Bhajan Belt” because it has become such a hotspot for meditation and wellness retreats. Even Kutsher’s, once sacrosanct Jewish ground, is currently in the process of being transformed into a wellness retreat.

Even though what was once the Catskills is now gone, the memories are far from forgotten. “Nostalgia for the good old days is intense,” writes Francine Silverman in “The Catskills Alive!” Indeed, there is such an abundant amount of Catskills-focused books that online magazine Lithub asked the question, “Is there such thing as Catskills Lit?” (And if there is, shouldn’t it be called Cat Lit?)

On season two of The Marvelous Mrs. Maisel, Midge heads to the Catskills, complete with its unending supply of tomato juice. On YouTube, one can find instructions for throwing a Mrs. Maisel-themed party. Photographer Marisa Scheinfeld spent five years amassing a photo collection of Borscht Belt ruins. At Brown University, the Catskills Institute is wholly dedicated to reliving and researching the social, religious and economic history of the Catskills. 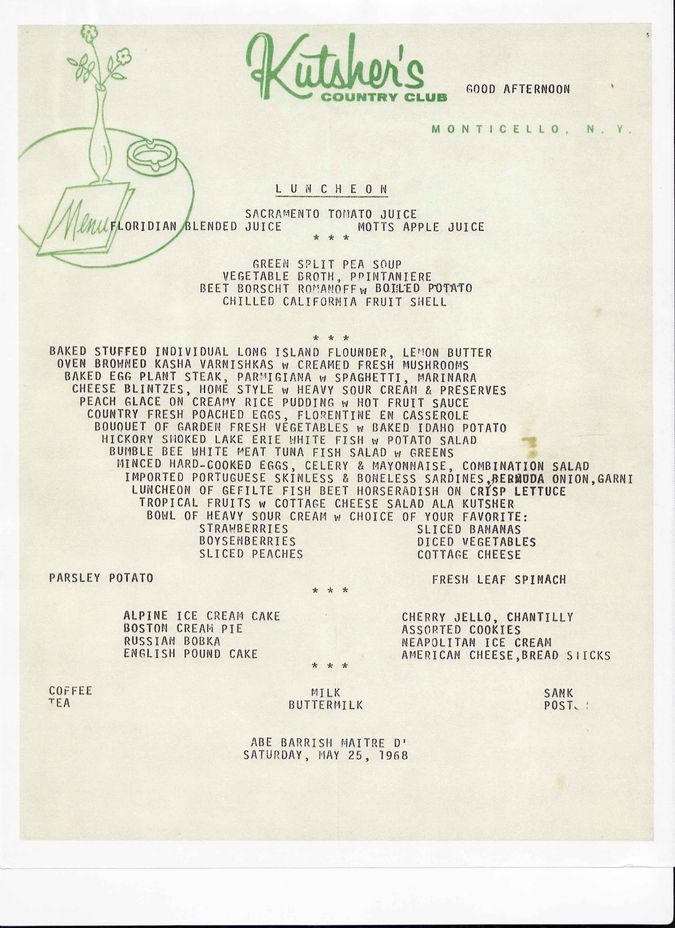 After the 2012 first Miami premiere of “Welcome To Kutsher’s,” Ian Rosenberg and Caroline Laskow discovered their cab driver to the airport was none other than Betty, the busser from Kutsher’s who’d been there 15 years. “The universe was smiling at us,” said Caroline.

‘We were delighted to hear that she had found another career late in life,” said Ian.

Like the overstuffed folks of the Borscht Belt, and most of American Jewry, Betty had moved on.