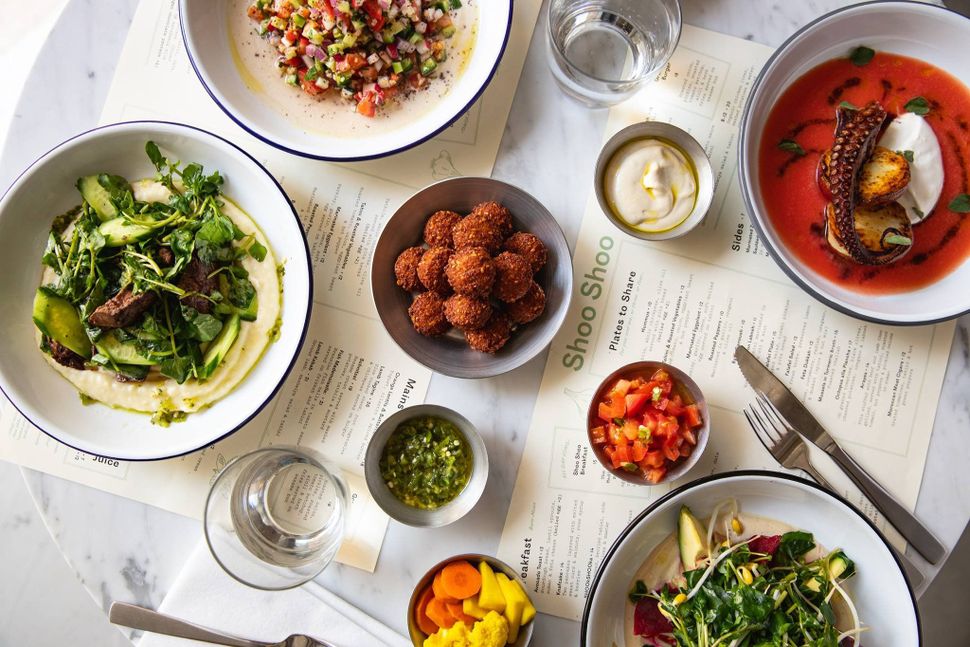 And the latest to hang up a Mediterranean-flavored shingle is Shoo Shoo, which started serving its spin on staples like falafel, hummus, sabich, and shakshuka last week.

Subtle in sophistication ? We will be closed today & tomorrow, see you for dinner on Wednesday.

Shoo Shoo’s cuisine draws on family recipes, Maman told the Forward. “The whole menu’s inspired by my childhood in Israel and my Moroccan roots,” Maman told the Forward. “One of the dishes I enjoyed growing up is the branzino fish stew – the flavors of tomato and freh fish brings me back to my grandmother’s kitchen, and I wanted to share that experience.”

Falafel and sabich are “traditional”, he said, while Shoo Shoo’s schnitzel will use a chicken thigh, rather than the usual breast, to keep the dish moist. The restaurant’s making its own tahini, hummus, and spice blends in-house.

While Shoo Shoo’s riding a trend, Maman doesn’t see Mediterranean-food fatigue setting in anytime soon. “This kind of food is made with a lot of healthy ingredients. Lemon, olive oil, fresh spices, vegetables, and fish are all part of a well-rounded and healthy diet,” he said. “Ingredients like tomatoes, when given the opportunity to shine, are really spectacular, and the simplicity of something like our chopped dalad with cucumber, tomato, radish, and bulgar is really appealing to a wide audience in NYC and beyond.”

On the more indulgent side, Shoo Shoo features cocktails with regional accents – think flavors like arak and pomegranate juice – and a wine list with Israeli options like an Adir Kerem Ben Zimra shiraz from Galilee.